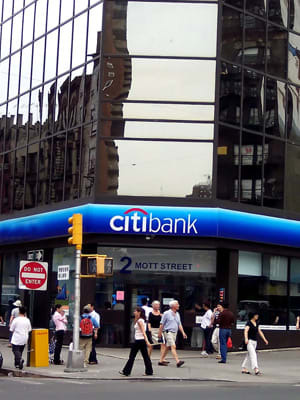 Citigroup said earnings for the three months ending in December were pegged at $1.46 per share, down 29.8% from the same period last year but well ahead of the Street consensus forecast of $1.39 per share. Citigroup's bottom line, however, was hit by one-off costs linked to the sale of some business divisions in Asia, which clipped 53 cents per share from its earnings total.

“We had a decent end to 2021 driving net income for the year up to $22 billion in what was a far better credit environment than the previous year," said CEO Jane Fraser. "Citi returned nearly $12 billion of capital to shareholders and Tangible Book Value increased 7% during the year."

"We continue to Transform our bank with a focus on simplification and building a culture of excellence," she added. "We have seen the resilience and importance of Citi as we have supported our clients through uncharted waters and we will continue to serve them with pride."

Citigroup shares were marked 2.6% lower in mid-day trading following the earnings release to change hands at $66.10 each.

Citigroup's larger rival, JPMorgan Chase, also posted stronger-than-expected fourth quarter earnings thanks in part to solid gains from investment banking fees and the release of reserves set aside during the peak of the Covid pandemic.

Looking into the coming year, the country's biggest bank said net interest income, a key measure of profitability, coming in at around $50 billion, down from the 2021 tally of around $52.5 billion and well shy of Street forecasts.

Dealogic, which compiles merger and acquisition data, said the value of global deals rose 63% from last year to $5.63 trillion, a fresh all-time high that eclipsed the 2007 record of $4.42 trillion.

Plans unveiled by General Electric GE and Johnson & Johnson JNJ to split-up their companies played a big role in this year's record total, as did the surge in deals made with so-called special purpose acquisition companies, or SPACs, lead by Singapore-based Grab's $4.5 billion merger earlier this month.