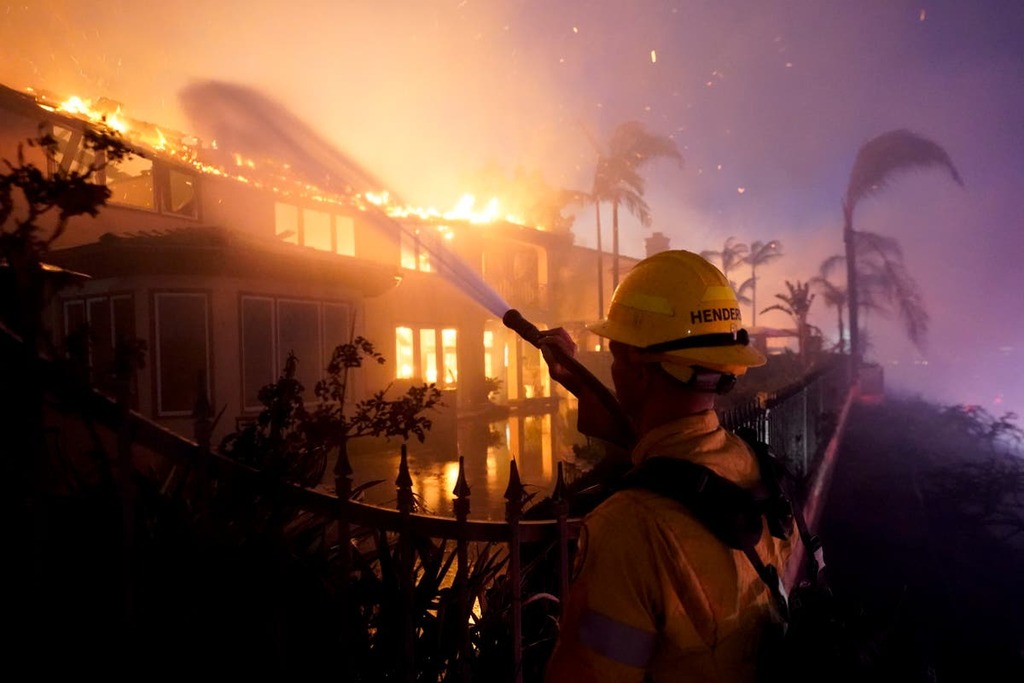 New Mexico wildfire grows; California fire destroys mansions
More people in northern New Mexico are being warned they might have to flee as a wildfire heads toward mountain…

An early morning fire that sent thick smoke over Melbourne's inner south-east has partially destroyed a South Yarra church building, devastating a school community that was using it as a kindergarten.

The fire at the Presbyterian church on Punt Road started around 6:30am, and triggered a Watch and Act fire warning for neighbouring suburbs.

Residents in a 1-kilometre radius were warned to be aware because embers were being produced from the fire.

Fire Rescue Victoria incident controller Mitch Simons said the back of the church building was "well alight" when crews arrived.

"Flames were leaping up quite high into the air with a thick, black cloud," he said.

Mr Simons said more than 30 firefighters battled the blaze and successfully prevented it from spreading to neighbouring buildings, including the South Yarra Primary School.

He said one firefighter was overcome by heat stress and treated by paramedics, while another received a minor hand injury from a burst water hose.

Mr Simons said the back of the church had been destroyed but firefighters had been able to save the front of the building, which faces onto Punt Road.

Punt Road was closed between Toorak Road and Commercial Road this morning and firefighters remained at the site today to monitor the smouldering building.

Investigators have established that the fire resulted from an electrical fault.

Christ Church Grammar School deputy principal Keith Newman said the rooms at the back of the church had been used by the school as a kindergarten.

He said he understood at least three of the five rooms the school used had been completely destroyed.

"The staff are really devastated over it, it's hit quite hard," he told ABC Radio Melbourne.

"Our kindergarten's a really beautiful part of our school and we have really strong numbers and our families love coming here and so do our students."

He said parents with students in the affected year levels had been advised to either keep their children home or bring them to a separate campus.

South Yarra Primary School, which is next to the church, closed for the day.

Peter Macfarlane saw the fire on his way to work and saw the roof of the building collapse.

"The wind was moving to the north, so embers were starting to come out of it," he said.

"It kind of felt like it was combustive, there didn't seem to be much other smoke at that point above it, so it was like it had just started."

Another witness — Alice, who lives nearby — said she could feel the warmth of the fire from her unit.

"We're quite high up so you could see right over the trees … right into the fire," she said.

She said lots of cars were trying to drive along busy Punt Road despite the road closure.

"It's been crazy … there's a lot of police, a lot of fire engines," she said.

New Mexico wildfire grows; California fire destroys mansions
More people in northern New Mexico are being warned they might have to flee as a wildfire heads toward mountain…