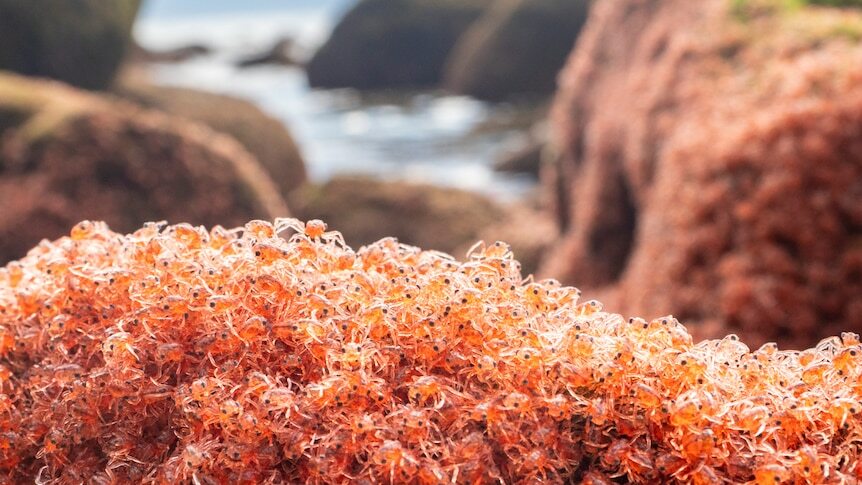 Christmas Island's famous red crab population is increasing with millions of the creatures making a comeback in the past few years.

Christmas Island National Park Invasive species program coordinator Tanya Detto said for the past 20 years the crabs' population has been fairly stable at around 40 to 50 million, but this year's survey of the adults saw a dramatic increase.

"Around 120 million of those are not breeding yet so they're less than 4cm, so they're still waiting to get to the size where they will actually migrate and breed."

In the 1990s, yellow crazy ants reached the island off the coast of Western Australia.

Since then, the pests had killed millions of red crabs.

The crazy ants spray acid into the crabs' eyes to blind them and then spray the crabs' joints with acid to immobilise them.

Scientists from La Trobe University have been working with Christmas Island National Park to eradicate the yellow crazy ants.

Dr Detto said it looked like the control measures scientists put in place had helped the population.

But Dr Detto said the main reason the population had grown four-fold in six years was down to large returns from the annual red crab migration in recent years.

Every year millions of red crabs emerge from the jungles of Christmas Island and make their way to the ocean to breed and lay eggs.

Last year the crabs started their migration in early November, after the first rains of the wet season.

Dr Detto has been on the island for 11 years and said it was one of the biggest adult migrations she had ever witnessed.

It is estimated last year around 35 million female red crabs produced around 70,000 eggs each.

"We estimate there might have been 2.5 trillion babies released into the water and then we have no idea how many have survived and made it up to land," Dr Detto said.

"It's just impossible to count how many babies have actually made it to shore."

It is a mystery to scientists what happens once the eggs hatch in the ocean and the larvae swim away.

But on Christmas Eve, the baby crabs, which had grown to around 5mm, emerged from the water to make their way back to the jungle.

Everywhere the crabs moved in a group turned to red.

Dr Detto said the east coast and north coast of the island had seen large numbers of the babies emerging from the sea, but there had been nothing on the south or west coast.

'While it's a big year, it's not one of the biggest years we've had lately," she said.

In the past month, there had been a large number of whale sharks around the island.

"I do know that a lot of fishermen have been recording catching fish and then seeing in the stomachs of the fish, like flying fish and wahoo, masses of baby crabs, so the whale sharks aren't the only thing benefiting from the babies in the water."

Dr Detto said in 2014–2015 there was a spike in the number of babies emerging from the water, which had ultimately led to an increase in the adult population in 2021.

"Also the improved traffic management around town and across the island helps," she said.

"We probably killed lots of crabs a few decades ago with no traffic management."

The babies are still making their way up the plateaus, with locals using leaf blowers to help move the babies off the roads.