When Vincent Hernandez arrived in Australia from France, he loved it – but noticed something was missing. A European Christmas.

So in 2018 the festival director launched a Christmas in July celebration in Sydney’s Rocks district, to bring the festive season he knew so well from home down under.

“For any Europeans living in Australia … Christmas should be in winter,” he says. “All the good things that come with the comfort food, the cheese, mulled wine are for winter.”

His market, which emulates traditional Christmas celebrations in Strasbourg, “went crazy”, and is expanding to the ACT.

“It’s eclectic, but it’s how we’d do it in France, having a great moment with family or friends, enjoying great food, having a nice drink and a good time,” he says. “It’s a cultural experience. People say ‘where’s Santa?’ and I say ‘Santa is not in Strasbourg’.”

With July upon us, it’s time for puffer jackets, large electricity bills and, for the festive of spirit, Christmas celebrations.

Australia may be known abroad for its blistering summers and sandy beaches but that doesn’t mean we can’t do the chilly season right.

Here are the top things you can do this year to escape the winter blues.

There’s no better excuse to escape the city than East Gippsland’s annual winter festival. Over three and a half weeks, locals bring the community’s creative sector to life with pop-up art installations, wine and craft beer, winter feasts and live music. The program this year is packed, including a number of free and kid-friendly events.

Winter Wild takes place over four days in the heart of Apollo Bay. Not just a popular summer destination, the Otway coast is transformed come winter into a hub of art, music, food and culture. This year has a number of program highlights including a performance from beloved Melbourne punks Amyl and the Sniffers, and a free outdoor Wild Feast of smokehouse barbecues and giant paella pans.

After a two-year hiatus, Bondi festival is back with a vengeance this season featuring the iconic Bondi Vista Ferris Wheel, the “world famous” ice rink and an abundance of theatre shows and comedy. There’s nothing like a belly laugh to warm an icy heart.

Over two weeks this July, Bathurst shopfronts are set to be transformed with bright colours and artscapes as part of the Illumination Light Walk, outdoor ice skating is back and food, art, music and rides are all returning. Fun for the kids, and the grown ups.

There may be no better place to celebrate Christmas in July than the Blue Mountains, set against a backdrop of clifftops and snowfall. The mountains’ grandest hotels transform during Yulefest with festive feasts, carols and spicy mulled wine bringing an abundance of winter cheer across the region.

Be sure to return in August, when Katoomba’s Winter Magic festival puts on 13 stages of live acts, alongside illuminations and stalls. Dress up and costume is encouraged.

Orange Winter Fire festival brings the heat to the central tablelands with jam packed events, viking feasts and the region’s best red wines to be sampled by toasty fires. Enjoy the Field Days Big Bonfire with expansive views of Borenore or book your own private space at Stockman’s Ridge Wines.

If singing to an apple tree by firelight is your thing, the Huon Valley Mid-Winter festival is for you. Over one packed weekend, an eclectic mix of musicians descend on the valley alongside storytelling events and lengthy sit down meals paired to barrel aged ciders. Prepare your pagan gear, there are prizes for best dressed costumes, too.

Is it possible to sing yourself warm? There’s only one way to find out at Tasmania’s iconic Festival of Voices. The first winter festival to grace the state is turning 17 this year, envisioned to bring light and joy to residents in the traditionally frosty season. This year is no exception, showcasing a wide range of choirs, chorals and gospel ballads.

There may be no better place to emulate the northern hemisphere’s December chill than Canberra. This July, head to Parkes for a French inspired food, wine and winter market featuring wood huts, Christmas lights, melted cheese stations, snow and mulled wine bars. Did I mention melted cheese stations? It’ll feel just like 25 December. The festival moves to Sydney’s Rocks district on 14 – 17 July, sans the campfires and roasted marshmallows.

Over two months, winter’s most decadent treat is king in the ACT region when the Canberra Truffle festival comes to town, a gourmet affair showcasing the very best truffles have to offer. Truffle farms, restaurants, wineries and galleries are all involved this year, with signature menus, truffle and wine pairings and cooking classes on offer. Yum.

There’s something for everyone in Western Australia this winter with more than 40 events spanning Busselton to Margaret River, showcasing the best of a winter in the west. With cheese toastie battles, a night of pinot noir, six-course degustations and fireside fondue sessions, pallets are set to be well and truly quenched.

For the whole month of July, Illuminate Adelaide is returning to light up the city with art, laser shows, music and performances. This year, the Gorillaz are headlining the program, while a new ice skating rink will boast live DJs every weekend. 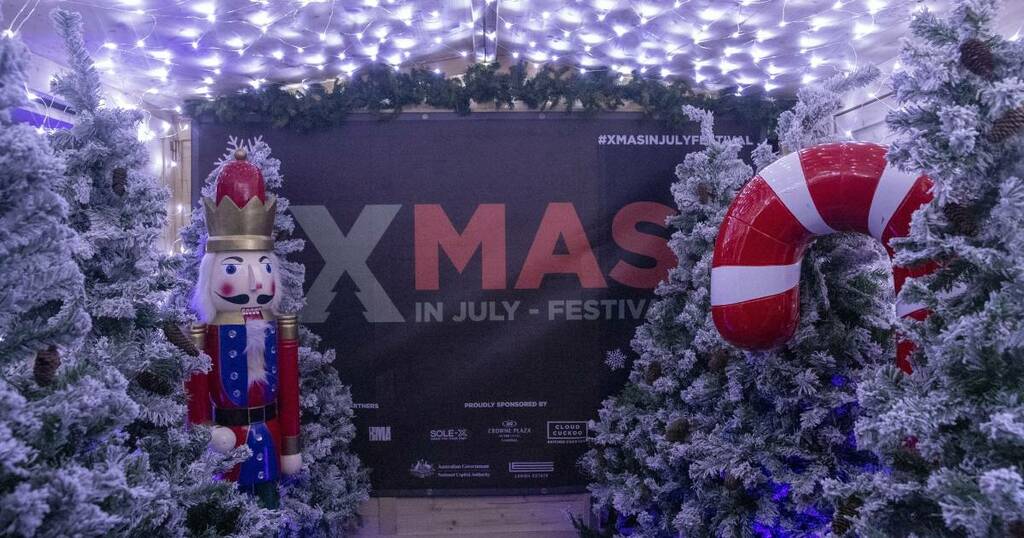 Christmas comes early to the capital as festival kicks off
Dust off your ugliest Christmas jumper, it's time to get festive

The Canberra Times
One subscription that gives you access to news from hundreds of sites
Mulled wine: how 'Christmas in a cup' went from ancient medicine to an Aussie winter warmer

When the temperature drops in the southern hemisphere, you might like to stave off the chill with a big steaming…

The Conversation
Hipster bars, perfect bakeries and a restaurant where you may spot Dua Lipa: The Greater Manchester borough that's getting its moment in the spotlight

It has loads to offer