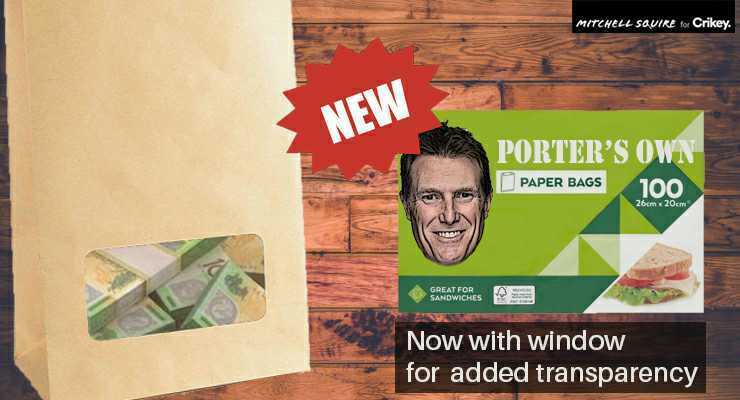 Accountability and transparency are the hallmarks of a functional democratic government.

The Australian Parliament, each time it first sits, passes a resolution requiring all members to record in the register of members’ interests all registrable interests held by them, their spouses and children.

The list of registrable interests includes all shareholdings, beneficial interests in trusts, real estate, financial investments, directorships, liabilities, sources of income, gifts worth more than $300 — including sponsored travel or hospitality, memberships and anything else that could look like causing a conflict of interest.

There is no doubt that if an MP is the beneficiary of someone paying a debt on their behalf, such as legal fees they have incurred, that is a registrable interest and must be disclosed.

The media has been waiting keenly for former attorney-general Christian Porter to get around to disclosing who has been paying legal fees he’s been incurring in his defamation case against the ABC (now settled) and his intervention in the case between Jo Dyer and Sue Chrysanthou SC (now on appeal, and in which my firm is representing Dyer).

The disclosure has been made, and it is a model of opacity. Included is this statement, regarding who has been paying his lawyers:

Part contribution to the payment of my fees by a blind trust known as the Legal Services Trust. As a potential beneficiary I have no access to information about the conduct and funding of the trust.

A blind trust is a legal structure used when the owner of assets wants to be shielded from having any knowledge or control over how those assets are used. A typical example is that often when people become president of the United States, they will place their personal assets in a blind trust so they can’t be accused of having a conflict of interest when they make decisions which might benefit them financially. Under the terms of the trust, the trustee has absolute control and the beneficiary knows literally nothing.

The employment of this mechanism to Porter’s situation is very interesting. It’s not his money that’s in the trust; that will be someone else’s. That person, the benefactor, has appointed a third person, the trustee, to control the money and decide how it’s spent. As Porter has disclosed, the trustee has decided to spend some of the benefactor’s money on Porter’s legal costs.

Clearly the benefactor does not wish their identity to be publicly known, and nor does Porter. He says he doesn’t know where the money is coming from or why it is being spent for his personal benefit. He just happens to have a fairy godmother. What a stroke of luck!

From the perspective of accountability and transparency, this is, well, problematic. Someone is paying legal fees on behalf of a senior cabinet minister, but we may not know who they are. You can see the immediate problem with that.

However, there is a much larger concern than Porter’s brazen attempt to avoid scrutiny by insisting that an unknown dog paid his legal fees.

Say Porter’s declaration is compliant, in that he has declared his interest to the full extent of his knowledge and can’t say more because the blind trust structure prevents him from knowing more. And say his mystery benefactor decides to set up another blind trust, called the Car Services Trust. They put a fresh bucket of money in that trust, appointing a trustee to decide what to do with it, and the trustee decides to use it to buy Porter a Ferrari.

One day Porter comes home and finds a Ferrari in his driveway, with a note on the windscreen saying “With compliments from the Car Services Trust, which by the way is a blind trust”. Porter, properly, updates the register to disclose his receipt of the car, noting that it came from a blind trust and “as a potential beneficiary I have no access to information about the conduct and funding of the trust”. He doesn’t even know who to return it to if he doesn’t want to keep it.

Facetious, of course. As if that’d ever happen. But how long before other MPs start making disclosures of donations they’ve received from blind trusts? If Porter has found a viable loophole there is nothing to stop the blind trust structure from being used to make all kinds of completely opaque gifts to politicians, who won’t have to disclose the ultimate source because they ostensibly don’t know who it is.

The range of possible identities of the benefactor paying Porter’s legal fees includes every human and corporate entity in Australia, and indeed the world. It could be the Ku Klux Klan, Nicky Minaj, the government of Chad, or Rupert Murdoch. It probably isn’t any of them, but your guess is as good as mine.

A completely satisfactory state of affairs. A+ for integrity.