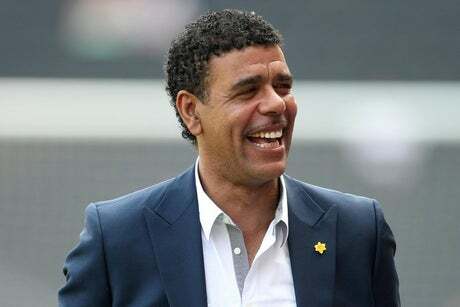 Chris Kamara posts health update as ‘recovery continues’ after Sky Sports departure
Chris Kamara shared a selfie with fans as he continued his recovery from a health condition.

The funny incident happened on Wembley Way ahead of Liverpool's FA Cup final victory against Chelsea on Saturday, the club's…

Chris Kamara has posted an update on his health battle as he continues to fight his speech condition.

The former Middlesbrough and Leeds United midfielder announced his departure from Sky Sports earlier in the year after suffering from apraxia of the speech as a result of medical issues. He has continued to work on the show alongside host Jeff Stelling while dealing with the health problem.

While working on Soccer Saturday, he has also been co-commentating on ITV show The Games - where he has done that for the entire week. On Saturday morning, Kamara spent time in an oxygen chamber and delivered an update to fans on Twitter.

He said: "Enjoyable days working on The Games. Back in the Oxygen chamber today as the recovery continues."

Kamara, who also featured for Stoke City, Swindon Town and Brentford during his career, spent over two decades at Sky Sports before deciding to leave the company. Upon his departure, he offered a heartfelt message to fans.

His statement read: "My long career at Sky Sports has never felt like work. I've spent 24 terrific years at Sky, and leave with the best of memories. My time on Soccer AM, Goals on Sunday and, of course, on Soccer Saturday with Jeff has been - to coin a phrase - unbelievable. I've had the time of my life, and look forward to tuning in every Saturday as a fan."

In 2012, Kamara made a special appearance for Mid Wales Football League side Welshpool Town, after Stelling mocked the club live on air following their 10-1 defeat against Waterloo Rovers the week prior. Two years later, he appeared for the second time for Welshpool in a 4-1 defeat. This proved to be the final 11-a-side game he played in his career.

Since, Kamara has been a regular on Sky Sports and Stelling was one of the first to lead the tributes. He said: "The man is simply a genius, he's an absolute genius.

"I can say from my point of view it's been a privilege to work with Kammy for so long, he's a key part of the Soccer Saturday success story.

"His warmth, his energy, his humour, his ability to misread cards. No one worked harder. He's a good man, one of the very best, great friend, I will miss him enormously. Good luck Kammy!"

Chris Kamara posts health update as ‘recovery continues’ after Sky Sports departure
Chris Kamara shared a selfie with fans as he continued his recovery from a health condition.

The funny incident happened on Wembley Way ahead of Liverpool's FA Cup final victory against Chelsea on Saturday, the club's…