Thanks to his Avengers character Thor, Chris Hemsworth’s on-screen presence is undisputed, but it’s his wife, Spanish actor and model Elsa Pataky, who is stealing the limelight this week.

In between raising their three children – India, 10, and eight-year-old twins Tristan and Sasha – in the NSW hotspot of Byron Bay, Pataky says she has always dreamed of being a “female Indiana Jones” in a movie, and now she is, except instead of rescuing prized artefacts, she’s saving the world from a nuclear attack.

Doing the rounds before the film’s premiere on Wednesday, Pataky (Snakes on a Plane, Fast & Furious franchise) told Ten’s The Project it was a whole lot of fun being an action hero.

She also delivered a few home truths about her husband, the strongest Avenger in the world, who has taken a key behind-the-scenes role on set this time, as executive producer.

“He is so bossy,” she laughed.

“He was just telling me, this is the right angle when you punch. He was showing me the right position you had to have,” she said, appreciating that he had, in fact, been doing action scenes for a long time.

Husband and wife on set together

Pataky says it was “great” having her husband on set, and that he had been supporting her since the script landed their way.

Previously, Hemsworth has assumed the EP role on only one other film, Thor: Love and Thunder (in cinemas July 7), and on two documentaries Andy Irons: Kissed By God (2018) and Shark Beach with Chris Hemsworth (2021).

He produced Extraction (2020) and Spiderhead (2022) and is producing an untitled Hulk Hogan biopic, in which he plays US professional wrestler Terry Bollea, aka Hulk Hogan, according to IMDb.

“He has been supporting me since the beginning when he read the script,” Pataky said. “He said: ‘You’re going to be fine. You’re going to enjoy it. I know how much you like doing these movies’.

“It’s like a marriage, you work it out. It was great. It was different.

“[As executive producer], he supports you … [it’s] even easier than when we’re married every day,” she said of her Hollywood A-list star husband, who, besides the Avengers superhero franchise, has also played the action hero many times, including Extraction, Snow White and The Huntsman: Winter War.

The Project panellist Kate Langbroek delicately asked whether she was his first choice to be cast in the lead, given he was the boss.

Laughing, Pataky replied, demonstrating the throttle-around-neck action with her hands: “I was almost threatening him if he didn’t get me for that role.”

Pataky is no stranger to hard work, revealing her incredible fitness and wellness regime in her 2019 bestseller, Strong, where she wrote in detail about her daily routine.

For this role, she says she underwent months of “military training” and on-set rehearsals with stunt specialists for hours on end.

“It was a lot of training. I knew how much work it is to do an action movie because I’ve seen Chris, how hard he works in these movies.

“We started five months [ago] with full-on military training … and then we started on training for the fights [there are six major fight scenes all up], 100 moves you have to memorise and do again … do every day, four hours a day.

“You have to know all the moves in your head,” she said.

“It was a real challenge for me, but I really enjoyed the process.”

She worked with stunt double Haley Wright (Wonder Woman, Free Guy) and stunt co-ordinator Ingrid Kleinig (Suicide Squad, Justice League) to “develop a fighting style that utilised speed and agility to overcome her male opponents since she has a different centre of gravity than the men she squares off against”.

Both parents can ‘kick-ass’ in movies

Speaking to ET Online on Monday, Pataky said it was important for her daughter, India, to see women can also “kick ass” in movies.

“In the house, Chris is the action man,” she said. “So, it was good to show both. Especially my daughter.

“She was pretty shocked when she saw the trailer and was like, ‘Wow mum, you can do that?’ They had the idea of like [the action star] being dad.

“So, showing that women are capable also, not only being a mum and taking you to school but to kick ass too.”

And what about together on screen?

As she told Sydney radio 2GB: “We both are passionate … It’s a great thing to do together.”

Interceptor is in cinemas from May 26, streaming on Netflix from June 3. 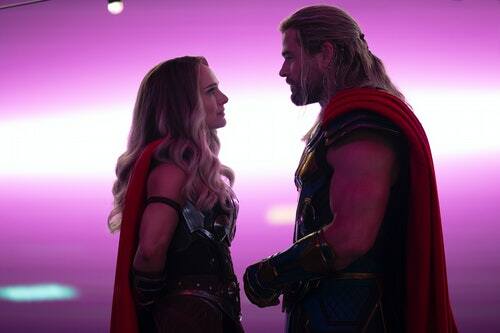 'Thor: Love and Thunder' director teases a huge 'Thor 5' spoiler
Natalie Portman is back as Jane Foster to wield the hammer of Mjolnir in the MCU. But just how long…

Inverse
One subscription that gives you access to news from hundreds of sites
Trailer gives fans first look at Christian Bale, Russell Crowe in Thor franchise

Fans have caught a glimpse at Christian Bale and Russell Crowe in the full-length trailer for Marvel's upcoming film, Thor:…