Hollywood’s ‘80s obsession doesn’t end with Stranger Things. If anything, Chip ‘n Dale: Rescue Rangers is proof that the toons from many peoples’ childhoods can not only make a comeback but can also be revived in a way that makes the source material feel like the first draft.

And before you ignore it on Disney+ because you think, “I’ve seen this movie before,” think again! The three-decades-later Disney Afternoon reboot is way more than a Who Framed Roger Rabbit 2.0 and — dare we at Inverse say it — may be required watching for anyone who claims they love cartoons. Chip ‘n Dale: Rescue Rangers is a romp around a meta and multi-studio Toontown-in-Tinseltown that serves as an ode to (and diss track of) animation.

The small-but-mighty squirrelly duo of sardonic Chip and schmaltzy Dale are reimagined as washed-up actors and wannabe detectives with — thankfully — no Alvin and the Chipmunks pitches. The new movie will have you rooting for Disney's oldest anthropomorphic bromance with lines crammed with smart jests, scenes packed with goofs, and a ton of heart.

The beloved after-school program’s return is done nearly perfectly right, with enough fan service for those who grew up with Rescue Rangers and enough references to modern Hollywood that all audiences will appreciate.

If you were a kid in the 80s, you likely tuned your TV on weekday afternoons and stopped at the sound of Mark Mueller’s infectious “Ch-ch-ch-Chip and Dale, Rescue Rangeeeeeers” theme for the animated adventure comedy. Created by Tad Stones and Alan Zaslove (Darkwing Duck, Aladdin the TV Series), the show premiered on The Disney Channel in the spring of 1989 and aired three seasons worth of episodes (65) until the onset of winter in 1990.

The series starred Chip (Tress MacNeille) and Dale (Corey Burton), the two beloved chipmunk bros that first scuttled their way onto Disney way back in 1943, who start a detective agency along with their pint-sized rodent pals Monterey Jack and Gadget Hackwrench, and spunky insect Zipper.

The Chip ‘n Dale: Rescue Rangers of 2022 brings back the old gang in a surprising way, acknowledging the years since the wrap-up of Rescue Rangers, a show cancellation that the film establishes as Dale’s (Samberg) fault for wanting to branch out in a solo project after getting tired of always being the “second banana” to Chip (Mulaney). The oddball couple, which first meets at school and instantly becomes BFFs, go their separate ways after the fallout of Rescue Rangers. One becomes a reluctant insurance agent, and the other is potentially an ironic Chippendales “guest star” and former-star turned micro-influencer. The two soon take on the role of a lifetime — real-life amateur investigators — after one of their mutual friends with a stinky cheese addiction goes missing.

“Rescue Rangers got a facelift that looks almost as good as Dale’s CGI makeover.”

One of the movie's best decisions is how it understands its story hinges on a silly premise — Chip is right; no one has been hankering for a Rescue Rangers return! It gives the movie the freedom to not take itself too seriously. Its wackiness retains wit, doing a fantastic job praising Disney’s contribution to the animation landscape over the past 30 years (including Rescue Rangers’ bite-sized place in that period). Simultaneously, it disses Disney and its animation “rivals” Dreamworks, Nickelodeon, and Cartoon Network (among others), making a caricature of Hollywood’s obsession with nostalgia pandering.

This Disney Afternoon remix would have been truly close to perfection in how well it juggles the medium it celebrates and spoofs. However, the powers that be at Walt Disney Pictures and Mandeville Films made the highly questionable call to indirectly revise the tragic history of Bobby Driscoll, the voice behind Peter Pan, whose acting trajectory was dramatically altered by the termination of his contract with Disney.

Chip ‘n Dale: Rescue Rangers had a wide array of animated characters to choose from as its main antagonist — I mean, Gaston from Beauty and the Beast was right there! Instead, it chose an aged-up Peter Pan (Arnett) who goes to Russian baths, kidnaps The Little Mermaid’s Flounder when he falls behind on his krill payments, and turns reject Shrek toys into toilets.

“Sweet Pete” explains to Chip and Dale in one scene that his desperation and solitude after being kicked out of Disney once he got “too old” for the role turned him to a life of cartoon crime. (Yikes.)

The loss of Driscoll’s career, which included Disney’s Song of the South, Melody Time, and Treasure Island, greatly impacted the actor. He turned to drugs and died homeless and alone at 31. Obviously, his death cannot be “blamed” on Disney, but his ousting from a promising profession certainly did not help the circumstances that led to it.

We do hope that future Rescue Rangers projects and potential IP resurrections of this nature— Darkwing Duck makes a strong case for his feature-length comeback in the post-credits scene — pay closer attention to Disney’s real-life history, which hasn’t always been the happiest place on Earth for some of its talent or staffers.

Audiences shouldn’t look past this unfortunate Chip ‘n Dale: Rescue Rangers fluke (the only glaring one). But they should consider the movie as a whole — a sidesplitting 97 minutes of jokes that land for the ‘80s kids and don’t feel out-of-touch for new audiences. The straight-to-Disney+ buddy cop movie offers an exciting taste of what Disney can achieve when it decides to take risks, and gets clever when it dusts off its extensive archives.

Rescue Rangers got a facelift that looks almost as good as Dale’s CGI makeover. This rejuvenation will leave viewers, like me, wanting more of the chipmunks. 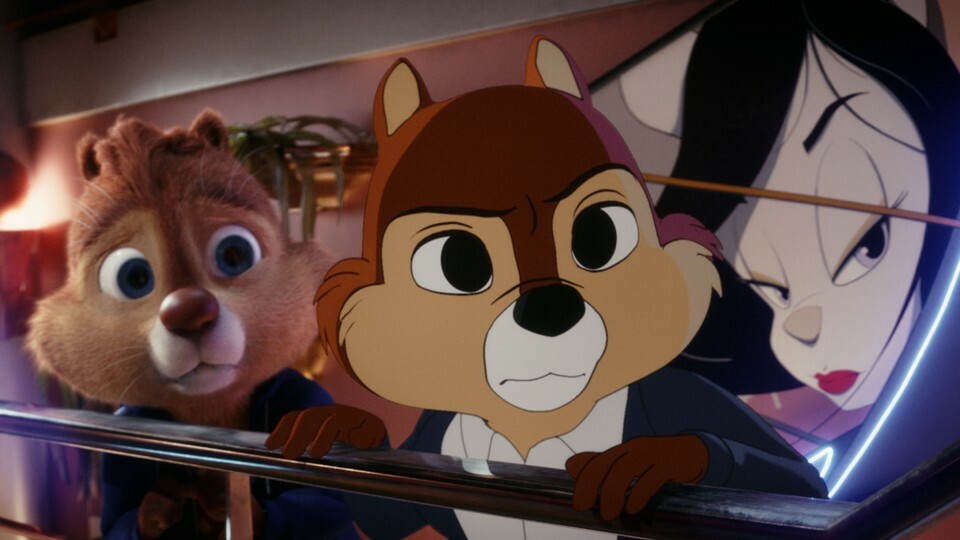