Hollywood loves a good comeback story, and the new Disney+ film Chip ’n Dale: Rescue Rangers has a great one. No, not that of the titular chipmunk heroes, starring in their first project since the 1990 conclusion of their animated series. I’m talking about the return of “Ugly Sonic”—an unsettling version of Sonic the Hedgehog with human teeth, beady eyes, and a weirdly elongated body that you might remember from 2020 before a hasty redesign salvaged his live-action movie debut. To media-savvy fans, Ugly Sonic is an amusing pop-culture footnote. But in this Chip ’n Dale reboot, he’s just another actor who couldn’t quite crack success in Tinseltown.

The return of Ugly Sonic is one of the biggest reasons to recommend Chip ’n Dale: Rescue Rangers, because it exemplifies the kind of humor on display in the rest of Akiva Schaffer’s film. Loyal viewers of the Disney Afternoon cartoon block expecting a faithful update might be disappointed; then again, I can’t imagine many people were really craving a straightforward adventure story about two chipmunks who run a detective agency. Instead, this movie is like a modernized Who Framed Roger Rabbit, set in a world where animated creatures are participating members of human society, and Chip and Dale are actors who have fallen on hard times since their show’s cancellation.

Roger Rabbit, which is maybe Robert Zemeckis’s greatest film and one of the most innovative movie satires ever produced, is a big act to follow. Chip ’n Dale isn’t quite at the same level. But it’s a cute and cheeky send-up of the film industry’s revival-hungriness, crammed with meta cameos and background in-jokes, and told with the zippy style of Schaffer’s previous showbiz satire, the underrated Popstar: Never Stop Never Stopping. The director has reunited with his Lonely Island comrade Andy Samberg, who voices the happy-go-lucky doofus Dale, while John Mulaney lends mordant energy to his straight-arrow partner, Chip.

Unlike most legacy sequels, Chip ’n Dale seems aware that the property it’s adapting hasn’t garnered much nostalgia. I was a devoted Disney Afternoon viewer as a child (DuckTales and TaleSpin were among the other syndicated offerings), and I can only vaguely recall whatever it is that Chip and Dale actually got up to week to week. The film’s script (by Dan Gregor and Doug Mand) is more interested in taking aim at the very idea of corporate nostalgia—the “only ’90s kids remember” retro aesthetic that clogs many Millennial meme pages.

[Read: 26 brilliant movies that critics were wrong about]

In Chip ’n Dale, Dale is trying to ride that trend to a comeback. Hoping to spruce up his look after his show’s cancellation, Dale has gotten experimental CGI surgery so that he resembles the 3-D-animated creatures that populate children’s movies today, complete with realistic fur and bulging eyes. Chip remains the traditionally two-dimensional, cel-shaded creation of yesteryear, and has switched to a more mundane career selling insurance. But when Dale reconnects with him, they get sucked into trying to solve the case of their missing pal Monterey Jack (voiced by Eric Bana), a former cast member of theirs.

As with Roger Rabbit, the central mystery has links to the Hollywood underworld; this time, however, that setting is updated to the industry as audiences now know it. The film digs into the cheap animated knockoffs that pervade streaming services today. That space is where characters such as Ugly Sonic are languishing, alongside Sweet Pete (Will Arnett), a middle-aged, beer-bellied version of Disney’s Peter Pan; and (most amusingly) a glassy-eyed CGI Viking warrior played by Seth Rogen, who resembles the eerie mannequins of 2000s films such as The Polar Express and Beowulf. In Chip ’n Dale, all of these forgotten figures continue to toil in obscurity, fighting for even a scrap of relevance amid so many flashy, new brands.

If this plot sounds a little too serious and on-the-nose, rest assured, it isn’t. Schaffer and company get goofy while illustrating their point, by, for example, inserting a poster for a movie called Batman vs. E.T. and another advertising Meryl Streep as Mr. Doubtfire. And a solid emotional bedrock grounds Chip, who has given up on fame, and Dale, who needs it to feel validated, as they work to rebuild their friendship. (Samberg and Mulaney’s easy chemistry also helps.) The movie works mostly because, through its weird tricks of animation and self-referentiality, it somehow finds a fresh satirical angle. Other films have skewered an industry that’s intent on bludgeoning audiences with their own fading memories, but only Chip ’n Dale actually gives those memories a new life. 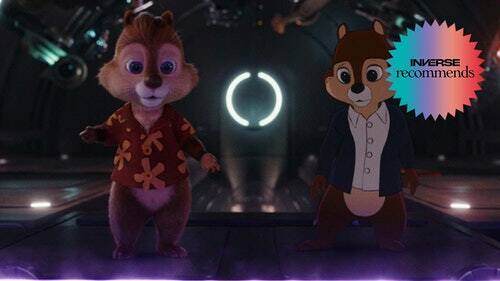 'Chip 'n Dale Rescue Rangers' review: A riotous ode to animation reimagines a classic
Chip ‘n Dale returns with a new movie on Disney+ that pays homage to the history of animation.