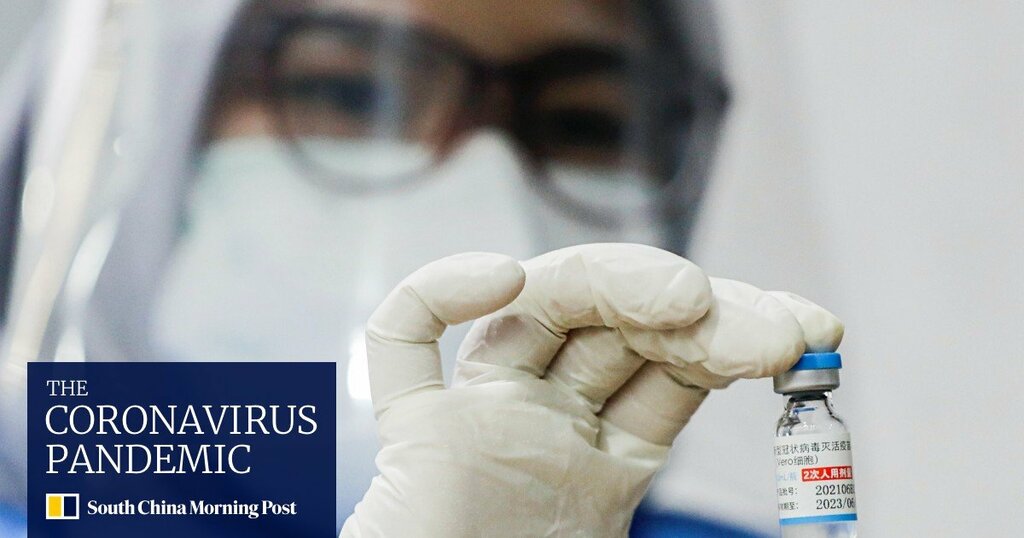 China has exported nearly 1 billion doses of Covid-19 vaccines to over 60 countries and pledged 2 billion doses this year, but just how effective the Chinese jabs are, especially against more transmissible or resistant variants, was initially unclear.

The knowledge gap has been partially filled with publication of some large real-world effectiveness studies in countries where the Delta and Gamma variants have been prevalent.

Researchers concluded that the Chinese vaccines were less effective than other vaccines but still offered valuable protection against severe illness or death. Experts argued that the Chinese jabs – approved by the World Health Organization (WHO) for emergency use – were worth having for countries in need.

A study in Bahrain, published last month before peer review, compared four Covid-19 vaccines – the Sinopharm, AstraZeneca, Pfizer-BioNTech and Sputnik shots – between December and July. It found that the Sinopharm vaccine, though effective in preventing hospitalisation and death, worked less well than the others, especially for people aged over 50.

In Brazil, where the Gamma variant has been prevalent, a study published last month involving 76 million vaccinated people found that the AstraZeneca vaccine offered about 90 per cent effectiveness against hospitalisation, ICU admission and death, while the vaccine produced by Sinovac, another Chinese developer, provided about 75 per cent such protection.

The differences in effectiveness may be attributable to the different technologies used, researchers wrote. Inactivated vaccines such as those of Sinopharm and Sinovac use a killed version of the germ to destroy disease-producing capacity, while adenovirus-vectored vaccine use a modified, harmless virus to trigger an immune response.

A study in Chile published this month in The New England Journal of Medicine found the Sinovac shot CoronaVac was effective in preventing infection by 65.9 per cent, hospitalisation by 87.5 per cent, ICU admission by 90.3 per cent, and death by 86.3 per cent.

The Chilean government last month released a report that found CoronaVac was 58.5 per cent effective against symptomatic illness, compared with 87.7 per cent for Pfizer-BioNTech’s vaccine and 68.7 per cent for AstraZeneca’s.

But such comparisons may not always be fair on inactivated vaccines, according to Zheng Zhongwei, a National Health Commission official who heads China’s Covid-19 vaccine development task force.

He said immunity of all Covid-19 vaccines waned after three months and in some countries the inactivated vaccines were administered “two or three months” earlier, before other vaccines arrived.

“I don’t want to say which vaccine offers better protection but I hope this can be viewed in a more scientific way,” Zheng said.

The WHO said vaccines could not be compared head-to-head, because of differing approaches to designing the various studies. The agency said all vaccines it approved for emergency use were highly effective in preventing severe Covid-19.

Dr Annelies Wilder-Smith, a consultant to the WHO, and Dr Kim Mulholland, a member of the WHO Strategic Advisory Group of Experts on Immunisation, said in an editorial alongside the Chilean Sinovac study that the jab’s effectiveness was still “substantial” and comparisons “may be explained in part by a combination of poor effectiveness against mild or asymptomatic infection and waning effectiveness”.

They called for urgent mix-and-match studies of Sinovac and other inactivated vaccines, and said waning protection indicated booster shots may be needed.

China has already announced it will offer a third dose of inactivated vaccine as a booster to the elderly and high-risk people. In the United Arab Emirates, Bahrain, Indonesia and Brazil, viral-vectored or mRNA vaccines have been offered to the elderly and health care workers.

Amid doubts over the effectiveness of Chinese vaccines, some countries are turning down those being offered to low and middle-income countries through the Covax Facility, a global initiative for equitable access to vaccines.

Sinovac and Sinopharm agreed to provide a combined 110 million doses between July and September with an option for a further 440 million by next June, via Covax. Beijing has pledged to provide 2 billion doses this year, and has so far provided 990 million – mostly inactivated.

South Africa, listed by Covax as having one of Africa’s largest allocations of Chinese shots, with 2.5 million Sinovac doses, had not accepted them, citing insufficient information on efficacy against the Delta variant and in populations with HIV, Reuters reported.

Nigeria, the largest recipient of Chinese shots in Africa via Covax, with an allocation of nearly 8 million Sinopharm doses, approved the vaccine but called it only a “potential” option for inoculating its population, the report said.

In Thailand, where people have been given a dose of CoronaVac followed by a dose of AstraZeneca’s shot, the Chinese embassy this month urged against “underestimating and defaming Chinese vaccines”.

“Long-term efficacy is uncertain for all vaccines,” Hsu added. “At this stage, countries should deploy what they have rather than wait for mRNA or viral-vector vaccines.”

Jin Dongyan, a virologist from the University of Hong Kong, said low-income countries that needed vaccines should not turn down inactivated jabs.

“If they are offered Pfizer-BioNTech vaccines, great, but Sinovac and Sinopharm are still helpful,” Dongyan said. “For countries with no access to other vaccines, a good way is still to have Sinopharm or Sinovac. It’s not ideal, but it’s better than no vaccine.”