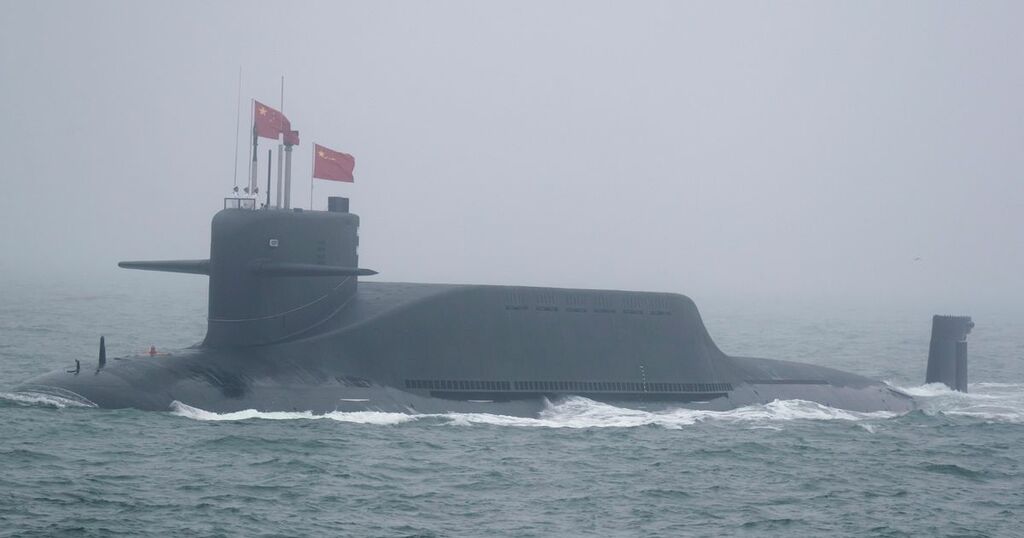 China has upgraded its 'humpback' Type 094 nuclear submarines that have the ability to hit the US.

The subs are said to be able to carry China's JL-3 'Big Wave' missiles, which have a range of 7,500 miles and could devastate US cities.

The 'Jin' class submarines, which are nuclear powered, have been modified to hide their ID numbers and also to reduce their noise.

The underwater vessels are now stealthier than ever and are roaming the Pacific amid rising tensions between China and the US.

President Xi Jingping has recently renewed calls for Taiwan to become part of China, sending a record number of Chinese warplanes into the country's airspace.

The US has pledged to defend Taiwan and its independence.

Despite China's efforts to reduce the noise of the Type 094 subs, a report by submarine experts Eric Genevelle and Richard W. Stirn said they were likely still too loud to approach US shores undetected.

Zhou Chenming, an academic at the Yuan Wang military science and technology institute in Beijing, said the latest developments were not linked to rising tensions with the US.

He told the South China Morning Post: "Building to commissioning a submarine can take up to eight years, while electronic and many sophisticated components would have advanced by several generations within this period.

"The Chinese navy would request shipbuilders to install the most advanced facilities into the next hull, while sub engineers need to think about how to put those components in the right places. All this may require changes to hull design involving dimension, sail, rudder, number of limber holes and other factors."

It comes after China threatened to ‘strike any time’ on US troops in Taiwan amid fears the attack would spark a global war, according to reports.

Mr Jinping has pledged "reunification" with the area while Beijing responded to revelations US forces are training troops in Taiwan.

China and Taiwan are at loggerheads because it is feared the Communist giant may try to reclaim the island, prompting fears World War Three could break out.

Taiwan insists it is an independent nation after splitting from mainland China in 1949.

One of China's top newspapers The Global Times has issued a chilling warning to the US.

It claimed US special forces operating in Taiwan were tantamount to an "invasion" of mainland China.

And it warned "once a war breaks out in the Taiwan Straits, those US military personnel will be the first to be eliminated".

"The mainland has the right to carry out military strikes against them at any time," said the vicious editorial published on Friday.

It said the US faces "unbearable" losses if it decides to defend Taiwan and taunted Washington over its failures in Afghanistan.