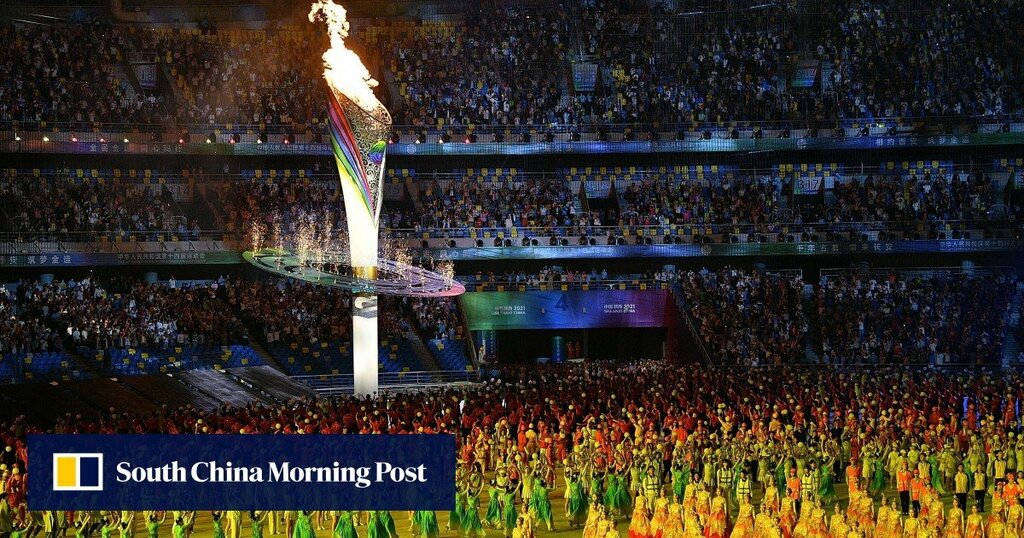 President Xi Jinping officially opened the National Games of China in the northwestern city of Xian, in a key test of the country’s Covid-19 defences in the countdown to next year’s Winter Olympics in Beijing.

A colourful opening ceremony on Wednesday, replete with performances highlighting the ancient host city in front of a packed stadium of masked spectators, emphasised Beijing’s aims for national rejuvenation and to become a major sporting power by 2050.

One of the first major sporting events to welcome spectators in the Covid-19 era, its tightly choreographed and patriotism-themed opening played up the country’s growing strength, including innovations in realms such as space and artificial intelligence as well as successes in containing Covid-19 – along with a nod to its revolutionary past in Shaanxi province, of which Xian is the capital.

The 100-minute ceremony – concluding with the slogan “struggle for the new era, bravely advance the new journey” – sought to present an image of a confident and united China, including its various ethnic minority groups, and drew from references to Xian’s former glory as the capital of China during the Tang dynasty (618-907AD).

Liu Guozhong, the Communist Party secretary for Shaanxi, said at the ceremony that the games would help boost national fitness and achieve the Chinese dream outlined by Xi. He said Xi’s attendance was a “tremendous inspiration” for athletes and the people of Shaanxi, also the birthplace of Xi’s father.

This year’s games are viewed as significant as a test run of Covid-19 measures before the Winter Olympics in Beijing next February. Tens of thousands of fully vaccinated and tested fans are expected to attend, as well as 20,000 athletes and officials from across the country. In the months before the games, authorities imposed tight travel restrictions for Shaanxi to reduce coronavirus risks, including mandatory quarantine and testing for domestic and international arrivals.

Held every four years, the games feature almost all the same sporting events as the Summer Olympics. The are expected to continue until September 27.

A sports fan surnamed Sun from the neighbouring city of Weinan said she had travelled to Xian with her family because the National Games were “a big thing for the entire Shaanxi province”.

“I feel proud that we can hold an event of such a scale during the pandemic,” she said. “The strict coronavirus measures are quite troublesome, but they do make me feel at ease.”

Hong Kong’s leader Carrie Lam Cheng Yuet-ngor and Macau’s leader Ho Iat-seng are expected to attend the closing ceremony for the event, with Hong Kong, Macau and neighbouring Guangdong province having been chosen to jointly host the next games in 2025.

Officials from Hong Kong are set to hold preliminary exchanges with the General Administration of Sport of China (GAS), the national agency overseeing the event, and will start planning talks with the two co-hosts around the time of the handover ceremony, at the close of this year’s games.

Yeung Tak-keung, the city’s sports commissioner, told a radio show on Wednesday that the next National Games would be “an important task for Hong Kong”.

“It is our first time that we have undertaken such a large-scale project, so we need to look back at the experiences of other countries and see what type of [sports within the games] are suitable for Hong Kong,” he said.

A Guangdong sports official told the South China Morning Post that the three governments would form a joint organising committee, but indicated that Guangdong was likely to take a leading role.

Hong Kong’s delegation to the games this year is led by Olympic gold medal-winning fencer Edgar Cheung Ka-long, who will compete in the northern city of Tianjin, where the fencing is based.

The city’s delegation is a mere 169-strong this year, compared with 254 at the last games in Tianjin, as the 21-day mandatory quarantine for athletes travelling from Hong Kong has proved an obstacle. Some sports, such as the city’s Olympic swimming stars and medal-winning table tennis team, have also not gone, because of the impact that attending would have on their availability for other events in the calendar.

The Hong Kong team was introduced with a reference to its “shared patriotic sentiment” with the rest of the country. The Hong Kong and Macau flag-bearers carried the flags of their special administrative regions, while the other provinces and regions held specially designed flags.

Several competitions in the games have already taken place. Tokyo Olympics darling Quan Hongchan was the star in the diving once more as the 14-year-old won gold in the women’s team event and in the 10m platform.

Hong Kong’s Sarah Lee Wai-sze has already finished her track cycling campaign at the games and will return from Luoyang with another gold and a bronze. The 34-year-old, competing in her fourth edition of the games since 2009, just missed out on another bronze.

Under Xi, Beijing has ramped up policies under its blueprint to turn China into a global sporting power, including a national fitness campaign and building sporting venues and facilities.

Ma Yang, an expert in sports governance at Shanghai University, said the games served as a major indicator for GAS of where resources were being allocated, with the budgets of provinces’ sporting bureaus set by provincial governments.

“The only resource the GAS can rely on is the National Games, because what each province cares about most is the number of medals – specifically gold medals – that it earns at the games,” Ma said. “The funds allocated by provinces to sports bureaus each year are measured by performance at the National Games.”

Marcus Chu, an associate professor at Lingnan University in Hong Kong whose research focuses on Chinese politics and sport, said that alongside the Olympics, the National Games was the most valued competition for Chinese athletes.

A budget of 20.2 billion yuan (US$3.1 billion) was allocated to build or improve 50-plus sporting venues, and three new subway lines were built in host city Xian.

“If you get a gold medal at the National Games, the place you are representing will reward you, just like for the Olympic Games,” Chu said. “But for the general public, for mass sports, we will have to see whether the sports venues that were built for the National Games can be used to spark sporting interest from the locals there.”

Li Bo, a local man who was streaming the opening ceremony on his phone, said that the country still had “much to improve” to become a sports power.

“To have strong professional athletes is not enough to call our country a sports power,” he said. “Only when the whole nation, especially our children and the younger generation, are strong and fit can we call ourselves that.”