By Sui-Lee Wee and Tiffany May

The offer was presented as a favor to Hong Kong, a city struggling with a surge in coronavirus infections: a team of 60 medical officials from mainland China who would help expand testing across the city.

But it is being viewed with skepticism by some residents, who worry about the growing reach of the Chinese Communist Party and the testing project’s potential implications for their privacy.

Hong Kong could use the help. The largest wave of coronavirus infections to hit the semiautonomous city has overwhelmed its isolation wards and testing facilities in recent weeks.

To reopen schools and lift restrictions on public gatherings and businesses, the local government needs an effective system of coronavirus testing that can help contain the outbreak. The problem is, the city is short of workers who can conduct testing, and the government’s labs are already running at maximum capacity.

By mid-July, labs were operating around the clock, processing 10,000 tests a day, a rate that is unsustainable, according to Carrie Lam, Hong Kong’s top leader. The government has had to limit access to testing in recent days, saying that it would allocate tests only to people with symptoms, or who had been in close contact with confirmed cases.

The ability to provide testing for all who need or want it is a challenge for many cities and countries. That is where China comes in.

“If you want to have a quantum jump in terms of the number of tests done per day, then we definitely need some help from other countries, or the mainland government,” said Leo Poon, head of the division of public health laboratory sciences at the University of Hong Kong.

When it comes to conducting widespread testing, China is in a league of its own. The Chinese government takes pride in its ability to marshal the resources needed for mass testing, citing it as an advantage of the Communist Party’s system of centralized control.

When officials in the central Chinese city of Wuhan, where the virus emerged, were confronted with a new outbreak in May, they tested 11 million people in roughly two weeks. In Beijing, the government mobilized close to 100,000 community workers in June to test roughly 2.3 million residents in about a week, as it tried to stamp out a new outbreak of its own.

In June, Guo Yanhong, a senior official with China’s National Health Commission, said that China had been able to triple its nationwide testing capacity to 3.8 million tests a day from three months earlier, according to a government statement. Based on this rate, testing 7.5 million, the entire population of Hong Kong, “should not be a problem,” the local pro-Beijing newspaper Wen Wei Po reported.

Beijing dispatched seven medical experts to Hong Kong on Sunday to help with testing, Chinese state media reported. Yu Dewen, a health official from the southern province of Guangdong who is in charge of the team, said that even with the help of third-party laboratories, Hong Kong could process only 20,000 to 30,000 tests a day, according to Southern Metropolis Daily, a state-run Chinese newspaper. He said the team’s goal was roughly 200,000 samples a day.

The seven experts were laying the groundwork for a larger team of technicians who would cross the border and work with three laboratories to ramp up testing. The labs are Hong Kong subsidiaries of mainland companies: Sunrise Diagnostic Center, established by the Chinese genomics giant BGI; Kingmed Diagnostics; and Hong Kong Molecular Pathology Diagnostic Center, according to The South China Morning Post.

BGI is one of the biggest companies conducting coronavirus testing in China. In just three days, it built an “air capsule” testing lab in Beijing that was capable of running 100,000 tests a day.

Its unit, Sunrise Diagnostic Center, could help build similar makeshift testing facilities in Hong Kong if needed, according to The Post. The firm would be able to process up to 30,000 tests a day by the end of this week. That capacity could be increased by five times — to 150,000 a day — by pooling five samples in one tube.

But many Hong Kong health experts are skeptical of universal testing, seeing it as a waste of resources and hard to achieve in a short time.

Instead, they say the government needs to test more people who are deemed to be at greater risk of infection, such as nursing home residents and public transportation workers.

Arisina Ma, president of the Public Doctors Association, a large union representing physicians in public hospitals and the Department of Health, said doctors were surprised by the government’s decision to invite Chinese experts.

Ma said the process was “very problematic” because of its lack of transparency. She noted that a top health official who heads the communicable diseases branch in the city’s health protection bureau had been unable to provide any information about what the Chinese team was doing in the city.

“It felt like a higher-level political decision,” Ma said.

Hong Kong’s medical facilities have the capacity to increase testing but have not been told by the government to do so, Ma said. She wondered if Beijing’s help was even necessary.

“We are not so devastated that we need to ask for help,” she said. “Even when hospitals in America and the United Kingdom are devastated, they just try to mobilize their own personnel. In Hong Kong, we have sufficient and adequate personnel to do it.”

Some establishment-backed critics have argued that it is doctors who have made it difficult or prohibitively expensive for people to get tested.

Regina Ip, a pro-Beijing lawmaker in Hong Kong, said the city had not been able to do nearly enough testing because of what she described as the medical profession’s grip over the process.

“I think it is protectionism — ‘you have to do it our way,’” she said of the Hong Kong health care sector.

The cost of taking a coronavirus test is also exacerbating the problem. At most private hospitals, tests may be done only after a consultation with a doctor. That means one test can cost about $200 — a price tag that adds up for families.

But for some residents, the prospect of more readily available tests was overshadowed by concern that the outreach by Beijing was only the Communist Party’s latest intrusion into their lives.

They found it especially unnerving in the wake of the sweeping national security law that Beijing imposed June 30 to quash dissent in Hong Kong. Police officers investigating alleged subversion crimes under the new law have been collecting DNA samples from people arrested at protests.

The Hong Kong government has not said who it plans to test, but it has pledged that DNA samples will not be transported to the mainland.

But the local government’s lack of transparency about the move to invite Chinese experts and the involvement of Chinese testing companies have raised alarm bells, activists say. Compounding such fears, the Hong Kong government said it was looking into the potential criminality of “spreading rumors” that the testing program could lead to the harvesting of DNA samples.

The chairman of Sunrise Diagnostic Center, Hu Dingxu, has said that samples would not be sent to the mainland, according to Wen Wei Po, the pro-Beijing newspaper.

Danny Yeung, the chief executive and co-founder of Prenetics, a firm that has been working with the Hong Kong government to process coronavirus samples, said his company had no access to the private information of anyone being tested because they were identified only by a bar code. Samples would be sent to a biohazard waste company for disposal after seven days, he said in an interview Wednesday.

The activists’ concerns stem from the fact that the cells collected in the nasal and throat swabs used for coronavirus testing can also be used to generate DNA profiles.

Many worry that their data could live on beyond the pandemic, especially if the samples are stored in a DNA database, similar to the kinds that the Chinese government has set up for collecting DNA samples from Uighurs in the far western region of Xinjiang and from men and boys all across China.

“People in Hong Kong fear they will be subject to similar methods of control like in Xinjiang,” said Maya Wang, a senior China researcher at Human Rights Watch who has studied biometric surveillance in China. “A large part of that is the mass collection of biometrics.” 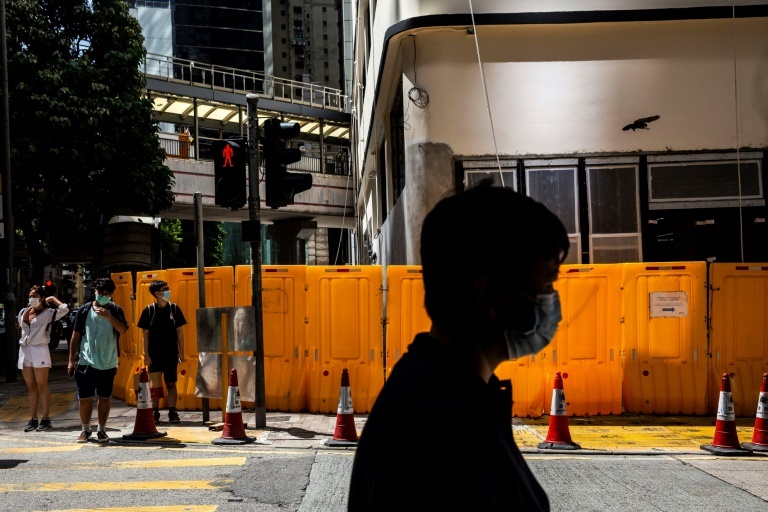