Even the fish in the sea are getting caught up in China’s attempts to stop the spread of Covid-19.

Authorities in the coastal city of Xiamen, in southeastern Fujian province, are testing not only fishers for the virus on a daily basis but also their catch. The practice has stirred debate and invited ridicule on social media, and comes amid a worsening outbreak on the island of Hainan further to the south, which the government has said may have originated at a fishmonger’s shop.

Xiamen’s district of Jimei announced the testing in late July because of fears that illegal trading with foreign fishers could import the virus. The regime involves testing both people and the things they’ve been in contact with, including fish plucked from the water. What caught the eye of netizens in particular were pictures of fish getting oral swabs, which some chose to interpret as a symbol of China’s overzealous application of its Covid Zero policies.

“Fishers must carry out one Covid test every day during operations,” the official notice read. “When fishers and their catch land on shore, both ‘humans & goods’ should be tested.”

Wags on the internet have been busy poking fun, suggesting that the tests could be expanded to mosquitoes, perhaps the worst spreader of disease among humans, or using the data to restrict the movements of fish in the ocean.

The government in Jimei couldn’t be reached for comment. But jokes aside, the regulations in Xiamen and other coastal areas highlight how China and other countries continue to differ over two years into the epidemic on the threat posed by food when it comes to transmitting Covid.

Researchers in China have found that the virus can persist in conditions found in frozen food and packaging as well as cold-chain products, which are kept refrigerated. They have also linked some infections in people to imported goods, although the degree of surface contact or amount of virus required is unknown. China’s government has embraced this theory, and some supermarkets even have separate coolers for imported goods.

However, the US Food and Drug Administration and the US Centers for Disease Control and Prevention said in 2021 that there is no credible evidence of food or food packaging associated with, or as a likely source, of transmission.

Where Are We in Hunting for the Coronavirus’s Origin?: QuickTake

Goldman Sachs and Nomura have downgraded their forecasts for China’s economic growth to 3% and 2.8% respectively, as a power supply crunch adds more uncertainty to the outlook. The estimates trail both the government’s target of 5.5%, and a Bloomberg survey that projects growth of 3.8%.

The energy crisis is getting worse, piling pressure on commodities industries that provide the building blocks of the global economy.

Industrial China is alive and well despite concerns of an economic slowdown. It just doesn’t look like it did before. 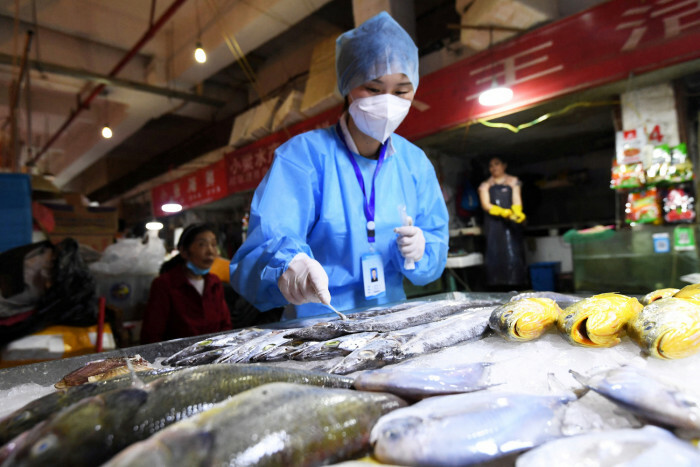 China testing live fish for Covid
Even the fish in the sea are getting caught up in China’s attempts to stop the spread of Covid-19.

Bangkok Post
From analysis to the latest developments in health, read the most diverse news in one place.
City in China orders fish swabbed for Covid

Coastal city of Xiamen tells workers on fishing boats, as well as their catch, to undergo testing as part of…

Benzinga
Fertiliser usage is being pummeled by Europe's energy crisis

The Independent UK
One place to find news on any topic, from hundreds of sites.
Centre hikes windfall profit tax on export of diesel, ATF; cuts tax on domestic crude oil

At the third fortnightly review, the government raised the windfall profit tax on the export of diesel to ₹7 per…