Beijing, China – When Annie Shu flew to “China’s Hawaii” of Hainan in July, she was hoping to enjoy a much-needed break after suffering through a two-month lockdown at home in Shanghai.

Instead, Shu, a digital marketing specialist in her early 30s, has found herself enduring another lockdown as the island province battles its largest outbreak of COVID-19.

Shu, originally from Hong Kong, has been confined to her hotel room in the popular resort city of Sanya since August 2, forbidden from so much as stepping outside for air.

Shu has no idea when she may be able to leave her hotel or return home.

While the Shanghai resident is scheduled to fly to the mainland on Saturday, after her original flight was pushed back three days, she is doubtful she will be able to travel as her airline awaits guidance on when it can resume operations.

“Flying out of Hainan is one thing,” Shu, who asked to use a pseudonym, told Al Jazeera. “Getting into Shanghai is another problem because we don’t know yet where we will quarantine in the city, or if the city will even allow us to come in.”

Some 178,000 vacationers, including about 57,000 in Sanya, have been stranded on the popular resort island, according to Chinese state media.

More than 2.9 million residents in the provincial capital of Haikou and nearby cities and towns have been locked down as authorities scramble to contain the spread of more than 2,000 cases reported since the start of the month.

On Wednesday, China’s National Health Commission said the outbreak in Sanya remained “at a high level”, and that more than 10,000 medical personnel from 19 provinces had been deployed in Hainan to assist with mass testing.

The commission added that two national emergency and rescue teams have taken charge of makeshift hospitals to carry out treatment.

Hainan provincial authorities have stipulated that travellers attached to groups or hotels, or those coming from districts, counties, or cities without cases, can only leave the island after two negative polymerase chain reaction (PCR) tests within 48 hours. They should also be clear of symptoms in the past three days. For now, only Chinese nationals can upload their test results on an app to get clearance.

China has stuck to an ultra-strict “zero COVID” policy aimed at stamping out outbreaks at all costs, even as the rest of the world learns to live with the coronavirus.

Although Beijing has credited the policy with saving lives, the strategy has come at the cost of on-and-off restrictions on people’s movements and economic activity that have no end in sight after almost three years.

Josie Chen, the operator of a Shanghai-based travel agency, said Beijing’s zero-tolerance stance has made it difficult for local tourism to survive and believes the measures are “getting out of control”.

While many tour groups only managed to survive the pandemic with the help of domestic tourism, the risk of being caught up in sudden lockdowns and quarantine has made many Chinese hesitant to travel within the country, Chen said.

“Nobody can challenge the ‘zero COVID’ policy – not even big industries,” Chen told Al Jazeera.

Chen fears that an exodus of expatriates during the Chinese winter holiday will make the situation even worse for the industry.

“The trend is getting worse,” she said. “Locals cannot afford to travel anymore because many small tour agencies have already shut down.”

Chen said the best travel agencies can do is give travellers more destination options and be open to compromise when clients are caught up in sudden restrictions and closures.

Despite Beijing’s tough strategy, authorities are increasingly playing whack-a-mole since the emergence of ultra-infectious Omicron subvariants such as BA.5.

Elsewhere on the mainland, the National Health Commission has warned of a “high risk of spread” in Tibet, where there have been 28 confirmed cases. In the capital Lhasa, authorities have set up a 2,000-bed makeshift hospital with the capacity to test 300,000 people a day. Officials have also temporarily closed tourist sites, including the famous Potala Palace, and suspended large events while mass testing gets underway.

In Xinjiang, authorities on Tuesday reported 122 new infections, bringing the total number of active cases to 536. Authorities in the capital Urumqi on Wednesday announced a five-day period of “static management” involving business closures, the suspension of public transportation and the closing off of residential communities.

In Beijing, officials announced this week that incoming travellers would be barred from entering the capital if arriving from cities, counties, or districts that have recorded any COVID-19 cases within the last 14 days. Authorities later reduced the period to 7 days.

Not surprisingly, domestic tourism has sagged under the weight of the government’s strict controls.

Last month, the Chinese Ministry of Culture and Tourism said the number of domestic tourist trips reached 1.45 billion in the first half of 2022, down 22 percent from the 1.87 billion trips during the same period a year earlier.

“What we do now is just to pray for good luck,” Chen said. “We have sacrificed a lot on the economic side of the situation.”

In a WeChat group created to handle the isolation of the Hainan lockdown, Shu and other Shanghai-based travellers share similar expressions of hope for an end to their ordeal along with the latest developments in the districts where they are stranded.

One group member recently managed to join a charter flight to the mainland but will have to shell out about RMB 5,000 ($743) for 14 days of hotel quarantine after getting off the plane.

Many are frustrated with what they describe as chaotic plans to move tourists from hotels to pre-flight quarantine facilities, which have varied depending on the traveller’s hotel and points of origin and departure.

“I do not have a solid hope that the ‘seven-day quarantine’ authorities have told us about will proceed, given my experience in Shanghai,” Shu said.

“We all know that what is happening now is not sustainable. After what happened in Shanghai, a lot of foreigners and investors left the country. Most of my friends have also left.”

While Shu waits for her flight back to Shanghai, she has stopped asking the authorities questions. After getting caught up in two lockdowns in a matter of months, she feels depressed and has given up hope of receiving clear answers.

“My strategy now is to follow what the authorities say because there’s nothing much I can do anyway,” she said.

“What I can do is to control my emotions and attitude. But until when can I do that? I don’t know. But eventually, I will reach my breaking point. Hopefully, they will abolish the ‘zero COVID’ policy before that happens.” 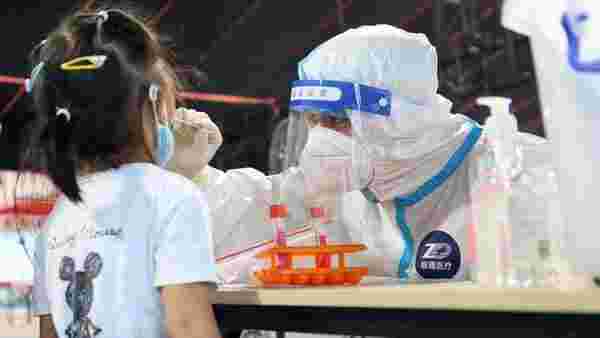 China's Covid cases hit three month high on beach town surge
Covid-19 cases in China jumped to a three-month high, with almost half of the 1,993 infections reported nationally for Wednesday…

Livemint
From analysis to the latest developments in health, read the most diverse news in one place.
China tourism hit as Covid cases rise in popular locales

HONG KONG: Some of the most popular travel destinations among Chinese tourists are seeing a resurgence in coronavirus cases, sapping…

Bangkok Post
One place to find news on any topic, from hundreds of sites.
Shanghai to reopen all schools Sept. 1 as lockdown fears persist

China's financial hub Shanghai said on Sunday it would reopen all schools including kindergartens, primary and middle schools on Sept.…