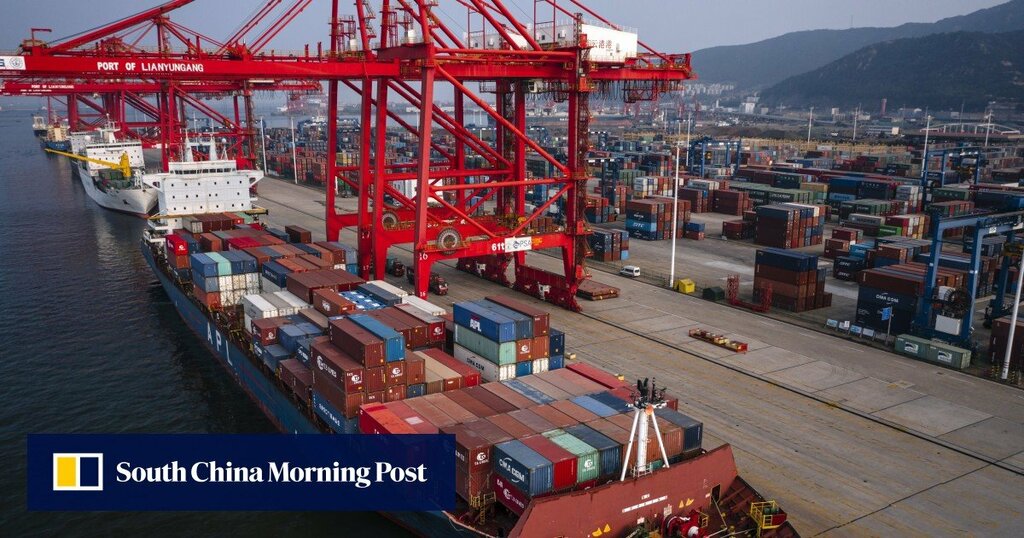 Strong Chinese export growth will likely slow towards the end of the year as more overseas manufacturing bases open up and demand for goods like personal protective equipment (PPE) slows, Chinese manufacturers say.

Chinese trade data released on Wednesday showed that exports grew by 28.1 per cent in September from the same period a year ago to US$305.74 billion, up from the 25.6 per cent growth seen in August and far above market estimates for a 21.5 per cent rise.

During an online cotton forum on Tuesday, Zhang Xi’an, vice-chairman of the China Chamber of Commerce for the Import and Export of Textiles, flagged concerns about the outlook for his industry, saying that exports would decline 13 per cent for the full year while apparel exports could still have a 15 per cent rise.

He also warned that many manufacturing countries, such as Vietnam, had now recovered from Covid-19 Delta variant outbreaks and were restarting production. This would increase competition for Chinese exports and coincide with a fall-off in demand for exports of PPE.

“The situation for China trade is complicated and severe, the growth rate of textile and apparel exports in the second half will be significantly lower than that of the first half,” he said in a videotaped speech.

“Next year and beyond, as the pandemic is brought under control, we should carefully assess the impact of a reopening of the world economy on Chinese industry, and how it copes with new and greater challenges.”

Unlike other sectors, textiles is also facing another hurdle in the shape of US and European sanctions on Xinjiang cotton, he said, noting that US-China relations remain strained.

Zhang’s anxiety reflects a growing concern among industry watchers that worse is to come for exports from the world’s second largest economy, despite a robust trend over the first nine months of the year that saw exports climb 23.86 per cent to US$882.72 billion year-on-year.

Export resilience has added to growing evidence that power shortages did not have a huge impact on China’s manufacturing sector last month, said Julian Evans-Pritchard, senior China economist at Capital Economics, in a note on Wednesday.

China’s electricity consumption, a key barometer of economic activity, rose 6.8 per cent year on year in September, faster than 0.6 per cent growth in August, according to data released by the National Energy Administration on Wednesday.

“The hit from power rationing has largely been confined to a few energy-intensive industries and did not hold back wider manufacturing activity as many had feared,” wrote Evans-Pritchard.

But he warned that there was still a risk that the power rationing could derail the Chinese export sector in the coming weeks.

Lu Ting, Nomura’s chief China economist, said that wide power rationing only emerged in mid-September, meaning it had probably not had an observable impact on exports yet.

“We will very likely see a significant drop in export growth in the fourth quarter, especially in November and December,” Lu said in a note on Wednesday, citing a higher base last year, an unwinding of front-loading and a likely fall-off in consumer durables demand.

Aside from strong exports, healthy Chinese imports also stood out in September. This was down mainly to a rise in coal imports as China raced to replenish a shortage of the power-generating raw material that has partly contributed to the power crisis.

China’s imports rose by 17.6 per cent in September from a year earlier to US$238.98 billion. This was down from 33.1 per cent growth in August and below market forecasts for growth of 20.9 per cent.

This was still a healthy pace of growth though, supported by coal demand, said Erin Xin, Greater China economist at HSBC, in a note on Wednesday.

Coal imports in September, in volume terms, rose by 76.1 per cent from a year ago, a faster pace than last month‘s 35.8 per cent, according to the customs data.

Xin said that strong exports showed “a continued recovery in global demand and likely reflected front-loading of shipments ahead of the holidays” and would act as a cushion in the rest of the year amid growing headwinds stemming from a slowing property sector, power shortages, and the risk of Covid-19 cases weighing on consumption.

“However, more support is still needed for SMEs to recover as they form the backbone of China‘s labour market,” she said, referring to small-to-medium enterprises.

The rise in coal imports was partly offset by a drop in the value of iron ore imports, driven by a fall in iron ore prices, analysts said. Iron ore prices have fallen to around US$120 a tonne after peaking at about US$233 a tonne at the start of the year.

Zhang Xi’an, vice-chairman of China Chamber of Commerce for Import and Export of Textiles, showed decided worries about the industry’s export numbers in the future at a forum on Tuesday.