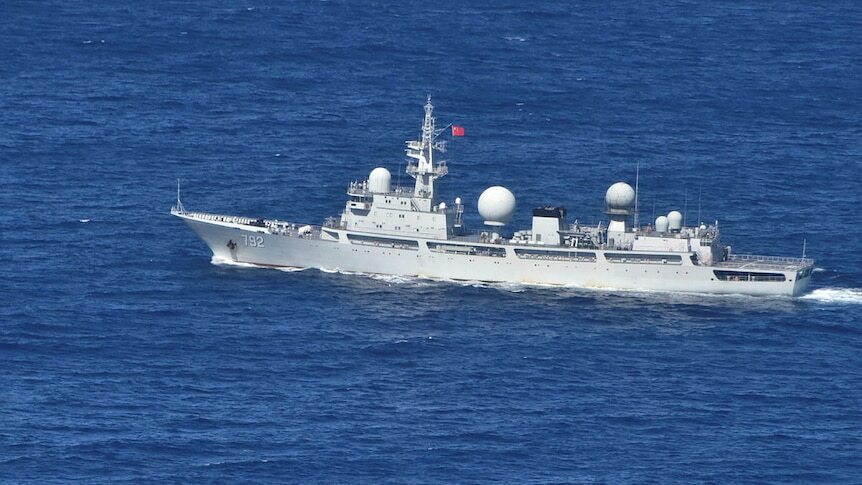 Defence Minister Peter Dutton has revealed a Chinese warship with intelligence gathering capabilities is being tracked off the WA coast,…

A Chinese Foreign Ministry spokesperson has responded to Defence Minister Peter Dutton stating a Chinese surveillance  ship has been travelling along the WA coast on an intelligence-gathering mission, saying Beijing "always abides by international law".

Peter Dutton said the ship had been tracked along the coastline for the past week and was sighted on Friday morning heading north, about 250 nautical miles from Broome in Western Australia.

Asked about the ship, Chinese Foreign Ministry spokesperson Zhao Lijian said he had no information about the specific situation, but "China always abides by international law and international practice".

"The relevant Australian politician should see the relevant situation objectively and calmly, and not make sensational remarks," Mr Zhao told reporters at a daily briefing.

Mr Dutton had said the vessel's mission was "to collect intelligence right along the coastline".

"It has been in close proximity to military and intelligence installations on the west coast of Australia," he said, adding that the Australian Defence Force had been tracking the spy ship in the past "week or so".

Prime Minister Scott Morrison did not go as far as the Defence Minister, saying no international laws were breached.

"Of course freedom of navigation is permitted all around the world," Mr Morrison said on Saturday.

"But what yesterday highlighted, particularly when you take it in the context of economic coercion, foreign interference, pushing into our region, and an assertive Chinese government seeking to impose its will across the region, this highlights the challenges that we face."

Mr Dutton, who described the situation as unprecedented, said he was concerned not just about how far south the ship had travelled but also that it had "hugged" the coastline as it headed back north towards Darwin.

He dubbed the matter "very strange" and said he expected the ship was collecting as much intelligence as it could.

Opposition Leader Anthony Albanese said Labor shared concerns about the presence of the intelligence ship off the Western Australian coast, and was seeking a proper security briefing on the matter.

Mr Albanese pointed out that Mr Morrison had not adopted Mr Dutton's language.

Defence Minister Peter Dutton has revealed a Chinese warship with intelligence gathering capabilities is being tracked off the WA coast,…