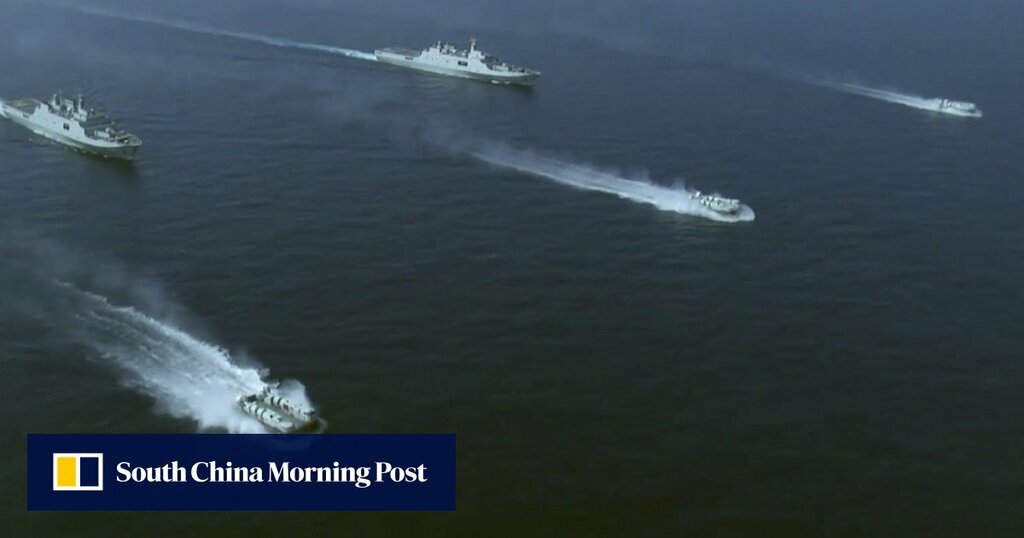 The Chinese military is ramping up its presence in the South China Sea and enhancing its ability to seize an island, despite military friction with the United States in the region.

An area in the west of the Leizhou Peninsula will be cordoned off to traffic on Thursday and Friday, because of “live-fire exercises”, according to a notice by China’s Maritime Administration.

Separately, Chinese state media reported on Wednesday that a naval detachment under the Southern Theatre Command had conducted an amphibious landing exercise in the South China Sea in the early hours of the morning.

The exercise involved using Wuzhishan – a Type 071 amphibious transport dock – and two helicopters, at least one tank and three air-cushioned landing craft, according to video footage released by the state broadcaster CCTV.

The video also showed soldiers being sent to an unspecified island by both the helicopter and the transport dock.

“In recent years, this [naval] detachment has organised targeted exercises in conjunction with major exercises, and has accelerated the deep integration of the amphibious landing vessels with other combat forces,” said the video.

The exercises reflected the increasing posturing by the Chinese navy, which has organised a series of drills this year aimed at enhancing its ability to take over an island.

Song Zhongping, a Hong Kong-based military commentator and a former PLA instructor, said the amphibious island-seizure exercise had a strong and clear signal – to regain the island they once lost.

“China has been emphasising such exercises in recent years. The island seizure ability shown in the video reflected that the PLA has already conducted enough exercises to gain superiority in the air and at sea, and this marine combat ability will certainly be used to regain control of some islands,” Song said.

According to data ﻿compiled by the South China Morning Post, China has conducted 20 naval exercises involving elements of island capture in the first half of the year alone, far exceeding 13 such exercises carried out during 2020.

The recent exercise came after the guided-missile destroyer USS Benfold sailed near a disputed South China Sea reef, the Mischief Reef, which China claims as its own but is also claimed by the Philippines and Vietnam.

An international tribunal ruled in 2016 that most of China’s claims in the waters had no legal basis.

The Benfold incident started a new round of accusations between China and the US after Beijing introduced a regulation in late August requiring notice by foreign vessels entering its claimed territorial waters.

The disputed waters have been a flashpoint in the strained US-China tensions. China continues to claim nearly all the waters after vowing to ignore the tribunal verdict, while the US has shown a growing willingness to challenge Beijing’s actions there and has conducted regular freedom-of-navigation operations.

In further evidence of friction between the superpowers, China kicked off a series of naval exercises in late August, immediately before a high-profile joint drill between the US and other members of the strategic Quad alliance off the coast of Guam.