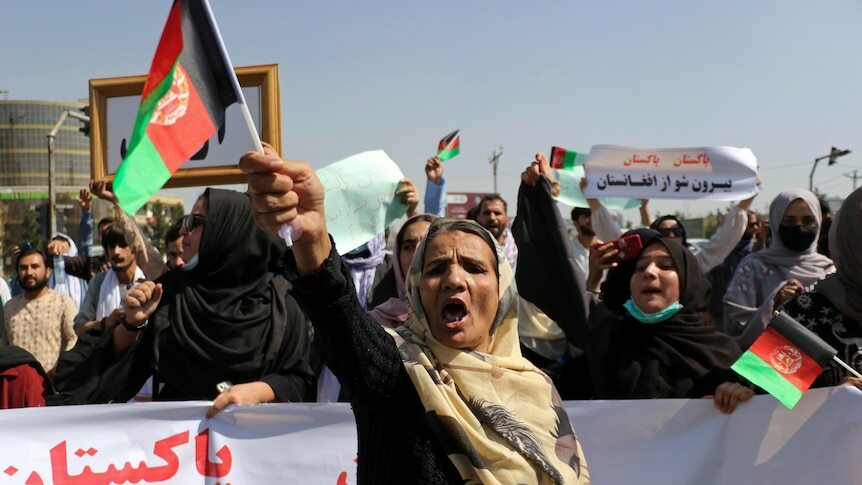 They should help Afghanistan's positive development while respecting its sovereignty and independence, he said in a statement issued by the Chinese foreign ministry.

Mr Wang, who is also China's State Councillor, made the comments via video to a meeting of diplomats from Afghanistan's neighbours, according to the statement.

China shares a land border with Afghanistan, where the Taliban on Tuesday named a new government.

The Islamist militant group retook control of Afghanistan last month as US-led foreign forces were ending a 20-year presence in the country.

Mr Wang said China would provide 200 million yuan ($42 million) worth of grain, winter supplies, vaccines and medicine to Afghanistan, adding it had already decided to donate an initial batch of 3 million COVID-19 vaccine doses to the Afghan people.

He called on the Taliban to cut ties with all extreme terrorist forces and take measures to crack down on them.

"All parties should strengthen intelligence sharing and border control cooperation to catch and eliminate terrorist groups that have sneaked in from Afghanistan," in order to ensure regional security and stability, Mr Wang said.

The United Nations women's agency in Afghanistan, meanwhile, says it is receiving reports of significant "rollbacks on women's rights" in the country every day.

According to the deputy Afghan representative for UN Women, Alison Davidian, the complaints range from women barred from going to work — or even leaving their homes — without a male guardian to attacks on centres that have been helping women who flee violence as well as attacks on girls' and co-educational schools.

"The lack of clarity of the Taliban's position on women's rights has generated incredible fear — and this fear is palpable across the country," Ms Davidian said.

In a video, she said UN Women was receiving reports of violations through its extensive network of women, civil society organisations, women leaders and human rights defenders.

The agency's Afghan operation hopes to reopen its offices in five provinces once the security situation improves, because "Afghan women have never needed us more", she said.

Ms Davidian said the situation for women differed from province to province and she urged the Taliban "to show that it governs for all Afghans and that it has changed" and that it would protect and promote "the full spectrum of women's rights".

Meanwhile, US Secretary of State Antony Blinken has pressed the Taliban to allow charter flights carrying would-be evacuees to leave the city of Mazar-e-Sharif, in Afghanistan's north-east.

Mr Blinken said that the Taliban had not permitted the flights' departure because, they claimed, some of the passengers did not have the required documentation.

"While there are limits to what we can do without personnel on the ground, without an airport with normal security and procedures in place, we are working to do everything in our power to support those flights and to get them off the ground," Mr Blinken said.

He said the US would continue to press the Taliban.

Former Afghan president Ashraf Ghani — who fled Kabul as Taliban forces reached the outskirts of the city last month — has apologised for the abrupt fall of his government but denied that he had taken millions of dollars with him.

In a statement posted on Twitter, Mr Ghani said he had left at the urging of his security team, who said that, if he stayed, there was a risk of "the same horrific street-to-street fighting the city had suffered during the civil war of the 1990s".

"Leaving Kabul was the most difficult decision of my life, but I believed it was the only way to keep the guns silent and save Kabul and her six million citizens," Mr Ghani said.

Mr Ghani — a former World Bank official who became president after two bitterly disputed elections marred by widespread allegations of fraud on both sides — dismissed reports that he had left with millions of dollars in cash as "completely and categorically false".

"Corruption is a plague that has crippled our country for decades and fighting corruption has been a central focus of my efforts as president," he said, adding that he and his Lebanese-born wife were "scrupulous in our personal finances".