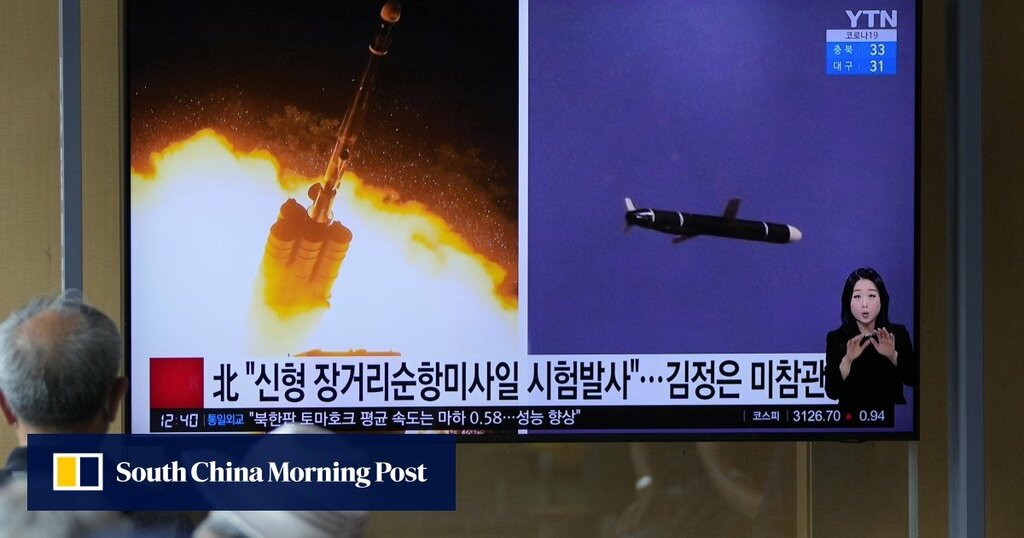 North Korea’s cruise missile tests over the weekend may have caught the world off guard, and prompted “concern” in neighbouring Japan, but indicate only a limited increase in the country’s military strength, according to analysts.

However, Pyongyang’s latest move was certain to disappoint North Korea doves and make the hawks harden their stance, they said, as China called for restraint in the region.

That came after the state-run Korean Central News Agency reported that North Korea had successfully carried out tests of a new long-range cruise missile over the weekend.

The missiles are “a strategic weapon of great significance” and flew 1,500km (930 miles) before hitting their targets and falling into the country’s territorial waters during the tests on Saturday and Sunday, KCNA said. They travelled for 126 minutes along “oval and pattern-8 flight orbits”, it reported on Monday.

The missile tests, which appear to be the country’s first since late March, came days after North Korea celebrated the 73rd anniversary of its founding with a military parade in Pyongyang.

They also came just a day before senior officials from the United States, South Korea and Japan were due to meet in Tokyo to discuss North Korean issues, including denuclearisation. Also, Chinese Foreign Minister Wang Yi is expected to visit Seoul this week for talks with his counterpart Chung Eui-yong, on the final stop of a week-long four-nation regional tour.

China’s foreign ministry on Monday called for restraint in the Korean peninsula, while reiterating Beijing’s long-term stance on a solution via dialogue.

“China calls on related parties to exercise restraint and meet halfway, to actively hold dialogue and [enhance] contact … to push ahead with the process of a political solution to [Korean] peninsula issues,” ministry spokesman Zhao Lijian said.

Cruise missiles are slower than ballistic missiles, and their development is not explicitly banned under UN Security Council resolutions. This means the latest tests are unlikely to draw sanctions that have cut North Korea’s lifeline in the past. Talks on dismantling its nuclear and ballistic missile programmes in return for US sanctions relief have stalled since 2019.

A ballistic missile is powered by a rocket and can carry bigger and more powerful payloads. They also have a longer range, apart from flying faster. North Korea test-fired its first intercontinental ballistic missile, the Hwasong-14, in July 2017.

Hwang Jae-ho, director of the Global Security Cooperation Centre at Hankuk University of Foreign Studies in Seoul, said although cruise missiles were less dangerous than ballistic ones, they could pose a big danger if equipped with a small nuclear warhead.

“If Pyongyang continues to advance its nuclear programme and arm this cruise missile with a deadly nuclear warhead, then neighbouring countries will surely be unnerved,” said Hwang, while adding the low-profile launch reflected the regime taking a cautious approach so as not to provoke other countries.

North Korea’s 73rd National Day military parade last Thursday did not feature the tanks or new missiles that are usually part of such displays.

The long-range cruise missile tested over the weekend was capable of reaching most of Japan.

“Pyongyang is clearly eyeing Japan with this missile,” said Song Zhongping, a former PLA instructor and now a military commentator, but added that, even though this new cruise missile could give Pyongyang a new strike option, a lack of logistical support would hobble its attack abilities.

“North Korea has developed ballistic missiles for years. But, due to a lack of guidance from Terrain Contour Matching and satellites, their attack capabilities would be unstable,” Song said.

Terrain Contour Matching, or TERCOM, is a navigation system that considerably increases the accuracy of cruise missiles.

However, even though the latest tests had not changed the existing security equation on the Korean peninsula or in Northeast Asia, other damage has already been done, according to Grant Newsham, research fellow at the Japan Forum for Strategic Studies in Tokyo.

“If 30 years of experience has taught us anything, it’s that concessions to North Korea only get you more bad behaviour … from the Kims. A solid, unflinching defence and serious pressure are the only approach that will work,” Newsham said.

The US military said the missile tests posed “threats” to North Korea’s country’s neighbours and beyond. “This activity highlights [Pyongyang’s] continuing focus on developing its military programme and the threats that poses to its neighbours and the international community,” the US Indo-Pacific command said in a statement.

Japan’s chief cabinet secretary Katsunobu Kato said his government was “concerned” by the KCNA reports and would continue to work closely with the US and South Korea to monitor the situation.