By Jasper Jolly and agencies 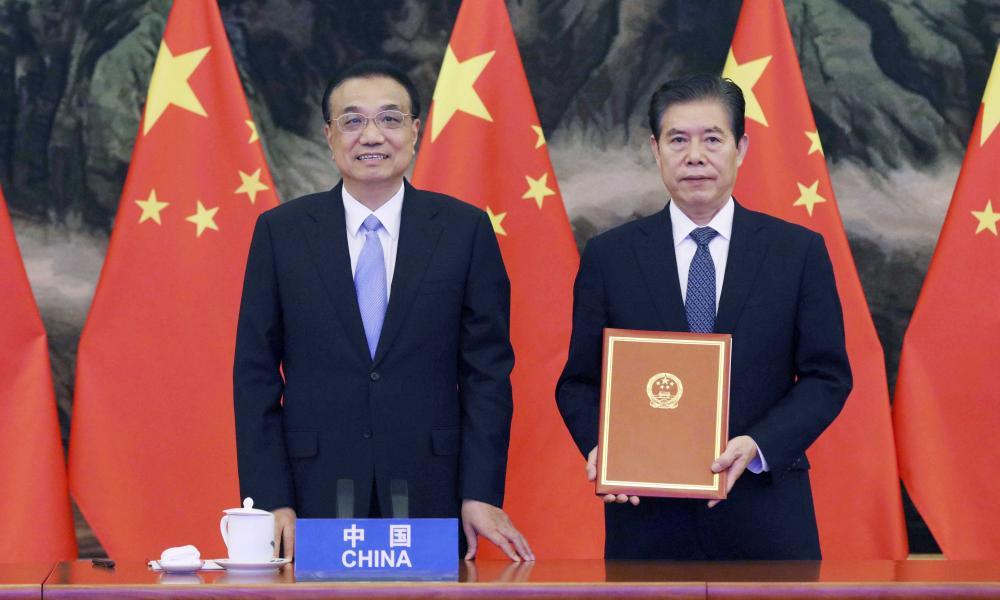 The leaders of China and another 14 countries in the Asia-Pacific region have signed one of the biggest free trade deals in history, covering 2.2 billion people and 30% of the world’s economic output.

The Regional Comprehensive Economic Partnership (RCEP) was signed over a video link on Sunday after eight years of negotiations.

Australia, Japan, New Zealand and South Korea signed the deal, alongside members of the 10-nation Association of Southeast Asian Nations (Asean), including Indonesia, Malaysia, the Philippines and Thailand.

The deal sets the terms of trade in goods and services, cross-border investment and new rules for increasingly important areas such as electronic commerce and intellectual property. The effect on the trade of finished goods between Asian nations will be particularly marked, analysts have said.

In a joint statement, the leaders of the countries said the trade deal would form a crucial part of their plans to recover from the pandemic, which has forced countries around the world to lock down their economies.

It would have covered another 1.4 billion people had India not pulled out of negotiations last year because of concerns it would not be able to protect domestic industry as well as its agricultural sector.

However, the statement from the signatories left the door open for India to join the trading bloc, saying it would be “welcome”.

While not offering the same level of integration as the EU or the US-Mexico-Canada Agreement, the deal has been seen as a significant step towards removing trade barriers, as well as extending the influence of China.

The Chinese premier, Li Keqiang, described the deal as “a victory of multilateralism and free trade”, according to a report on Sunday by the state-run Xinhua news agency.

Trade and investment flows within Asia have vastly expanded over the past decade, a trend that has accelerated amid feuding between the US and China, in which the two superpowers have imposed billions of dollars’ worth of punitive tariffs on each other’s exports.

The RCEP agreement is loose enough to stretch to fit the disparate needs of member countries as diverse as Australia, Myanmar, Singapore and Vietnam.

Unlike the CPTPP – the Comprehensive and Progressive Agreement for Trans-Pacific Partnership – and the EU, it does not establish unified standards on labour and the environment or commit countries to open services and other vulnerable areas of their economies.

The signing of the deal comes shortly after Joe Biden won the US presidential election. Biden is expected to shift US foreign policy to take more of a lead on global issues.

Donald Trump in 2017 pulled out of the Trans-Pacific Partnership, a deal previously envisaged as a way of curbing China’s influence.