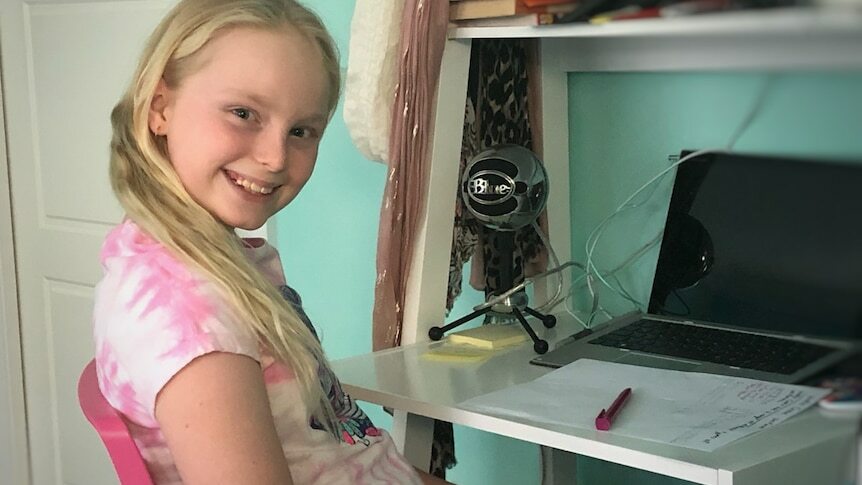 Australia's COVID-19 vaccination rollout is now in its next phase with 12 to 15-year-olds eligible for Pfizer, but younger children say they are worried they are not safe.

Nine-year-old Erin will soon be the only member of her family without a COVID-19 vaccination, with her parents fully vaccinated and her two older brothers becoming eligible this week.

Erin lives in the western Sydney suburb of Glenmore Park, near the epicentre of Sydney's outbreak.

Like the rest of her classmates, she is set to return to face-to-face learning from next month.

She told the ABC that without a vaccine, she was concerned about sitting in the classroom.

"You should have a choice to do learning from home still or go back to school.

"I can't even play with kids in my street or soccer with my team."

The NSW government is pushing ahead with the National Cabinet's agreed plan to ease restrictions and reopen once 70 per cent of eligible residents had two doses.

That milestone will be reached before the vaccine has been approved for younger children.

The latest studies show that most children who have been infected with the Delta variant had mild or no symptoms.

Nine-year-old William was one of many children from around the country who responded to an ABC call out on social media.

He suffers from asthma so his mother Rebecca has made the difficult decision to keep her children at home when schools in the Victorian town of Gisborne reopen.

"We're still vulnerable, so the government is gambling on us not to get COVID," he said.

Rebecca believes children are feeling "voiceless" in the debate about responses to the pandemic.

"They don't understand why they are being forgotten," she said.

According to Article 12 of the United Nations Convention on the Rights of a Child, children have a right for their views to be heard on decisions that affect them.

Anne Hollonds, National Children's Commissioner, said she had concerns the unique needs of children were being overlooked in pandemic planning.

"Children are not in isolation. They're hearing all the things we're hearing as well, which will cause them to feel anxious, unsure and scared.

"Really, no-one has spoken directly with them to communicate how risks are being weighed up."

Ms Hollonds is calling for governments and schools to have clearer messaging about information that directly impacts children and parents.

She said schools should be using their daily online lessons as an avenue for that discussion, to reassure students "that there are steps taken to reduce class sizes, to ensure ventilation is as good as it can be in the classroom, to ensure there's social distancing and hand hygiene".

Like many children, 8-year-old Freddy from Waverton in Sydney's lower north shore is frustrated with remote learning and just wants to see his friends face to face again.

"If my teachers are vaccinated and we still follow COVID-safe rules, then there will be little chance of people catching COVID", he said.

"Only 2 per cent of children end up in hospital, but my school has about 600 students so that could be 12 people," said 9-year-old Hayley who lives in Sydney's Liverpool LGA.

"I hope everyone wears a mask to keep each other safe."

This was a view echoed by multiple children who responded to the ABC.

As Queensland continues to fend off incursions of cases, the prospect of reopening the border to NSW makes 11-year-old Lily, from Ormeau, south of Brisbane, nervous.

The aspiring cellist attends an independent school where "everyone is wearing masks", but she doesn't think authorities "are really considering children".

Seven-year-old Hugo from the Melbourne suburb of Reservoir is desperate to scooter in the big bowl again and go back to class.

However, he thinks "politicians and decision makers should reconsider" easing restrictions before young children are vaccinated.

"If they don't, when the borders open and the kids get COVID then all the grown-ups catch it again … who knows what will happen then," he said.

In Western Australia, schools and community sport are operating as normal.

Nine-year-old Lucas from the outer Perth suburb of Secret Harbour rarely watches the news and his family only occasionally talks about the pandemic.

Even still, he worries about Western Australia opening its border.

"Here in WA we have no COVID, so why open the borders and let COVID in?" Lucas said.

"We shouldn't open up until 95 per cent, including kids, are vaccinated."