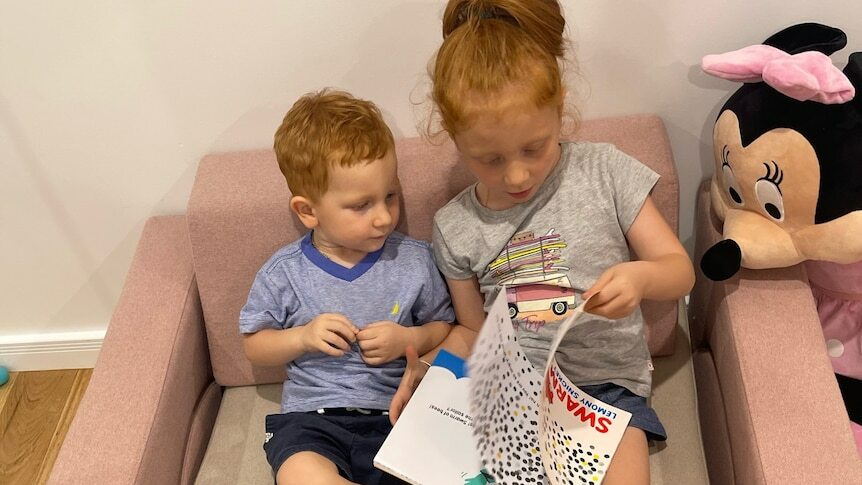 With no concept of social distancing or mask wearing, and too young to get a vaccine, children under five at daycare are being sent home to isolate in record numbers.

Despite the impact this has on families, childcare providers and the economy, a national approach on how to handle outbreaks in childcare has not been established by the federal government, which is responsible for long daycare.

Instead, it depends on state or territory education departments, and even then the rules change day by day.

"In Victoria, about 60 per cent of our centres have dealt with or are dealing with COVID, yet only five of our centres there are closed," said Scott Coulter from Goodstart, Australia’s largest early learning provider.

"And in South Australia for example, where the settings are different with requirements to test and isolate before returning to the workplace, we have between 40-50 per cent of our network closed today."

Judy Radich, who runs Cooloon Children's Centre in Tweed Heads, made the decision to shut on Monday after a positive case over the weekend.

"We made a decision to close on Monday until we could find out from the department what we actually needed to do, what the rules were now," she said.

"Trying to make a decision that is fair on everybody and keeps everybody safe, but at the end of the day my job is also to protect the income of the service, and stay here long term for families now and into the future."

In some families, children have been sent home multiple times and parents are just waiting for the next time they get the call.

Ashleigh Kachel's family is currently isolating for the second time in less than 12 months after her son was deemed a close contact at his Sydney daycare centre.

"Mackenzie (five) is at home because it is school holidays, I am working from home, and here we are with Harrison (two) at home again, trying to fight the battle of managing COVID, being negative and being in isolation," she said.

If Ms Kachel's family lived in a different state, they may not be forced to undergo isolation, which is having a large impact on her work.

"I was in a meeting this morning and all of a sudden, I had little fingers poking on the back of my chair and 'Buzz Lightyear' popped up into my meeting," she said.

"It's tough, it really is and if you didn't have an employer that was understanding, I don't know what you would do."

"Many parents, particularly as we move out of summer holidays, rely on early education and care to ensure that they can go off to work, many in essential roles, to ensure our economy keeps going," she said.

"It has a huge impact on families not knowing how they are going to manage, potentially taking annual leave or leave without pay, that has economic consequences not just for the economy, but for families themselves.

"We know this has been coming, we have had two years to prepare."

Leaders in the childcare sector say a secure supply of free Rapid Antigen Tests (RATs) are key to reducing isolation and centre shutdowns.

"A lot of services are relying on the rapid antigen tests, asking staff to use those if there has been an exposure, or to get a negative test before they come back to work and of course they are in such short supply," says CEO of Early Childhood Australia Samantha Page.

The Victorian government announced last year it would provide RATs to "education contacts" who are encouraged to take the tests for five days after being notified of an exposure.

A spokesperson for NSW Education said the department was "proactively sending RAT kits to all services".

In Tasmania, RATs are available for symptomatic people and close contacts at state-run distribution sites and the ACT government says it is "considering" the use of RATs in childcare centres.

Ms Page said the requirements for accessing financial help when a centre has to close must also change as currently the federal government will only cover gap fees if a centre was directed to close by a health authority.

The Acting Minister for Education, Stuart Robert, was approached for comment about the inconsistent approaches at childcare centres across the country, but referred the matter to the federal health department.

The rules for isolating across Australia

The approaches vary greatly between states and territories when it comes to deeming who has to isolate after exposure in a childcare centre.

NSW Health has caused confusion, with this line on its website — "If your child was exposed in an early childhood education centre (preschool or childcare), the centre will advise you what to do."

In Victoria, if you've had 15 minutes of face-to-face contact with or spent two hours in the same indoor space as someone infectious but you aren't symptomatic, you are encouraged to take a rapid antigen test each day for five days.

In Queensland, a close contact, who must isolate for seven days, is "a person who has spent more than four hours with the diagnosed person in a house or other place of accommodation, care facility or similar."

Although, some childcare staff may be exempt in Queensland, if they meet critically essential worker requirements.

Tasmania has a similar definition to Queensland — a person who has spent more than four hours with an infected person or attended a venue the health department deems is a risk.

An ACT government spokesperson explained "if someone at a service does test positive, the service conducts a risk assessment developed by ACT Health."

"Anyone identified by the assessment as high risk is notified by ACT Health and must get tested and isolate for seven days."

For the Northern Territory, the definition is more broad, "someone who has been near enough to a person with COVID-19 while they were infectious that there is a possibility, they will have been infected with COVID-19."

South Australia defines a close contact as someone who has a close interaction, for 15 minutes or more, not wearing masks and in an indoor setting, or who attends a place deemed a high-risk exposure site.

Western Australia has the most encompassing definition: "a person who has had face-to-face contact OR shared a close space, for any amount of duration, with someone who has been diagnosed with COVID-19 (while they were considered infectious)."