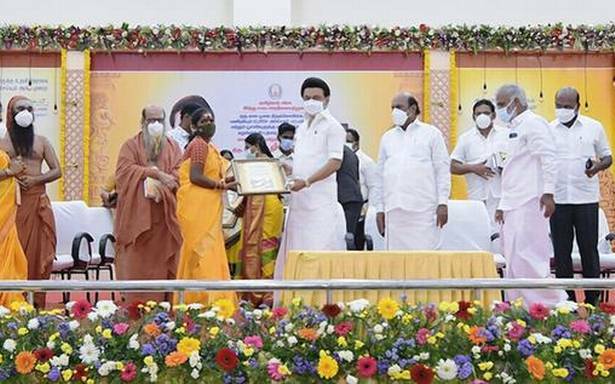 Chief Minister M.K. Stalin on Saturday launched a scheme to provide a monthly incentive of ₹1,000 each to 12,959 archakas and bhattachariars of oru kaala puja temples (those where pujas are conducted only once a day).

Addressing a gathering of priests, Mr. Stalin said his government would implement all schemes announced by it. No scheme would remain an announcement, he said. Plans were made to ensure their implementation, the Chief Minister said. “I will conduct regular review meetings and ensure that Ministers and officials do their work properly,” he said.

So many changes have been made in the HR&CE Department. Temples are being renovated, new temple cars are being made, priests are getting incentives and the government has increased the fixed deposits of oru kaala puja temples to ₹2 lakh each, he said. “The golden era of the Department is to come soon, and we will be here to see that,” Mr. Stalin said.

“The government will incur an additional expenditure of ₹13 crore, annually, to provide incentives to the priests, but I see it as a way to uplift the families of the priests. Anna has said that we should see God in the laughter of the poor, and nationalist poet Subramania Bharathi has said God will bless us if the downtrodden are uplifted,” Mr. Stalin added.

Ministers E.V. Velu and Ma. Subramanian, Secretary B. Chandra Mohan and Commissioner J. Kumaragurubaran were present on the occasion.