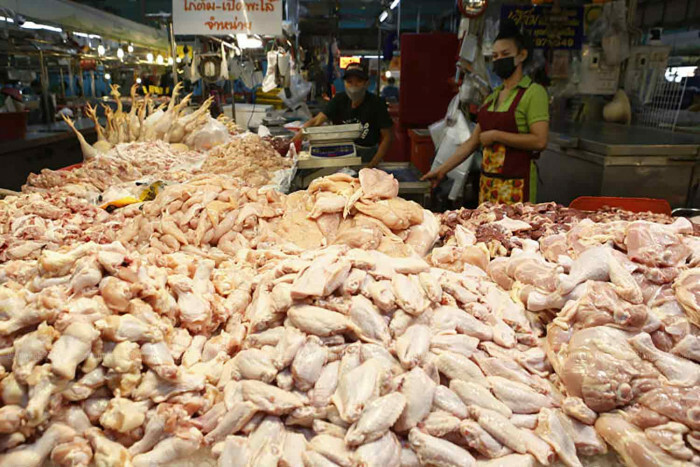 The Internal Trade Department and traders in the poultry industry have agreed to freeze chicken prices for six months while steps are taken to solve the problem of soaring pork prices, department director general Wattanasak Sua-iam said on Tuesday.

He said the price of live chickens at farms is capped at 33.50 baht per kilogramme; fresh whole slaughtered chicken (with or without offal) at 60-65 baht/kg, thighs and drumsticks at 60-65 baht/kg and breast at 65-70 baht/kg. The price controls are effective until the end of June.

The Internal Trade Department felt any price iincrease was inappropriate as this time. Talks would be held with people in the industry on Tuesday afternoon, he said.

According to Mr Wattanasak, high pork prices were partly caused by small-scale pig raisers closing down their farms, as the price of animal feed had risen by 7%. This resulted in the supply of pork to the market falling by about 30%.

In a bid to bring down prices, the Internal Trade Department had launched a project selling  pork at a competitive 150 baht/kg at selected outlets until the end of January.

He said the cabinet would asked to allocate extra funding for the project from the government's Central Fund, and the number of outlets selling low-priced pork would be increased from 662 to 1,500.