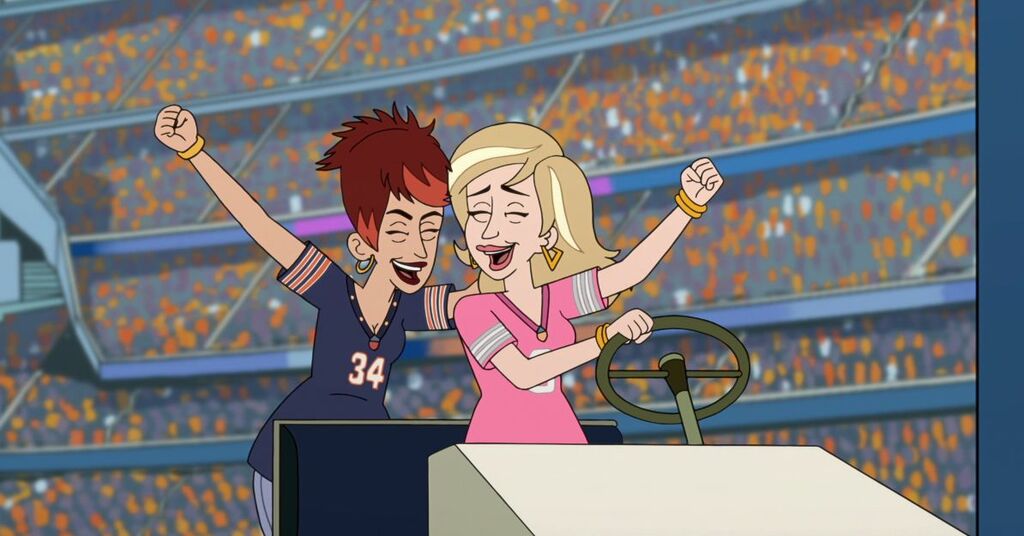 The Netflix animated series “Chicago Party Aunt” is a bawdy, rollicking, farcical, hilarious and surprisingly warmhearted love letter to the Chicago (and the Chicago area) of deep-dish pizza and pictures of “The Fridge” on the fridge, of Wrigley Field and the House of Blues, of Gibson’s and Rosebud, of shots of Malort, of Ribfest and the Chicago Marathon and the CTA holiday train.

And oh, the characters you’ll meet! Not since the heyday of Bill Swerski’s Superfans on “Saturday Night Live” have we heard so many folks speaking in such broad Chicago accents and behaving in such stereotypical Chicago ways — but the satire is executed with wit and affection, and we’re too busy laughing and nodding our heads in recognition to even consider being the least bit offended.

Based on the insightfully funny Twitter account created by St. Charles native and former Chicago writer-actor Chris Witaske, “Chicago Party Aunt” gives his alter ego a name: she’s one Diane Dunbrowski (voiced by Lauren Ash in a terrific performance), a middle-aged, part-time hairdresser and full-time party animal who squeezes her “mom bod” into too-tight jeans, treats even a weeknight like it’s New Year’s Eve, is fiercely devoted to all things Chicago sports and is prone to making observations like, “Sucking face with a rando is what Halloween is all about,” and “[Chicago’s] bridges are like gas station Viagra. You have four or five minutes before it actually goes up.”

With relatively simple, brightly colored animation setting the tone, “Chicago Party Aunt” follows a sitcom-type format, with each episode running 23 or 24 minutes and featuring self-contained adventures — but there are also some running storylines, and we get to know and like the key players a little bit better with each chapter.

Diane lives in a Wrigleyville loft apartment so close to the Cubs’ home field you can see the stadium lights through her windows. Not that she can afford such a place; she’s there by the grace of her suburban-based and judgmental sister Bonnie (Jill Talley) and Bonnie’s milquetoast husband Mark (Ike Barinholtz), who own the property and are about to sell it when Bonnie has second thoughts and comes up with a proposition: Diane can stay there, but her nephew Daniel (Rory O’Malley), who is gay and shy and uncertain about his future and has decided to put off going to college, will be moving in, and it’s up to Diane to look after Daniel and help him find his way. Oh, Bonnie. Have you learned nothing from being Diane’s sister all these years?

The cast of wacky and lovable supporting players includes Witaske as Diane’s ex-husband Kurt (two times over), who proudly displays a Ditka mustache and works for the TSA at Midway Airport; Jon Barinholtz as Mikey, Diane and Kurt’s refrigerator-sized son, who has been hit in the head with a ball or a puck at virtually every major Chicago sporting venue; Katie Rich and Da’Vine Joy Randolph as Diane’s friends and co-workers, and RuPaul as Gideon, a recent arrival from New York City who is transforming the hair salon into something modern and holistic, much to Diane’s horror.

Various episodes of “Chicago Party Aunt” are set in such familiar spots as a tailgate party at Soldier Field prior to a Bears-Packers game; the Field Museum, site of the annual awards known as “The Beefys,” honoring Windy City excellence, and Roscoe’s Tavern, where Diane attends a Halloween costume party. Sometimes the puns are borderline corny, but they’re still pretty great, as when Diane mentions “The Ghost of Christmas Pabst,” or when there’s an accident and we’re told, “Looks like a steamroller took him out on Manhattan road,” or when we visit “Osco Jewelers,” LOL. Many of the Chicago references (Styx, Jim Belushi, “Chicago Med”) also have national recognition, but when Diane pulls into the parking lot of Binny’s, or there’s an animated version of a certain local weather forecasting legend, it feels like the jokes are all ours.

Through all of Diane’s madcap adventures, from her penchant for messing things up with her extended family to her refusal to acknowledge it’s no longer 1995, we sometimes cringe at her behavior, and we often understand why she drives everyone crazy — but there’s also something lovable about her as well.

Maybe that’s because just about everyone has a Chicago Party Aunt in their life, whether she’s actually an aunt or not.