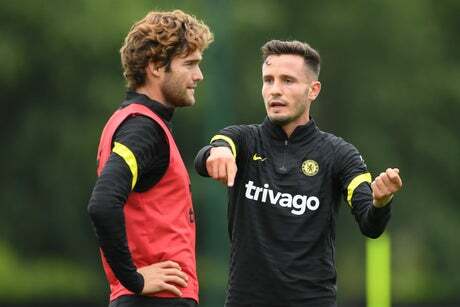 Chelsea will sign Saul Niguez on a permanent basis if he can rediscover the form that made him one of the most sought-after talents in Europe.

The deadline-day loan signing has a year to convince the European champions to take up a £30million option to buy him from Atletico Madrid.

Midfield and central defence will be the priority positions for Chelsea to fill over the next two windows, with Declan Rice a long-standing target.

But Chelsea’s refusal to commit to a permanent deal for Saul in the final hours of the last window – a stance that threatened to see the move collapse – should not be misread as a lack of interest in the 26-year-old.

Thomas Tuchel was determined to add him to a squad with a depth of strength in midfield because he believed he would offer a new dimension and a top-class alternative to N’Golo Kante, Jorginho and Mateo Kovacic.

He is seen as a player ideally suited to the Premier League – but also Tuchel’s high-energy style having worked under the hugely-demanding Diego Simeone.

He is a box-to-box midfielder unlike Jorginho – who was eager to head to Stamford Bridge after being assured he would play in his preferred position, after latterly being deployed at wing-back at Atletico.

That has affected his form and reputation to the point that the Spanish champions were not only prepared to let him go this summer – but also pushing to do so on a permanent basis for a cut-price fee of £30million.

That is some come down for a player who had a release clause of £130m written into his contract just four years ago.

There is a feeling at Chelsea that they might have pulled off a major coup in securing him for just a loan fee and bolstering arguably the strongest midfield in the country.

On the face of it, Saul was more of a ‘want’ than a ‘need’ for Tuchel, who had already permitted Billy Gilmour to join Norwich on loan due to the lack of game-time he could offer the Scotland international.

But in Saul – who had been tracked by Chelsea for the past two years – he has added a ready-made, proven winner to his squad. A player who can relieve the pressure on Kante, who limped out of their last game before the international break against Liverpool at half-time.

Chelsea are working on a new deal for the 30-year-old France international – but there is an acceptance that he may need to be saved from himself in terms of his incredible levels of stamina, while injuries have become more frequent.

Jorginho’s outstanding form over this calendar year have seen him become a European champion for club and country – but how much of that was down to the fact that he was used so sparingly by Frank Lampard during the first half of last season. His agent has also made little secret of his desire to return to Italy, which could mean Chelsea are in the market for more than one midfielder in the not-too-distant future.

And while Kovacic has been one of the big winners under Tuchel, there remain doubts as to whether he can be the leading man in midfield.

Saul has been that for Atletico – and the chance to focus on his strongest position once more could return him to his finest form.

He was certainly a chance worth taking from Chelsea’s point of view as they continue to track Rice and monitor other targets, including Monaco’s Aurelien Tchouameni.

Yet, as the transfer deadline approached last month, Saul admits he thought his chance had gone after a day of negotiations had still failed to reach resolution.

“This transfer is a step out of my comfort zone for me,” he said. “I believe you will see a new Saul in a new place.”

If he and Tuchel are right, he could be one of the coups of a remarkable transfer window.