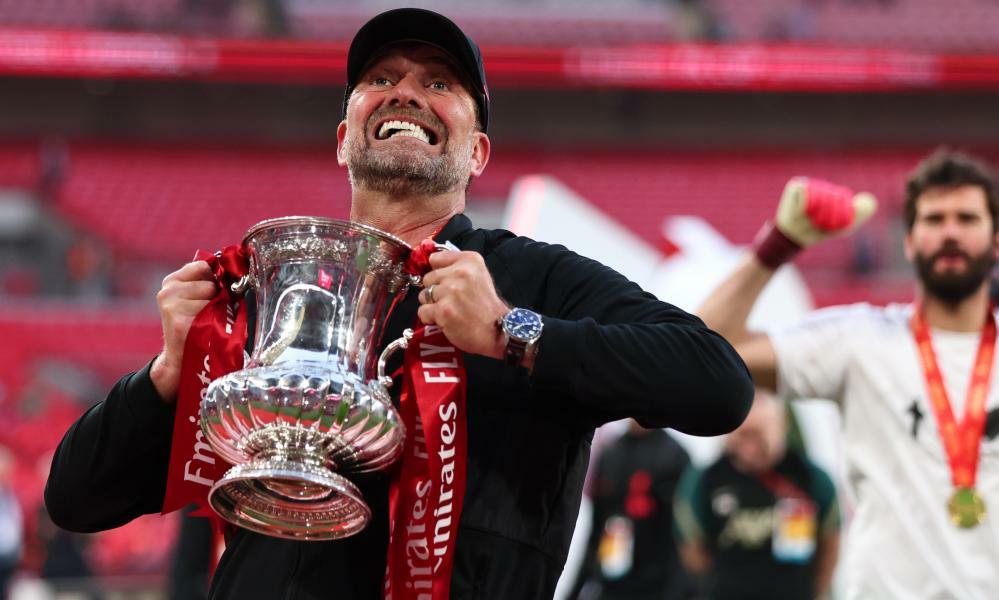 Sports Illustrated
From analysis to good news, read the world’s best news in one place
Hamlin "emotional" after Busch claimed win for his 23XI NASCAR team

By Barney Ronay at Wembley

Sometimes a miss really is as good as a mile. Wembley was a fevered place at the end of this gruelling, apparently endless FA Cup final. As the Liverpool players capered at the eastern end of the ground, lost in a fog of red smoke, tumbling and rolling on the grass in front of a stand that seemed a single mess of limbs and light and noise, the contrast in the other half of the pitch was unavoidably stark.

Chelsea’s players sat, bereft, on the turf as the end behind them emptied out. And at that moment these two entities seemed to be heading in entirely opposite directions. For Jürgen Klopp’s Liverpool this is now a definitive, era-marking season, two domestic cups in the bag and another final to come, the semi-impossible dream of the quad still there.

For 120 minutes Wembley had provided a point of intersection for these two clubs, roped together once again on this stage, chasing the late afternoon sun. But like trains hitting the points and shearing off on their own arc, the sense of separation felt profound at the end.

For Chelsea this was always a chance to say goodbye to something. The Age of Abramovich has been pegged out around these summer beanos, the Metropolitan line north thronged with blue shirts and pink flesh, the sense of a stroll, a spree, a flag day. There will be more of these days, other glories, other eras, other billionaires. But nothing quite like that endlessly giving hand. And there would be no Viking funeral here.

Whereas for Liverpool the Klopp supremacy keeps rolling on. This, it turns out, is the sweet spot. How far can it run on from here? There had been a sense that the thing Klopp has built needed a little filing at the edges. Up until the spring of this season a total of two trophies felt a little light for six years of furious progress, for the memories, the style, the imprint made on English football.

Triumphing in the current title race looks a very long shot from here. But should Liverpool beat Real Madrid in two weeks’ time Klopp’s side are looking at a domestic cup double, plus champions of Europe, plus 90-odd points in the league. It would be one of the great Liverpool seasons; one of the great English seasons.

That final European step looks more daunting after the loss of Mohamed Salah and Virgil van Dijk to injuries here. But two weeks is a decent cushion. And victory here will also speak to Paris, and that shot at the sun. Liverpool will travel light. There is just something about this team and finals.

The margins are, of course, fine: penalties at the end of 120 minutes, the width of a post, a one-handed save. But somehow it always felt like the day was heading that way.

Wembley had been a delicious, sunlit spectacle before kick-off, the pitch jammed with so many pre-match sideshows – the band, a flag, some soldiers, Pete Tong and his record player. Last year had been a meagre, plague-football affair. This, by contrast, was all the toys in the bag, the full flush of smoke, noise, tongues of fire. But yeah, you kind of knew how it was going to the end, even then.

Chelsea were poor early on, a team that didn’t seem to know how to move forward, how to take the ball up the pitch, where to make it stick. For Liverpool Luis Díaz was electric, skating inside with that easy gliding style, a footballer who is completely unafraid, who will take you into those horrible spaces and stretch you thin.

The afternoon began to unwind from that point. By the end, two hours in, the sun had faded to a watery glaze. The players sunk into a huddle by the touchline, draping themselves in towels. The Chelsea physio pounded the thighs of Trevoh Chalobah like a man kneading a batch of prized sourdough. And by that stage the rolling total stood at 420 minutes between these two teams, stretching back to August last year, without an edge between them, outside that extended penalty shootout in the spring.

Liverpool had looked a little lacking in peak freshness, although they kept running even as the game began to set around them. It fell to Mason Mount to miss the decisive penalty, striking it well enough, but seeing Alisson make a brilliant one-handed save. Kostas Tsimikas rolled the ball into the corner and in that moment the day finally split in two.

For Liverpool there is the delicious symmetry of a domestic cup double, a feeling of some marker left in the record books. Klopp finally has a toehold with domestic cups: this was his third in the last 10 years, his second in three months. Thoughts will now turn to the chance to gorge at the season’s end, and to a kind of ultimacy that is now within this team’s grasp.