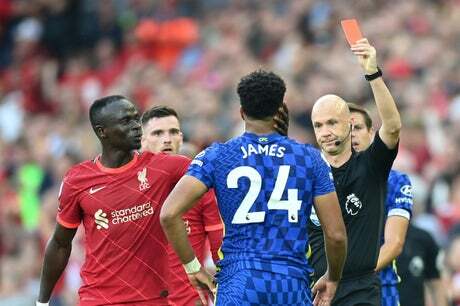 Chelsea have been fined £25,000 by the Football Association (FA) for failing to control their players following Reece James’ divisive sending off in the Premier League clash with Liverpool last month.

The Blues admitted to twice “failing to ensure that its players conducted themselves in an orderly fashion” in the lively 1-1 draw at Anfield on August 28, both after defender James was shown a straight red card for diverting Sadio Mane’s shot off the line with his hand and for their subsequent sustained protestations at referee Anthony Taylor’s decision following the half-time whistle.

A statement from the FA on Wednesday read: “Chelsea FC has been fined £25,000 for two breaches of FA rule E20.1 which occurred during their Premier League fixture against Liverpool FC on Saturday 28 August 2021.

“The club admitted failing to ensure that its players conducted themselves in an orderly fashion during both the 48th minute of the first half and following the half-time whistle.”

Chelsea had led 1-0 on Merseyside courtesy of Kai Havertz’s excellent 22nd-minute header, only for Mohamed Salah to equalise from the penalty spot and earn a share of the points after James’ dismissal.

The incident was subject to a lengthy VAR check, with Taylor advised to view the footage on the pitchside monitor before he then made the decision to produce the red card.

James’ team-mates were furious and felt the ball had deflected off James’ thigh and up onto his arm, though current FA rules state that denying a goal or an obvious goalscoring opportunity with a handball is a red card - it does not matter whether the handball was accidental or not.

Chelsea boss Thomas Tuchel, meanwhile, said Taylor only checked a still image showing the contact with the hand rather than viewing a full replay of the incident.

“I can understand the decision and I’m not saying it’s wrong,” Tuchel said after the game. “But I did not like the way the referee checked it because for me he checked only the image and the image showed the contact.

“We saw on the bench that it was a deflection from a short distance that came off his hip and the arm was not in a super unnatural position. I would have wished for a longer consultation – maybe he would have made the same decision. But we have to live with it.”