A woman killed with her three dogs when they were hit by by an Audi in Chelsea, west London, has been named.

Olivia Riley, from Suffolk, has been identified by Scotland Yard on Sunday. The 41-year-old's family are being supported by specialist officers.

The driver of the car. a 26-year-old man, has been arrested on suspicion of causing death by dangerous driving.

Officers were called to Cheyne Walk at 6.21am on Saturday to reports of a collision involving a pedestrian, animals and a vehicle. The car also demolished a traffic light before coming to a halt.

Ms Riley was found dead at the scene and the dogs, all golden retrievers, died as a result of their injuries, the Metropolitan Police said.

A crime scene cordon was in place on Cheyne Walk, a historic mansion-lined road that stretches along the River Thames, on Saturday afternoon.

Forensic officers were seen at the junction where Albert Bridge meets Chelsea Embankment, and a blue forensic tent was pitched on the road.

Former residents of the affluent street, where house prices average £3.5 million, include actors and writers such as Laurence Olivier, TS Eliot and Ian Fleming.

Most of the houses on the road were built in the early 18th century. Before the construction in the 19th century of Chelsea Embankment, which runs in front of it, the houses fronted the Thames.

A post on the Royal Borough of Kensington and Chelsea Twitter account said: "We're saddened to hear about the tragic collision on Cheyne Walk. Our thoughts are with the family and friends of the woman involved".

Greg Hands, the Conservative MP for Chelsea and Fulham, said: “Awful fatal car crash in Chelsea this morning. I suspect the (unnamed) victim was local, so I am available to help her family and those bereaved. My thoughts with all of them.”

Police have launched an appeal for witnesses. 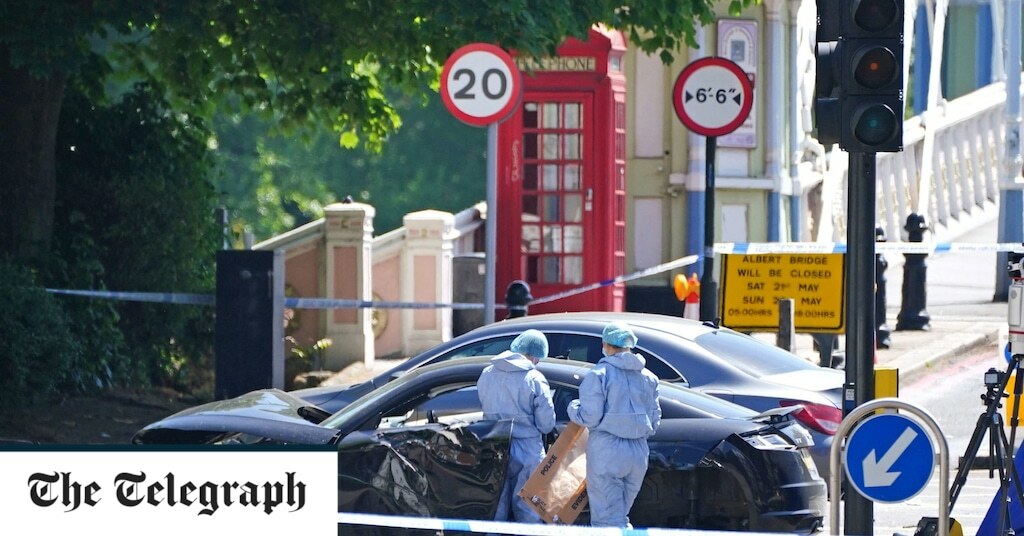 Woman and three dogs killed in Chelsea car crash
The driver of the car, a 26-year-old man, has been arrested on suspicion of causing death by dangerous driving

The Telegraph
One subscription that gives you access to news from hundreds of sites
Chelsea tragedy: Police name woman killed in car crash with three dogs

Police and paramedics were called to Cheyne Walk, Chelsea, at 6.21am on Saturday

Olivia Riley, 41, from Suffolk died after car hit her in Chelsea, police say, and driver has been arrested