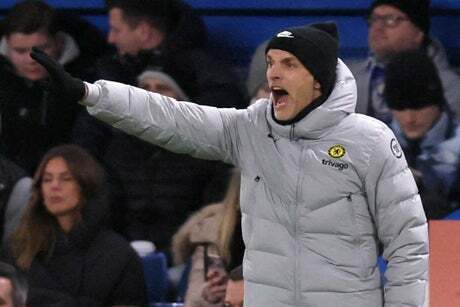 Thomas Tuchel is convinced this can still be a trophy-laden season for Chelsea, despite seeing Manchester City open up a commanding lead in the title race.

The German is adamant there will be no let-up in his bid to add to the Champions League trophy he won last term as he sets his sights on four cups in the second half of the campaign.

Chelsea are still competing on all fronts as they defend their European crown and prepare to head off for the Club World Cup in Abu Dhabi next month.

They are 90 minutes away from the Carabao Cup Final, holding a 2-0 lead over Tottenham ahead of their semi-final second leg against Antonio Conte’s side on Wednesday.

And on Saturday, Chelsea booked their place in the fourth round of the FA Cup with a 5-1 win against Chesterfield. They will face Plymouth in the next round.

Tuchel underlined his determination to ensure he delivers more silverware by naming a team packed with internationals against non-league Chesterfield.

He insisted his decision had nothing to do with City’s 10-point lead at the top of the Premier League. But at a time when the Chelsea manager has repeatedly raised concerns about the demands being placed on players in the wake of the latest Covid spike, it was clear he was not prepared to take any risks even against such limited opposition.

“If we had more points in the league and would be closer to Man City it would have been the same lineup,” he said. “It is just this game to play, so it makes it the most important game.

“Of course we knew that it is a fifth-division team. We took some risks. Only four players in build-up and six to attack. We did this and relied on the seriousness and the discipline of the players, which they showed and so the job is done.

“Once we come out and play we play for our spectators and for ourselves and we want to win the game.”

Meanwhile, Tuchel has been encouraged by the progress made by Saul Niguez in recent weeks after the Spain midfielder endured such a torrid start to life at Stamford Bridge.

The on-loan Atletico Madrid star has struggled to acclimatise to life in the Premier League, but impressed in last week’s win against Spurs and again against Chesterfield.

Tuchel said: “He is more confident and in better shape. A huge step forward was the performance against Tottenham in the Carabao Cup.

“The adaptation has gone further and you can see he is more open, understands more, and has had much more impact than at the beginning of the season.”