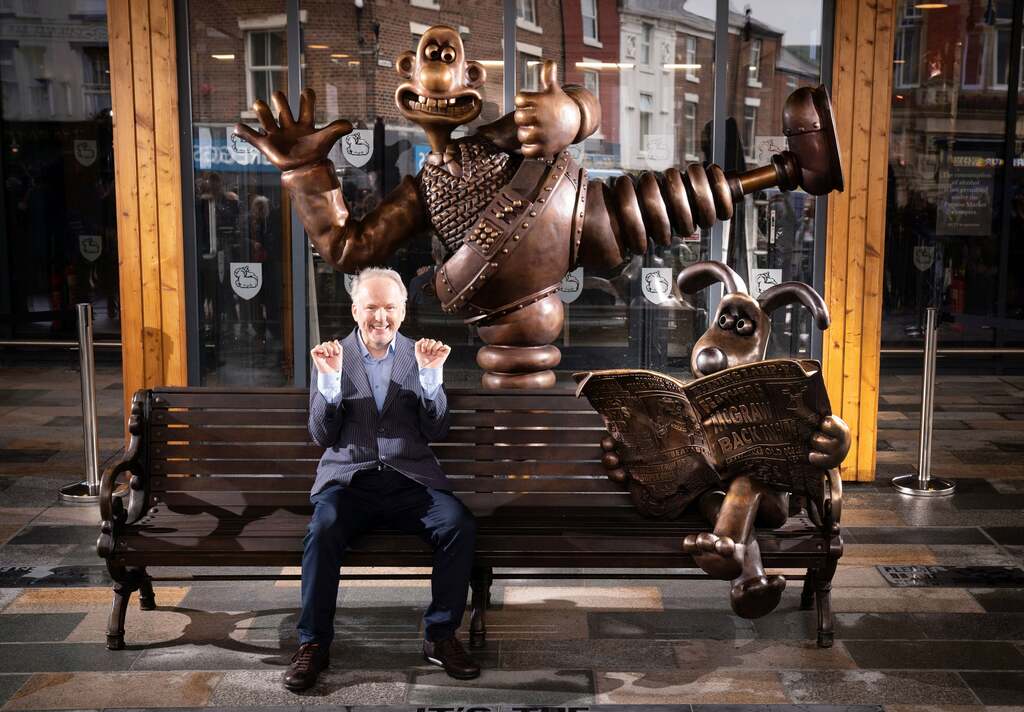 Get ready to feel some major childhood nostalgia.

A large bronze statue of the iconic TV duo Wallace and Gromit has been unveiled in Preston, Lancashire.

Famous for getting caught up in random adventures – from travelling to the Moon and busting a sheep-rustling criminal, to enduring the Curse of the Were-Rabbit – it was only fitting that the statue celebrated one of these antics. The bench sculpture shows the inventor and his loyal doggo companion as they appeared in the short film “The Wrong Trousers.”

The synopsis for the 1993 film reads: “Wallace takes in a new lodger, a devious penguin. Spotting some techno-trousers, the penguin plans a grand theft, a plan that involves putting Wallace in danger. Will Gromit be able to stop the feathered fiend?”

Wallace appears to be sporting the infamous “techno trousers” in the sculpture, balancing on one leg while giving a reassuring thumbs-up, while Gromit remains perched on the bench reading a newspaper and minding his own business.

And here it is! Nick Park with #WallaceGromitBench in #Preston @aardman pic.twitter.com/QbdNgjm4sV

The bench has been funded through the £1million worth of funding allocated to Preston from the government’s national Towns Fund, and there are four more similar “Pop-Up” projects in the works.

The aim of the project is to encourage people back into the city after the pandemic and from looking at the reaction on Twitter it seems to be a hit, as people have been sharing their delight at the new statue and are already planning a visit to see it.

Now this is a statue I can get behind 👍 https://t.co/8NizvuMSI9

Great news Gromit!! Now to pack some Wensleydale and a picnic to take the kids to see the bench! https://t.co/fHsP0C3MiE

I need to visit this statue one day.

And they need to make another Wallace and Gromit feature film. It has been too long, for God's sake!#WallaceandGromit https://t.co/5S1MeoIZ4D

While other people cracked some jokes and shared some observations about the cheese-loving duo’s new statue.

After the unveiling of the Wallace and Gromit statue today in Preston, one man has been seen planning to vandalise the statue... pic.twitter.com/PIZJlXfnDu

It's cool that Wallace and Gromit are getting their own statue, but is nobody going to talk about how it's erected in Preston, a city that shares a name with this hell hound? pic.twitter.com/RDPYNodABa

What if me and you held hands while sitting on the Wallace bench👉👈 https://t.co/UX01Y3JxoQ

Returning to his hometown of Preston to unveil the statue, the Oscar-winning creator Nick Park shared his thoughts back in June when the tribute was first announced: “It is such a great honour for me, as a proud Prestonian, to see my characters Wallace and Gromit cast in bronze and given pride of place in my hometown,” Lancashire Post reported.

Visitors are encouraged to share photos of themselves online of them sitting on the bench with the hashtag #WallaceGromitBench.

All this talk of the comedy show has got us craving some Wensleydale cheese...

20 years later, seven people reflect on their memories from 9/11