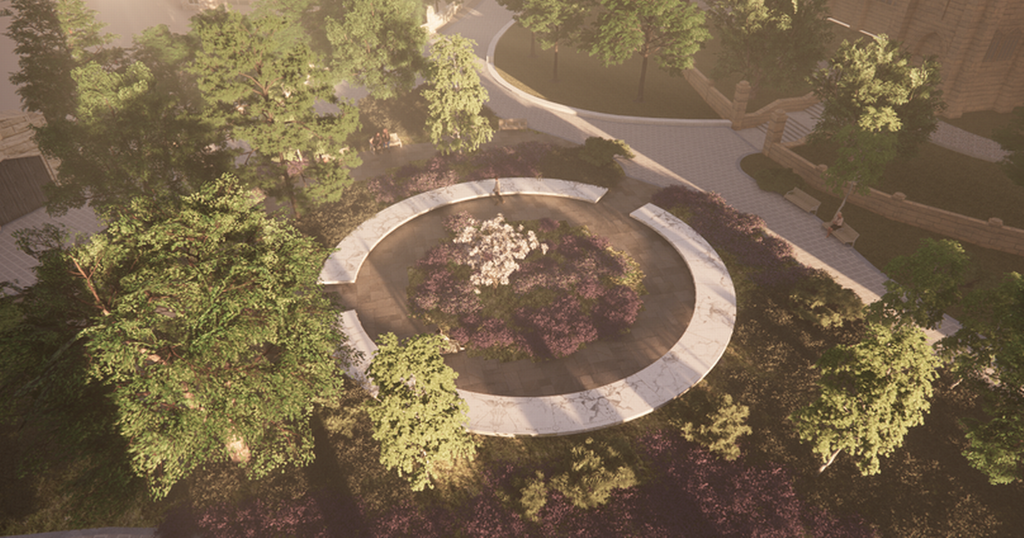 Families of the Manchester Arena bombing victims have spoken of their anger after changes were apparently made to the design of the memorial without their knowledge.

Work on the Glade of Light is currently ongoing at the site next to Manchester Cathedral and is scheduled to be complete this winter.

Manchester Council first announced that designers had been appointed in 2018 and stated that families of the 22 victims of the atrocity would be consulted throughout.

A planning application for the memorial was approved in January.

However, last night a number of Arena families took to Twitter to claim that crucial elements of the design they thought were going ahead have been scrapped, notably a water feature.

Claire Brewster, who lost her sister Kelly in the blast, tweeted a statement to Manchester Council adding: "Wouldn’t usually do something like this but seeing as it’s a public memorial I think the public need to know."

In her statement, Claire stated that Kelly's family have been attending meetings about the memorial 'for years'.

"It is something which is so important to us it just has to be perfect," she wrote.

"We visited different sites for the memorial, gave input and voted on design plans."

"We were so happy to see Glade of Light had been chosen and how perfect a design this was for our loved ones.

"Since development began I have visited the site numerous times and taken progress photographs, eagerly awaiting the time when we can choose and plant a tree in Kelly's memory, and leave a message to be transcribed onto the most beautiful water feature."

"We are absolutely gutted to only now learn that the beautiful features which made us fall in love with this memorial design are no longer being included, and given how close we are to the memorial being complete I'm guessing there is nothing we can do about this.

"We will no longer be choosing a tree, or even planting one.

"And we will no longer be having the beautiful water feature that we felt was so fitting.

"As far as can recall we have never been told about this, asked for our input or shown a new design.

"We were promised at the beginning of this process that families would be considered and updated all the way.

"Well Manchester, my family for one feels cheated, devastated and completely ignored and left out of something so important to our family and my sister's memory. Thank you very much for that."

Mark Rutherford, dad of 17-year-old Chloe, added: "Absolutely devastated, no engagement throughout the process as promised. This is not what we voted for."

Figen Murray, who lost her son Martyn Hett, wrote: "Claire, I have been so wrapped up with my dissertation that I missed all that.

"I agree with you that we should have been informed and wonder why all this changed?? I thought we were going to be included in decisions?"

Pat Karney, the council's city centre spokesperson, promised to get the bottom of what happened.

He tweeted Claire: "I was very upset to read your comments. I have not been involved in the memorial.

"The very last thing in the world that Manchester would do would be to add more pain to our Arena families.

"I will talk to the Council Leader and Chief Executive and ask them to contact you."

In a press release from January, Manchester Council said Glade of Light had been designed as a 'peaceful garden space, with a planting scheme planned to ensure year-round colour and reflect the changing seasons - a living memorial entirely using plants which grow naturally in the UK countryside.'

"Tree locations have been calculated to maximise light and ensure the garden gets as much sunlight as possible," it added.

"The centrepiece of the memorial is a white stone ring 'halo' which will bear the names of the 22 who lost their lives set in bronze, with personalised memory capsules - containing memories and mementos to be provided by their loved ones- held within the stone."

The council issued a statement today addressing the concerns raised by family members on Twitter.

A spokesperson for Manchester City Council told the Manchester Evening News : "The Glade of Light memorial remains very close to the original outline design - a garden memorial with a marble stone halo engraved with the names of those who lost their lives as its centrepiece.

"Memory capsules to be embedded in the halo will give families the opportunity to add their personal words, memories and mementos for all time.

"There have inevitably been some adjustments to that outline design based on both feedback from families and practical considerations, but families were updated and the revised designs were shared with them.

"We are deeply sorry if some families consider they were not sufficiently informed and will be writing to them to address any concerns.

"Everyone involved is committed to creating a beautiful place of remembrance which honours those who lost their lives. We believe that the memorial, which is close to completion, will be a peaceful and fitting tribute.

"Families of those who lost loved ones are also being offered the opportunity to visit the memorial before it is open to the public."