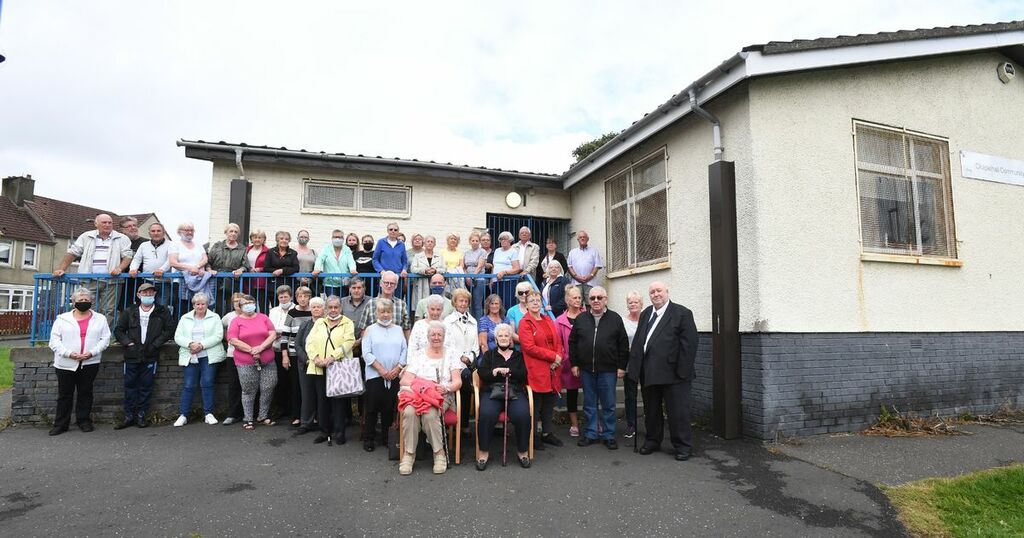 Community groups in Chapelhall are battling for the future of a popular facility in the centre of the village after learning that it will remain closed for more than a year due to a need for thousands of pounds of “substantial” repairs.

The busy senior citizens’ centre on Lauchope Street has not reopened since the Covid-19 lockdown, with a structural survey carried out after users had highlighted ceiling water leaks revealing the requirement for extensive work on its roof, estimated at £87,000.

North Lanarkshire Council say that the required repairs would take 12 to 18 months of work – and now say that there will first be a review of the area’s facilities to determine their continued “operational need” as the authority develops its planned future hubs combining education and community uses.

Members of the various groups using the centre – including pensioners’ clubs and the Chapelhall tenants’ and residents’ association – say the alternative provision at Mount Pleasant community centre is unsuitable due to its lack of car parking and the need for pedestrians to cross the village’s congested Main Street.

Having successfully campaigned to save the facility from a proposed budget-cutting closure in 2018, they are now calling for it to be repaired and reopened as soon as possible, while local councillor Michael Coyle has even begun investigating the possibility of a community asset transfer and grants to fund the repairs.

The Airdrie South representative told Lanarkshire Live how he and other visitors had begun noticing leaks from the ceiling more than two years ago, and said: “The people of Chapelhall need this hall – it was used for coffee mornings five days per week, there were lots more groups and activities like dancing and bingo, and special events like Christmas parties.

“Everybody is going wild about the cost and can’t understand how it would be £87,000 to fix. We want to get a meeting with the council to see how this hall can be repaired and reopened, even if that involves running a fundraiser.

“The council is saying they see it as dangerous to open and people can’t get back inside but can use other local facilities; meanwhile it’s getting worse inside and equipment belonging to the different groups is left there being damaged.

“Mount Pleasant has hardly any parking and you’d take your life in your hands trying to cross that busy road, whereas this is right in the centre of the village with a big car park which makes it easily accessible.

“We had a big public meeting a few years ago and saved the hall then, when everybody was in agreement that this is a very much used and needed facility – we need to do the same again as this was given to Chapelhall and its pensioners for their use.”

Councillor Coyle wrote to North Lanarkshire chief executive Des Murray, “pleading to get this centre opened again for the wellbeing of our pensioners and Chapelhall residents” and requesting that the area’s Covid recovery fund be used to meet the cost, adding: “People have indicated that they are not accepting anything less than the hall being reopened.”

Chapelhall resident Gabe Smith, who chairs the tenants’ association and is involved with various other groups at the hall, was among the dozens who showed their support for refurbishing and reopening the much-loved facility.

He said: “We always held our meetings there and there were things like coffee mornings, yoga, the over-60s’ group and lots more; that all stopped because of the pandemic but we want to get back in and restart these things.

“Everybody’s shaken up to hear about the huge cost for the repairs – we don’t know how it can cost that much but we’ve even talked about everybody who hires the hall putting some money towards it.

“People are missing out on using it and we need to have this available. Nobody will cross the main road to Mount Pleasant because of all the heavy lorries hammering down that road, and when we’ve asked in the past for traffic lights we haven’t got them; but here people can park easily and come straight into the hall, so it’s a great facility for us.”

A spokesperson for North Lanarkshire Council told Lanarkshire Live: “Following an extensive structural survey of Chapelhall senior citizens’ centre, substantial repair works are required to the roof which means that it hasn’t been possible to reopen the centre as planned after the lockdown period.

“We understand this is disappointing for those who use the centre.

*Get the A&C Advertiser for all the Monklands news

“The repair work required is extensive and would be expected to take 12 to 18 months to complete, and will follow a further review.

“In the meantime and as an alternative, Mount Pleasant community centre will be made available to establish a lunch club, and we will continue to offer support to local groups to continue to their community programmes.”