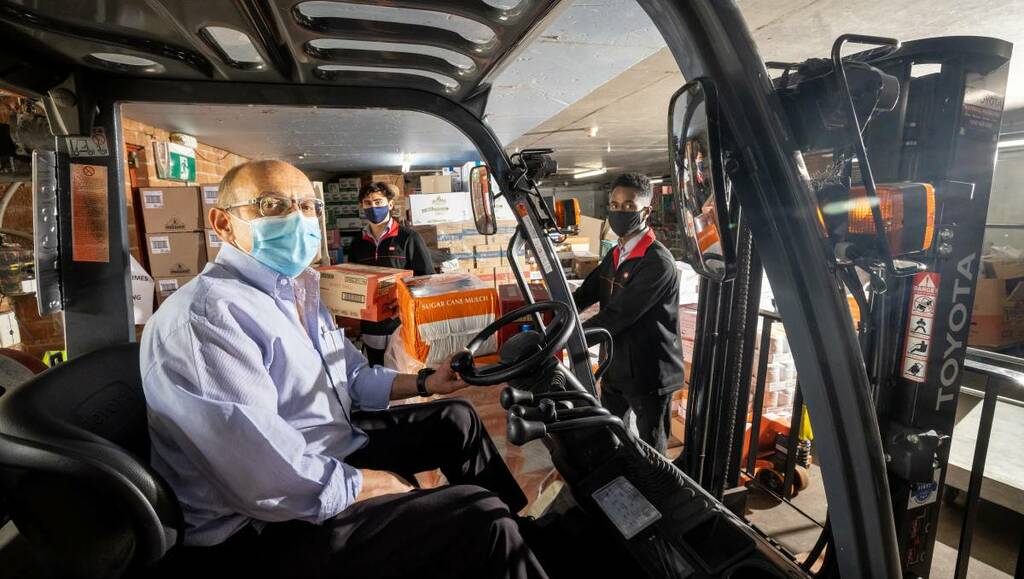 In Canberra's new normal, construction work has ground to a halt, supermarkets are bare-shelved, eateries shuttered and appointments slashed, as ballooning COVID infections wipe out staff across industries.

Some businesses say the waves of workers furloughed due to COVID have hit upon pre-existing pressure points, while others held onto staff through the capital's two-month lockdown, only to have to reduce their services as staff become unavailable.

Supply chain shortages saw Ainslie IGA co-owner Manuel Xyrakis struggling to get products on the shelves, as well as staff behind the counter.

With his main wholesaler down about a quarter of their staff, Mr Xyrakis also struggled to fill his roster as infections rose after Christmas.

"We've had up to about 20 of our staff [off] with COVID but 10 of them now have recovered and come back," Mr Xyrakis said.

"So it was a challenge just after Christmas until last week."

Bond Hair Religion owner Jenni Tarrant said she was down about a third of her staff currently, and had cancelled dozens of appointments due to the shortage.

Shortages were already prevalent in the industry, Ms Tarrant said, with salons losing workers on skilled temporary work visas throughout the pandemic.

Hairdressers were also drawn away to other professions throughout the lockdown, with Canberra salon owners saying they often lose workers to the public service.

"We're doing our very best to keep everybody safe including the clients and ourselves and we just have to roll with the punches," Ms Tarrant said.

Beaumont Concreting owner Nathan Beaumont said the pandemic has exposed an urgent need for businesses such as his to rethink how they draw in staff.

His pre-pandemic roster of 15 has been reduced to eight, with Mr Beaumont saying the company is turning away people inquiring about their services.

"We're seeing a massive labor shortage across young people, [they] aren't looking to get into trade work at the moment," Mr Beaumont said. "And we're also seeing a really high labor shortage in skilled workers."

Mr Beaumont said his workforce had previously been made up of people from interstate, with Canberra only offering a small pool to draw from.

"We used to have a lot of out of town people coming here, but now with COVID, there's just so many less people trying to relocate," he said.

The company has started brainstorming ways to entice workers, including offering new employees free beer for a year or cash bonuses, or contributing to rental bonds and moving costs.

"What used to work, just an advertisement for a job with a salary, it's just not working anymore," he said.

OTIS Dining Hall owner Damian Brabender said he was struggling more to manage his business now than he had during the territory's lockdown.

"There's absolutely no certainty that staff are going to be able to work," Mr Brabender said.

Mr Brabender said the restaurant was taking maximum bookings way below capacity due to the shortage of staff.

"During the initial COVID outbreaks and the initial lockdowns, we kept every single staff member in employment, and we've continued to do so," he said.

"It's just that now their availability to work is non-existent because, obviously people have travelled for Christmas [and] they've become close contacts."