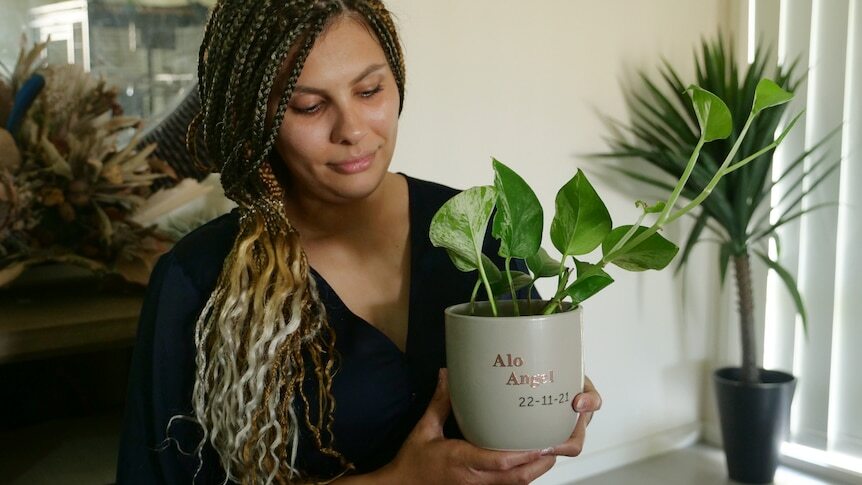 Lousynda Alo and her husband Scott could not stop smiling at the ultrasound screen, the unconditional love and pride for their baby unwavering in their eyes.

WARNING: Readers are advised this article contains details some may find distressing.

"We saw the heartbeat, little arm and leg movements, barely little arms like a little tadpole, and everything was going really well," Ms Alo said.

Weeks later, the 28-year-old felt unwell and had stomach pain.

Then there was blood.

"We went to the hospital and of course the worst thing that could happen, we found out that we had lost baby," she said.

Their baby did not develop past six weeks.

"It was classed as a missed miscarriage, so my body didn't actually recognise that baby had stopped growing, not until quite late."

In Australia, one in four women have experienced a miscarriage and six babies are stillborn every day, according to the Australian Institute of Health and Welfare.

After two successful but challenging births, an early pregnancy loss was unfamiliar to Ms Alo.

"We spent the night [in hospital]. They gave me some medication, which would help bring on labour," she said.

"I was quite distraught.

"A couple of hours after having the medication, we had our little baby."

"I was actually surprised considering there are people coming in who are actually going to be leaving with their child," she said.

"[My midwife] went looking around for things for us to have just as a memory — a little trinket or something to make it a bit softer.

"She gave us a teddy bear, but they're usually for people who have lost babies that are older."

The midwife's hunt to find "little bits and pieces" saddened Ms Alo, but it also gave her an idea.

"I started to think about how other mums and other parents would be feeling, leaving and knowing that there's nothing to take home," she said.

Inside are a candle to light when either of the parents are in pain but unable to speak, a gold charm for keepsake, a spray to overpower sterile hospital scent, sweets, and a handmade box should parents choose to bury their baby.

"I thought it would just be a nice little thing I quickly got together for anyone who needs it," she said.

The couple found comfort in bringing their baby's remains home to bury in a pot plant that "will be with us forever".

"[Scott] thought it was going to be too hard and emotional, but it's been the best thing because I feel like I still have my baby with me," Ms Alo said.

In Australia, if a baby is lost in the first 20 weeks of pregnancy its birth and death are not formally registered.

Some states, including New South Wales and Queensland, offer early loss certificates and parents are given the choice of taking their remains home.

Ms Alo shared her loss with family, friends and the community on social media, generating support and unexpected donations.

"Most of it is actually from family members of someone who has lost a child; they felt their pain and wanted to help because they knew how hard it was for them," she said.

"A lot of women commented saying, 'I wish this was around when I lost my child; we had nothing, we went home with an information package just to say what to expect'.

"That's horrible that women don't get to go home and have those little memories."

"The Women and Newborn Unit is very grateful to receive donations such as this," Ms Graham said.

"It can be very helpful for parents going through loss to hear from others who have sadly experienced a similar loss."

Sharing her grief and helping others had been cathartic for Ms Alo.

"Although it's hard to talk about something such as a loss, it's so important," she said.

Ms Alo encouraged other women to ignore the social pressure to keep things quiet in the first three months of pregnancy.

"It's nothing to be embarrassed about or ashamed of because it's not your fault," she said.

"Everybody deals with things differently but talking about it makes a massive difference."

She urged women to be proud of their experience, to work through the hurt and anger.

"I don't want them to hide, I want them to talk to people about it, let their family know, so they've got that support," she said.

Ms Alo said men should talk about loss too.

"[Scott] didn't really want to go out there and tell everybody we'd lost a child, but once they knew it, they were there for him and they also made the donations," she said.