Boston won Game 5 of these Eastern Conference finals, taking a 3–2 series lead. Viewers lost. It was 19–17 Miami after the first quarter. It was 42–37 Heat at the half. Boston shot 25% from three through two quarters. That’s downright scorching compared to Miami’s 19%. The Celtics had nearly as many turnovers in the first half (10) as they did in all of Game 4 (11). Jayson Tatum and Jaylen Brown shot 19%—the worst combined field goal percentage in any half this season.

In the second half, the Celtics blew it open. Flip the script was Ime Udoka’s message in the locker room, and Boston did just that. It outscored Miami 32–16 in the third quarter. It sliced the turnovers in half. Brown’s first half was a disaster. He had six points. He had four of the Celtics’ 10 turnovers. At one point, Udoka pulled Brown aside and asked him if he was surprised that the handsy Heat were reaching and poking the ball away.

In the second half, Brown responded. He had six points in the third quarter. He had a team-high 13 points in the fourth. He made five of his six shots in the final 12 minutes, including three of four threes. Asked about what changed for Brown, Udoka deadpanned, “He didn’t turn it over.”

“First half was s---,” Brown said. “Threw it away. Came out and played basketball in the second half.”

All season Boston has leaned on its NBA-best defense. On Wednesday, it’s what kept it in the game. The first half was a mess. Miami had 26 points in the paint. It had 16 off second-chance shots. It had nine offensive rebounds, giving the Heat a 26–21 edge overall.

But Miami was up only five. The Heat’s offense is a wreck. Jimmy Butler, battling a knee injury, has been limited to a screener and part-time playmaker. “Butler wasn’t looking to score,” said Udoka. Kyle Lowry has no burst. The reigning Sixth Man of the Year, Tyler Herro, is out with a groin injury. In Game 5, Miami’s two leading scorers were Bam Adebayo and Gabe Vincent. The Heat took 45 three-pointers. They made seven of them. Against a terrorizing Celtics defense, that isn’t enough.

“The mental stress and strain we put on some teams with our defense has worked and carried us through the playoffs,” Udoka said. “Having all those bodies to continue to throw at people wears down on [them] physically and mentally. … Our defense travels well.”

Added Brown, “Our defense is what continues to win us games. We have to keep hanging our hat on that side of the ball.”

The NBA should consider pausing this series. They won’t do it, of course. Can’t do it. But these aren’t rosters. They are MASH units. Marcus Smart can barely walk. Robert Williams, too. Butler’s knee is so bad he’s shooting set shots. Lowry isn’t even considering going to the basket. Tatum is dangling his right arm in between timeouts.

The Celtics will head home, and this series should end Friday. Frankly, it should be over already. Finished. Kaput. A third-quarter meltdown cost Boston the opener. A comedy of errors—24 turnovers!—vaporized the Celtics’ chances to win Game 3. Through the first three games Boston lost just two quarters yet trailed 2–1.

Miami is battered. Beaten. “I got to find a way to do better,” Butler said. But it doesn’t matter. As competitive as the Heat are defensively, as physical as they are in the paint, they don’t have the firepower to overcome an average defense, much less one as menacing as Boston’s. The Celtics will have to beat themselves for Miami to bring this series back to South Beach on Sunday. For two straight games, they haven’t.

“Just breathe, relax,” Brown said, when asked about closing out Miami. “Sometimes we can be a little too tense because we know how important these moments are. But just come out and play our game, and we’ll be fine.”

In a series filled with ugly games, Game 5 was the worst.

Don’t worry—there should be only one more. 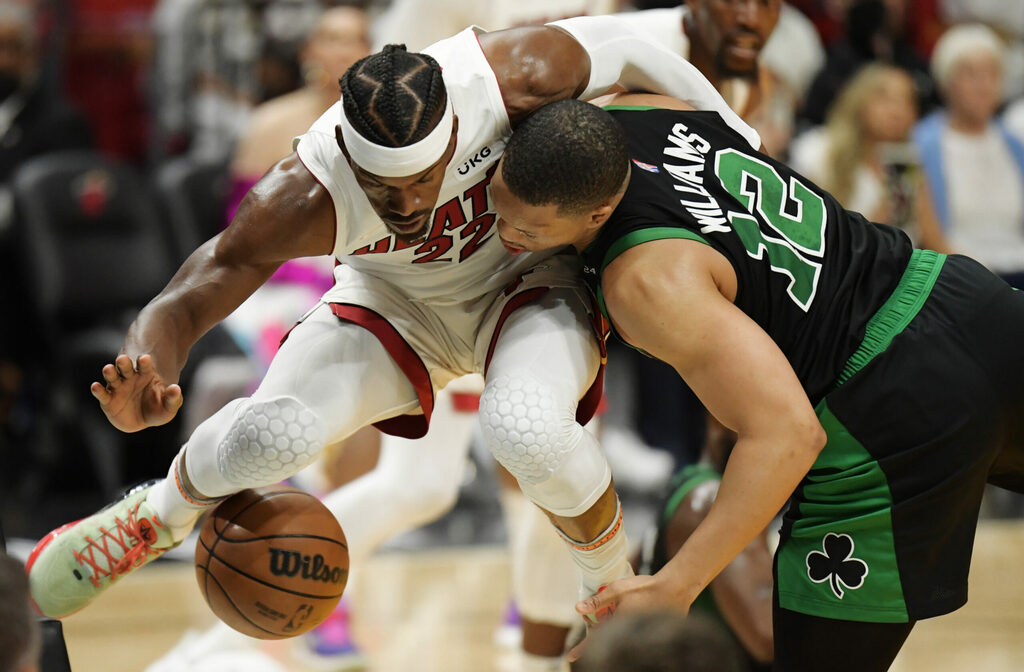 ‘You have to give Boston a lot of credit,’ says Minnesota’s Patrick Beverley of the Celtics Game 5 win over the Heat
Can the Celtics close out the East finals at TD Garden Friday?

Barry Jackson: Herro told me yesterday he is hopeful about playing tomorrow. But if medical staff thinks it's a mistake…