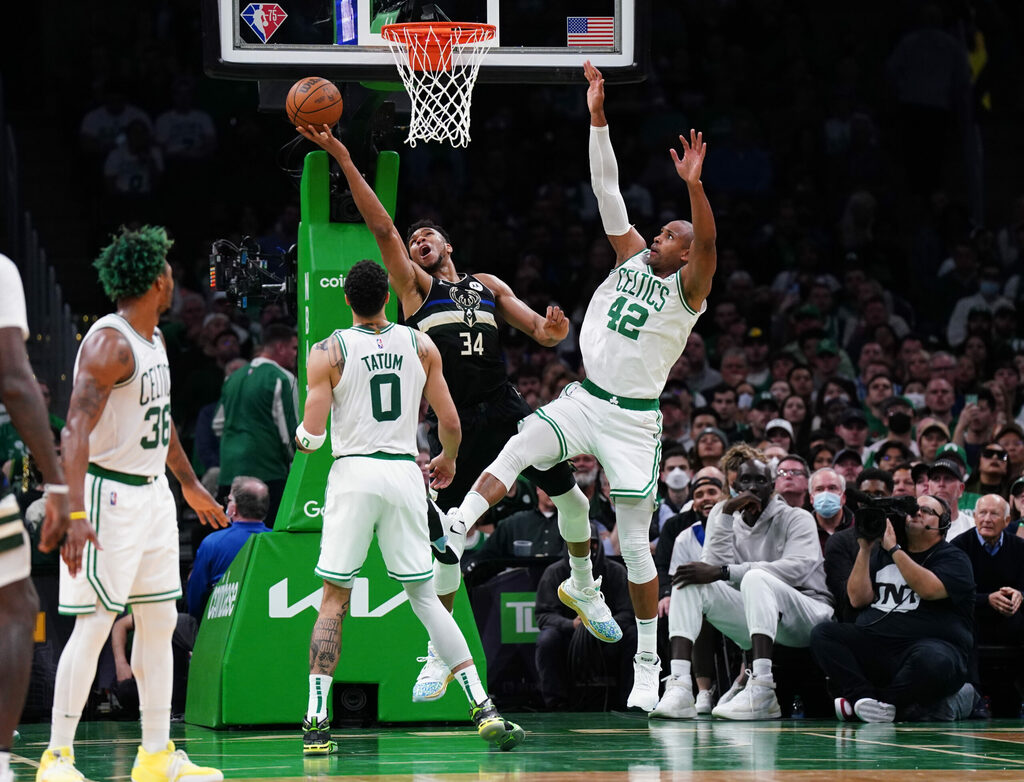 Boston Celtics highlights: Bucks steal Game 5 at the buzzer 110-107 as series heads back to Milwaukee
A rough end to an otherwise solid effort puts Boston's season in jeopardy.

Some of the best plays of the game captured in images.

AFP
Celtics reflect on squandered opportunity to win Game 5 vs. Milwaukee Bucks, how to approach Game 6

Jayson Tatum, Jaylen Brown, and Marcus Smart all had plenty to say about letting the game slip through their fingers…

Milwaukee's comeback took the Celtics by surprise -- and put their season in danger.

BOSTON — The most physical series in the 2022 playoff field produced a fresh batch of bruises and floor burns Wednesday night, and this time the Celtics absorbed the worst of it.

Bobby Portis’ putback, followed by Jrue Holiday’s block on Marcus Smart, was the difference in the Celtics’ 110-107 Game 5 loss. The Bucks, paced by Giannis Antetokounmpo’s 40-point performance, thus took a 3-2 series lead, with Game 6 set for Friday night in Milwaukee.

Thus wasted was a 34-point Jayson Tatum performance, and another 26 from Jaylen Brown. The Celtics led by 14 points with 10:16 left in the game.

But Antetokounmpo hit from downtown, Tatum missed, Portis lost control of the ball under the basket, Smart lost the ball, and with 42 seconds left Holiday tied the score (105-105) with an up-top 3-pointer.

But Tatum was fouled by Portis with 31.1 seconds left and hit twice for a 107-105 lead. Antetokounmpo was fouled by Grant Wiliams with 14.2 seconds left, and with the crowd howling the Bucks star swished the first and missed the second, only for Portis to convert the rebound with 11.2 seconds left for a 108-107 Milwaukee lead.

Smart drove, only to be blocked by Holiday at the basket with 6.6 seconds left. Pat Connaughton was fouled with 5.9 seconds left, and the Arlington native hit twice for a 110-107 Bucks lead. Smart lost the ball coming up the floor to end the game.

The Celtics led by as many as 14 points in the fourth quarter thanks to an early 7-0 run, but with seven minutes left the Bucks had cut the margin to six points (98-92) on two Bobby Portis free throws.

Wesley Matthews cut it to four (99-95) from downtown with 6:04 left, and Tatum’s foul line jumper pushed the edge back out to six with five minutes left. Antetokounmpo answered with a putback, Brown missed, and Holiday hit from 18 feet for a two-point margin.

Tatum, again from 15 feet, buried a turnaround for a 103-99 lead. Horford drew an offensive foul on Antetokounmpo, Tatum missed, Horford grabbed a tough rebound to end a two-shot possession, and then tip-dunked a Brown miss with 2:13 left for a 105-99 lead.

The Celtics closed out the third with an 86-77 lead, thanks in part to a 13-point quarter from Brown, who had 25 points by the end of three. Tatum had 22 and Antetokounmpo had 32 down the other end.

Horford, Monday night’s hero, triggered the next run with a dunk off a Derrick White dish and then hit Tatum with a floor-splitting outlet pass for a three-point play. Payton Pritchard hit from the lane off a Tatum bounce pass, and the Celtics led, 93-79.

A scoring swap ensued. Pritchard’s drive for a 98-87 lead was a big basket, though Pat Connaughton answered from downtown with 7:36 left, cutting the Celtics lead to eight points.

Boston Celtics highlights: Bucks steal Game 5 at the buzzer 110-107 as series heads back to Milwaukee
A rough end to an otherwise solid effort puts Boston's season in jeopardy.

Some of the best plays of the game captured in images.

AFP
Celtics reflect on squandered opportunity to win Game 5 vs. Milwaukee Bucks, how to approach Game 6

Jayson Tatum, Jaylen Brown, and Marcus Smart all had plenty to say about letting the game slip through their fingers…

Milwaukee's comeback took the Celtics by surprise -- and put their season in danger.