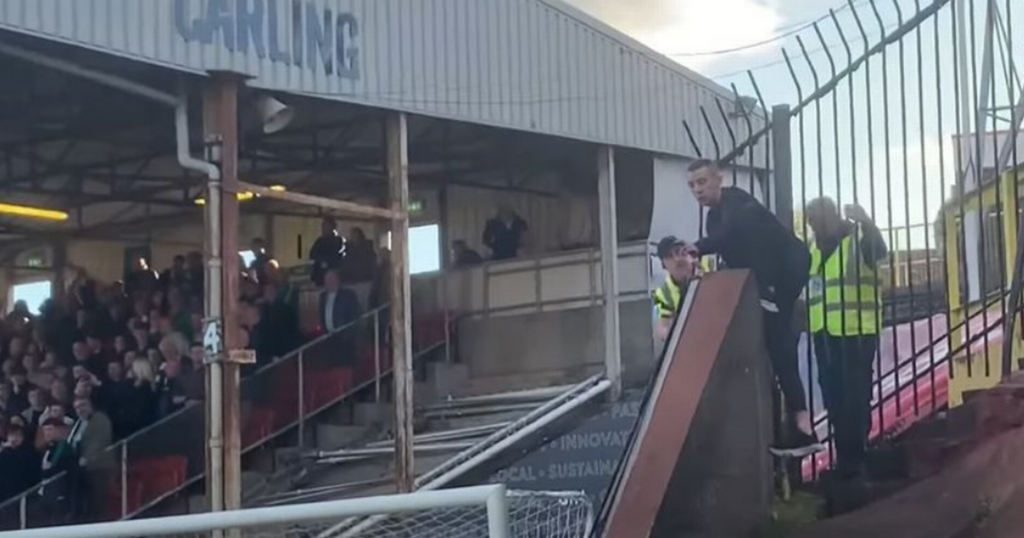 Here are the main headlines from the Daily Record website today.

The video shows fans descending on Tannadiceahead of the Hoops' clash with Dundee United just before the 7.30pm kick off…

A Celtic fan who clambered along a 20-foot high wall before hurling flares into a section of supporters has been locked up for almost a month.

Noon was remanded in custody until June 6 by Sheriff Alistair Carmichael on Friday after a court heard his behaviour sparked fury among supporters.

Noon - who committed the offences after being freed early from a jail term - begged the sheriff to free him on bail for the preparation of background reports.

But Sheriff Carmichael said: "I will give you a chance by continuing the case for background reports, but I'm not going to release you because I can't trust you."

Noon, who has been held in custody since the match, admitted acting in a threatening and abusive manner at Tannadice on the evening of 11 May.

He admitted climbing an external wall and standing on it to repeatedly shout and gesticulate in an offensive manner towards rival supporters.

Noon, Downs Street, Springburn, Glasgow, also admitted having pyrotechnic devices and throwing them towards supporters a few minutes after kick-off.

Fiscal depute Sarah High told Dundee Sheriff Court: "I can confirm he threw the pyrotechnics towards other Celtic supporters."

The court was told that Noon had travelled to the game on a supporters bus from Springburn and had lost his friends between the bus and the stadium.

Solicitor Anika Jethwa, defending, said: "He did have a ticket and he was trying to find the friends he had lost. I asked why he didn't walk round to find them, but he states that the stewards weren't letting people walk to different stands.

"Under the influence of alcohol, he decided he would go back that way to find his friends."

Noon clambered up and along the stadium wall, hurled abuse at home fans and threw three unlit flares, one of which was caught by a police officer.

Ms High said: "At 7.50pm, a male was reported to have climbed an external wall of Tannadice. The accused was seen to make his way towards the Carling Stand. The wall was narrow, with a 20ft drop on one side and a large fence at the other side."

Noon made his way along the wall which came to an end at a further 10ft drop.

"The accused then turned to Dundee United supporters and began to gesticulate towards them," Ms High added.

She said Noon's actions stirred up "agitation" amongst the home fans and police quickly attended.

"The accused then went into the waistband of his clothing and pulled out what appeared to be a number of pyrotechnics.

"He threw three of the items into the Carling Stand, one of which was caught by a police officer. The police encouraged the accused down from the wall."

Noon was arrested 15 minutes into the match and was in custody at West Bell Street Station before the second-half had kicked off.

Defence solicitor Morgan Day, who appeared for Noon on Thursday, said: "He is a Celtic fan. He travelled through on his local supporters bus. He understands that he shouldn't have had them [pyrotechnics]."

Ms Day explained that Noon was throwing the flares to Celtic supporters who were asking for them, sensing he was about to be apprehended.

"They weren't lit," Ms Day added. "That is his position, he was passing them to someone else. I think they were of the view that he was about to be detained."

Ms Day explained Noon had spent four and a half years behind bars in total, having been convicted of various offences including traffic matters and theft.

He is awaiting sentence at Alloa Sheriff Court for having a SIM card behind bars and has an unexpired portion of a custodial sentence.

"He's currently working with Parkhead social work department in Glasgow. There have been a number of custodial sentences.

"He is struggling re-engaging with society following being in custody for such a substantial amount of time.

"He advises me that he suffers from ADHD and PTSD. He's been unable to seek support in the custodial setting. That was the first time he consumed alcohol since being released."

Sheriff Carmichael said: "There could have been all sorts of reactions, so it is a serious matter. I can see you are possibly institutionalised, having spent so much time in custody."

Ms Jethwa asked for the case to be put off for reports and said: "He's a little bit older and a little bit wiser - although perhaps after committing this - not the wisest."

Ms High said the Crown is seeking a football banning order and that will be considered when Noon is brought back for sentence next month.

The game finished 1-1, securing the league title for Celtic and ensuring Dundee United's return to European competition next season.

Here are the main headlines from the Daily Record website today.

The video shows fans descending on Tannadiceahead of the Hoops' clash with Dundee United just before the 7.30pm kick off…