Celebrity Treasure Island: The elimination you don't want to miss 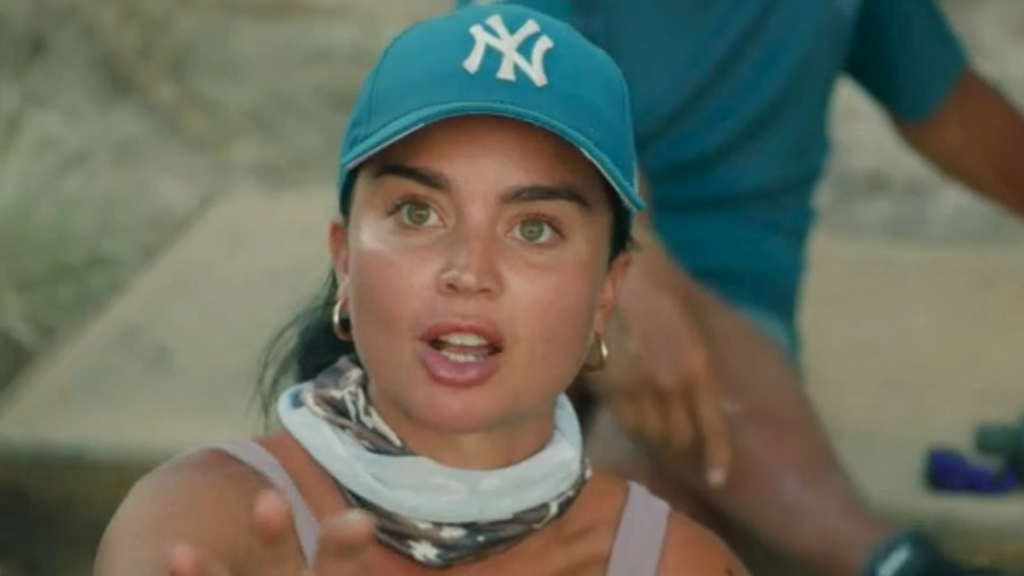 The whole start of tonight's episode wasn't very memorable but you know what was?

Edna Swart screaming at Lance Savali there was a tsunami warning in place.

"Do you think they'll let us ring our families? I don't even have anyone's number." The most millennial comment ever came from Savali as Swart hustled everyone in Repo to higher ground.

While Katipō took a more journalistic approach to the chaos.

"Kia ora good evening, scenes this morning from the Far North with a tsunami warning in place." Lana Searle started her news update before crossing live to Angela Bloomfield.

Searle really nailed her impersonation of Wendy Petrie and the moment kind of gave me deja vu.

Remember when the tsunami warning occurred, and Auckland was in its seven-day lockdown? Well, not much has changed except our seven-day lockdown has been going on for almost nine weeks. Everyone laugh right now or you'll cry.

Once the warning was lifted there was no time to waste on Celebrity Treasure Island, so everyone reluctantly scurried to the team face off but not before Chris Parker and the rest of Katipō had the opportunity to observe the closeness of Swart and Savali in Repo.

I'm telling you guys, that's the alliance to watch.

At the team face-off, host Matt Chisholm explained the teams would go through this weird spider web thing, throw bags onto barrels and then smash a pot with one of those bags. Seriously who comes up with these challenges?

Everyone was ready to go but Savali had to get something off his chest first.

He wanted to swap his captain's card with Katipō for four pirate coins. The card would mean that Katipō could swap out one of their members for another in an elimination round but they politely declined.

The team face-off came down to Savali and Searle throwing bags on the barrels, after a tense round it was Katipō who took out the win, again!

Winner, winner, they scored some pasta for dinner.

"The teams are even now and we are catching up. Game on," Parker told the confession cam.

Back at Repo, Savali was feeling pretty down in the dumps. "I had one job and I thought I could do it but I couldn't and I failed." The poor lad was really in his head and sadly it wasn't going to get any better for him.

Swart dropped the ovary agreement bomb in front of Repo and Brynley Stent sternly said "that was a secret Edna!" Whoops. But then Stent accidentally dropped the bomb that Swart brought a clue from the pirate market and oh god then Savali accidentally said Jess owed him because he saved her from the brutal elimination round that saw Kim Crossman go home.

Safe to say Candy Lane and Buck Shelford were not impressed with all the games being played by the youngsters.

"They talk a lot of shit, I tell ya." Shelford shook his head.

It was thankfully way calmer at Katipō and made me feel zen again. Bloomfield decided she wanted to go up for elimination and Parker would be the backup.

At the elimination round, Searle announced Boss Babe and business owner Edna Swart from Repo and legendary Shortland Street actress Angela Bloomfield from Katipō would face off.

"Edna is someone I would love to get rid of asap because she's so good," Searle conspired.

But in a move that no one saw coming, Savali played his captain card (you know the one he tried to sell to Katipō earlier? Hindsight is a beautiful thing) and decided to save Swart and put someone else from his team up for elimination.

It wasn't a nice moment when he announced it would be dancer and former judge of Dancing With The Stars, Candy Lane.

Lane took out the win against Bloomfield earning herself some pirate gold and Bloomfield went out happy. "All hail the ovary agreement." She laughed in her exit interview.

So because most of the episode was a yawn fest, we obviously had to have all the drama packed into the last three minutes.

Swart made the terrible decision of asking Lane how she felt.

"Thrown under the bus," Lane replied and lordy it spiralled.

Swart and Lane went back and forth, Stent was crying, Shelford was backing up Lane and Savali was sitting silently wondering what the hell was happening.

Lane more or less said Swart can talk the talk but can't walk the walk which almost made Swart have a nervy b.

"Don't put words in my mouth again. Let me talk now because you've had your chance to talk," a frustrated Swart sternly said with absolutely no regard for her elders. She then continued to talk to Lane like she had four brain cells.

Shelford jumped in and told Swart she can play her "silly little games" but don't stab your team in the back while you're doing it. And he didn't stop there, later telling the confession cam "I don't have enough time for Edna. It's dog eat dog and I'm a big dog. I eat a lot of meat."

Which I couldn't help but giggle at.

Oh happy days at Repo, come back next week to see how it all plays out.

For all the inside gossip and behind the scenes stories, listen to Inside Celebrity Treasure Island hosted by S2 contestant Kim Crossman!