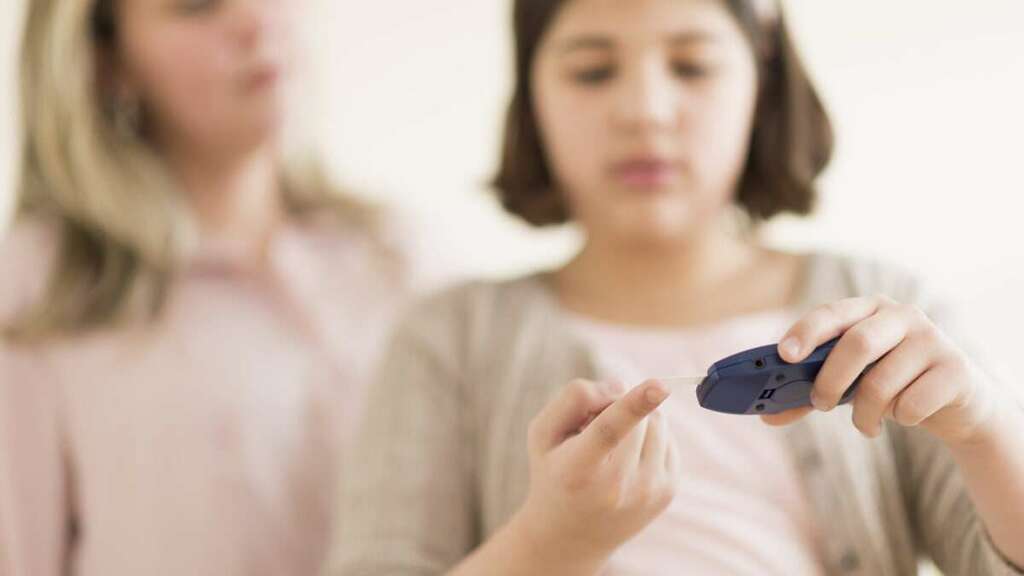 Does COVID-19 cause diabetes in kids? The list of scary COVID-19 complications continues to grow, with the U.S. Centers for Disease Control and Prevention (CDC) now saying that the coronavirus could increase the risk of children developing diabetes. But there may be some serious flaws in the CDC's study and subsequent reporting on it.

"Persons aged <18 years with COVID-19 were more likely to receive a new diabetes diagnosis >30 days after infection than were those without COVID-19 and those with prepandemic acute respiratory infections," the CDC announced on January 7.

CDC researcher and lead study author Sharon Saydah told The New York Times that the study—which did not distinguish between Type 1 and Type 2 diabetes—illustrates the importance of getting kids vaccinated and of behaviors like wearing masks. Similarly, the CDC summary says that the study "highlights the importance of COVID-19 prevention strategies in this age group."

Both statements suggest COVID-19 could cause diabetes in kids.

But there are several reasons to be skeptical of the idea that COVID-19 causes diabetes in children, as opposed to just being correlated.

Vinay Prasad, a hematologist-oncologist and an associate professor at the University of California, San Francisco, details some such reasons, calling the study "embarrassing." But first, Prasad notes that in absolute terms, the number of kids with COVID-19 in the databases who also had diabetes was quite small. In one database, it was 68 out of 80,000, or 0.08 percent, compared to 0.03 percent for kids who didn't have COVID-19. In the other, "the risk of diabetes post COVID19 was 0.25% (a quarter of 1 percent)," compared to 0.19 percent for kids without COVID-19.

"The CDC trumpets this finding as 'children and teens 18 years & younger who have had #COVID19 are up to 2.5 times more likely to have a #diabetes diagnosis after infection,'" notes Prasad. "Is that a fair take away or a fear-mongering distortion?"

It's also important to note that the study only included children who received an official COVID-19 diagnosis, sought medical care for it, and used health insurance, not all kids who had COVID-19. This means the absolute risk could be even smaller.

There are at least several other limitations with the CDC's implication of causation. For one, it hinges on the idea that the cohort of children who develop COVID-19 are exactly alike with the cohort of children who do not. "But COVID may be more likely to affect kids of lower socioeconomic status, of certain races, and kids who were already overweight or suffering from medical problems," Prasad points out.

Differences in weight, family income, etc., might make kids who get COVID-19 at a heightened risk of diabetes, independent of COVID-19 status.

"Does the CDC attempt to correct for any of these confounders? Not at all," notes Prasad. "They surely have height and weight, and could adjust for BMI, but do not. I am truly puzzled as to why."

Another confounding factor is the decreased activity and increased weight gain experienced by children during the pandemic. These things could trigger more cases of diabetes (independent of whether a kid has had COVID-19) and explain why diagnosis was more likely in recent years than in pre-pandemic times. ("COVID-19 might have indirectly increased diabetes risk through pandemic-associated increases in body mass index, a risk factor for both serious COVID-19 illness and diabetes," the researchers point out. "Future studies addressing the role of comorbidities and increases in body mass index in post–COVID-19 diabetes are warranted.")

In addition, kids who get medical attention for COVID-19 may be subjected to more tests than those who were treated for a less novel respiratory illness. And these additional blood tests could lead to more diabetes diagnoses.

It's still possible that COVID-19 leads to children developing diabetes. But this study doesn't really tell us that.

New York City will allow legal but noncitizen immigrants to vote. "The measure applies to legal residents, including those with green cards and so-called Dreamers who were brought to the country illegally as children but were allowed to remain under a federal program known as DACA," reports The New York Times. It's expected to allow more than 800,000 noncitizens to vote in New York City elections.

Lawsuit seeks to end antitrust exception for baseball. Almost 100 years ago, the Supreme Court "ruled that professional baseball was exempt from the Sherman Antitrust Act passed three decades earlier, which meant teams could collude to suppress wages and dictate the fortunes of member clubs in ways that would be illegal in other big business spheres," notes The Washington Post. "Now, a century later, lawyers representing four of the 40 minor league franchises that lost their affiliations with major league teams last year are hoping they have the right case to bait the Supreme Court into ending that exemption once and for all." More:

Lawyers representing the Staten Island Yankees and three other teams filed a lawsuit to the U.S. District Court in the Southern District of New York in late December. In the suit, they argue that Major League Baseball's decision to end big league affiliations with those minor league clubs represents anticompetitive behavior in violation of the Sherman Antitrust Act — collusion on the part of MLB and its member organizations to eliminate the free market's role in determining which franchises survive and which do not.

More importantly, they argue that the unique antitrust exemption that has allowed MLB to violate that act in various ways for years is "anachronistic" and should be cast "into the dustbin of antitrust history," citing the court's own skepticism about the baseball exemption as written into its landmark decision about amateurism in NCAA v. Alston last year.

• The U.S. Department of Defense has a new office ​to study "unidentified aerial phenomenon."

• "So far, web3 has been more like a buzzword that's designed more to confuse than to illuminate, and it's causing something like an identity crisis for the tech industry — with implications for the rest of us," suggests David Ingram at NBC News.

• Omicron by the numbers: "In New York City, Boston and Chicago — cities with some of the country's earliest Omicron surges — deaths have followed cases at a slightly reduced scale than in previous peaks. But because of the extraordinarily high case count, even a proportionally lower death toll from the current case curve in the United States could be devastating."

• Interesting findings from a new study on policing:

This whole thread, on diff perceptions of policing by Blacks and whites.

But esp this: a majority of Black respondents feared being searched by police MORE than being robbed.

• Reason's Brian Doherty reviews A World After Liberalism, which "details the rise of a young right that finds reactionary ideas relevant and appealing."

• In Kazakhstan, "at least 164 people have been killed and more than 5,000 detained" during recent protests, CNN reports. "Deadly protests that erupted in the Central Asian country in recent days have seen the government resign and the declaration of a state of emergency as troops from a Russia-led military alliance have been deployed to help contain the unrest."