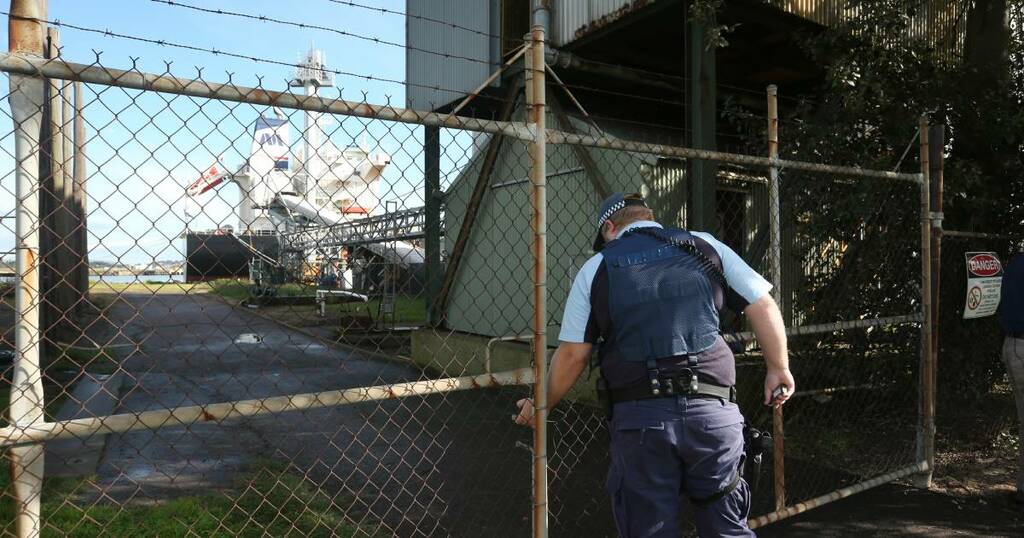 Police have released images of two people they want to speak with in relation to a diver who died with $20 million worth of cocaine nearby at Newcastle port this week, as a man charged in connection to the massive drug haul was extradited from Queensland to face court in Sydney.

Meanwhile, investigators are looking into whether the load brought into Australia attached to a ship - with the crew apparently unaware - is linked to 179kg of cocaine seized in Indonesian waters at the weekend.

Strike Force Groove detectives are looking for a man described as being of South American appearance, about 178cm tall and of an athletic build.

They are also searching for a woman of a thin build, about 150-160cm tall with a tanned complexion and blonde-grey hair.

NSW Police Organised Crime Squad commander Detective Superintendent Robert Critchlow said investigators believed the pair were in the Newcastle area between May 1 and May 11.

He said police executed several search warrants in recent days - including one at a property in Wallsend - where detectives "located quite a few pieces of evidence which have been of great assistance".

Detective Superintendent Critchlow said police were investigating how the pair entered the country and that there was an indication they arrived "through maritime means" - though not on the ship that brought the cocaine.

Meanwhile, police say they are following a strong line of inquiry looking into whether the shipment is connected with 179kg of cocaine picked up near Java.

Several media outlets around the world have reported that the Indonesian Navy recovered the drugs, with a street value between $117 million and $120 million, floating near Merak port on Sunday.

It was reportedly Indonesia's largest ever cocaine seizure.

A diver wearing what police described as "high-end" scuba gear was found by workers in the water at the Port of Newcastle's Berth Two on Monday morning, along with 54kg of cocaine.

There were attempts to revive the man - a foreign national from South America - but he died at the scene. The coroner has determined he drowned and police are investigating the man's diving equipment.

Detectives believe the cocaine seized is only a portion of what was brought into Australia through Newcastle on the Aret. Gr Majuro - a bulk carrier from the Marshall Islands that last stopped in Argentina a month ago - and that another 50kg made it into the community.

A second crime scene was established up-river of Berth Two, where a bale that appeared to have carried the drugs was found broken open and empty.

"This is clearly a high-level, very organised, sophisticated operation spanning the globe - it's directly moving large amounts of dangerous drugs from South America, across the oceans, to Australia," Detective Superintendent Critchlow said.

"The logistics of this operation are huge, with many moving parts.

Meanwhile, a Queensland magistrate on Friday ordered that James Blake Blee, who was charged in relation to the drug haul earlier this week, be handed over to NSW Police.

Mr Blee, a 62-year-old superyacht captain, was arrested on Wednesday afternoon allegedly trying to board a flight from Cairns Airport to Singapore, with a one-way ticket.

Cairns Magistrate Jacqui Payne denied his bid for bail and he was due to arrive at Sydney Airport late Friday afternoon.

Investigators are looking for information about two vessels seen in the area after the ship's arrival on Sunday night - a rubber duck-style boat and a five metre Quintrex aluminium runabout with a green stripe on the side. The Aret. Gr Majuro is due to depart Newcastle at 7am on Monday.