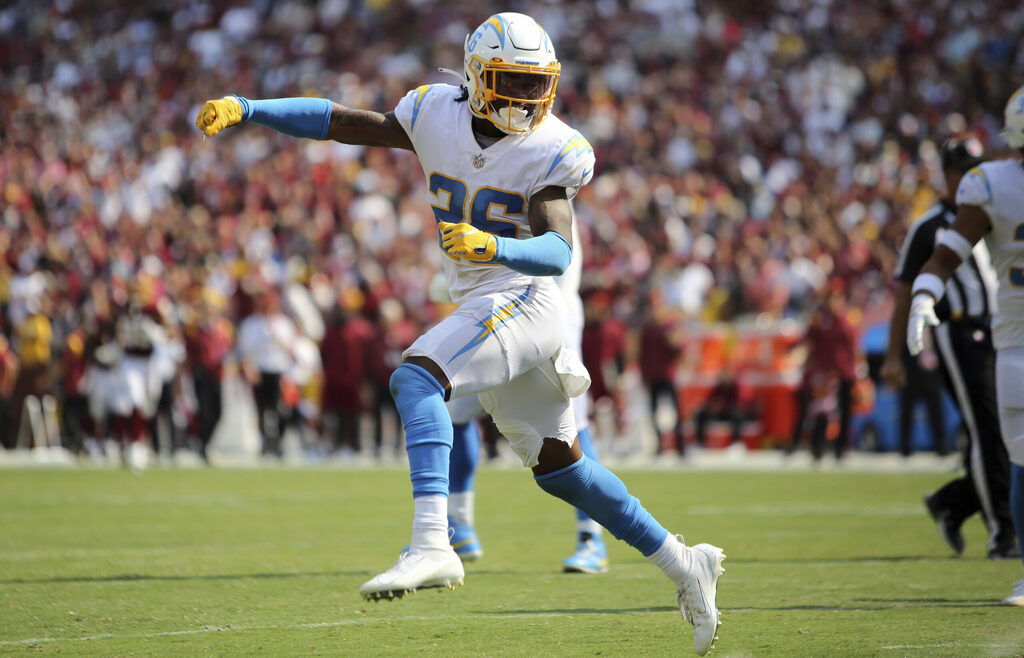 The Chargers held Washington to just 133 yards passing in the season opener this past Sunday.

While the pass rush took some of the pressure off of the secondary, there were a handful of positive plays that occurred in the defensive backfield.

Among the notable contributors was rookie cornerback Asante Samuel Jr.

Samuel’s name was first called early in the second quarter when he committed a pass interference penalty in coverage on wide receiver Dyami Brown. It led to a Dustin Hopkins field goal.

Even though he got a little handsy, Samuel was not entirely responsible for the penalty. After the game, head coach Brandon Staley said Samuel was doing his job on the play, and that safety Nasir Adderley made a “poor read.”

While it resulted in 35 yards being tacked on the play, how Samuel responded is what demonstrated his resiliency.

On the following drive, Samuel was targeted on back-to-back plays and his tight coverage on Brown both led to incompletions, with the end result being a punt.

Following a ticky tacky pass interference call, Asante Samuel Jr. responded on the next drive with tight coverage on Dyami Brown on consecutive plays, resulting in a punt.

Good eyes to diagnose coupled with the quick trigger to judge/attack the catch point.#Chargers pic.twitter.com/ibV6hql6DN

Fast forward to the fourth quarter, Samuel made a big stop on Brown in the open field that went for a tackle for loss. The play led to Hopkins attempting and missing a field goal from 51 yards out.

Asante Samuel Jr. is a consistently strong tackler and excellent patrolling the flat to his side.

Quick twitch and fearless are two things that makes Samuel so good at what he does.#Chargers pic.twitter.com/oZbcqQ1U7V

Another noteworthy play also came in the fourth quarter when Samuel made the initial contact on running back Antonio Gibson’s fumble which came after quarterback Justin Herbert’s interception in the red zone.

Samuel finished the day with five tackles and a tackle for loss, as well as an 84.5 tackling and 73.3 run defense grade, according to Pro Football Focus.

Aside from the penalty, he showed why Los Angeles drafted him. The team needed another starting corner, and they got one in Samuel, who brings playmaking in both coverage and run support.