HUNTER Catholic school teachers and support staff striking over pay and conditions have taken their fight to their employer's front door, where they demanded their voices be heard.

Independent Education Union of Australia NSW/ACT branch Newcastle organiser Therese Fitzgibbon said around 700 people from across the Diocese of Maitland-Newcastle's 58 schools wore yellow and waved placards at a rally in Wickham Park before they marched to the Catholic Schools Office (CSO) singing Hear Our Voice, a version of Solidarity Forever.

Staff inside the building were seen applauding their colleagues participating in the protected industrial action.

"But what they don't seem to be seeing is the fact that student learning is being disrupted every single day."

Ms Fitzgibbon said there was a shortage of people joining the profession and an increase in the number of people leaving it, due to a lack of work-life balance, unsustainable workloads and non-competitive pay.

The union is calling for a pay increase of between 10 and 15 per cent over two years; two more hours release from face-to-face teaching per week; an end to staff shortages; a reduction in paperwork; and for support staff to immediately be given pay parity with their public school colleagues.

Ms Fitzgibbon said the staff shortages meant Aboriginal education teachers, learning support teachers and executive staff were being used as casual teachers; teachers were teaching outside their subject area and feeling they couldn't stay home when sick; and classes were being "collapsed" and students spread across their schools.

"Teachers are being asked to sacrifice their time, their family's time to put their teaching first," Mr Criticos, the head of HSIE, said.

"When I first started teaching I could go home, work for about an hour and it was done and I was ready to start my day fresh. I'm [now] working into 10 or 11 o'clock at night sometimes."

He said while he didn't have family commitments, colleagues who did were spending less time with their children and still starting the day with unfinished work.

"The interactions within the staff room - there is none anymore, there's none of that collegial supportive environment because everyone is so focused down on doing their work and that detracts from what teaching is. We're a collaborative and collegial workforce that need to work hand in hand together in order to go further and to develop our students... it feels that no-one is happy.

"We are tired and we are ready to walk away, but we can't do it because our students will always come first."

IEU chapter representative at St Paul's Catholic College Booragul Sarah Gardiner said teachers at the school had just finished their internships but were looking to leave the profession due to the workload.

"I can't imagine myself doing anything else, I've only ever wanted to be a teacher and I love my job so much - and even I'm thinking 'I don't know if this is sustainable to have life balance'," she said.

Ms Gardiner teaches English and Studies of Religion and is the year nine leader of wellbeing and engagement.

"I'm a single person at the moment, I don't have any kids but it's something I want to have, and I don't think with this workload I have right now I'd be able to do both, honestly."

Ms Gardiner said teachers felt they were spread too thin, unable to give 100 per cent and exhausted, working before and after school and on weekends.

"We have all these initiatives that are really data driven and I see the value in it, but we don't have the time to collect the data appropriately, to analyse the data and then implement it to actually improve student outcomes.

"It's kind of like this vicious cycle of wanting to do better and loading us up with extra things we need to do, but we're not actually achieving the goal we want to achieve, which is to improve student outcomes."

She said shortages were hitting hard, four years after teachers were "lining up" for work.

"We're screaming out for help, we're screaming out for the things we need, what's it going to take, how bad does it have to get before action is taken to improve it, it makes me worried... I just can't see how much longer we can keep going like this, honestly, the kids are the ones who are suffering the most."

She said she was "really upset" the diocese had not yet fully matched the Department of Education's 2019 payrise to support staff.

"[They said] 'We'll pay you some this year and the balance in 2023', well how about a bit of retrospective pay, how about we try and at least get it all this year and a bit back for the couple of years we've missed out on. I'm really disappointed we're not being valued... my responsibilities are just getting more and more."

Newcastle MP Tim Crakanthorp - whose wife, mother, father and grandmother are or were teachers - told the rally that educators were "champions of the pandemic" and needed "more than a pat on the back".

IEU NSW/ACT assistant secretary Liam Griffiths said the rally was one of 10 being held across NSW and ACT involving almost 18,000 IEU members from 540 schools.

He moved a resolution that expressed "dissatisfaction" with Catholic employers and called on them to take "immediate steps" to meet the union's claims for improved pay and conditions.

"Urgent action is now required to address the staff shortages impacting all Catholic systemic schools in NSW and the ACT," he said.

It was passed unanimously and presented to CSO director Gerard Mowbray.

Mr Mowbray said on Thursday that the diocese leadership supported teachers and schools' general staff "receiving a meaningful pay increase and improved benefits for the important job they do".

"Accordingly, we have already provided a backdated pay increase for 2022 above the current enterprise agreement and agreed to at least match any pay increase our government counterparts provide to public school teachers," he said.

"We will continue to advocate for our teachers, but the reality is we are bound by the funding we receive from government and the fees we ask our parents to pay.

"While we respect our staffs' right to take industrial action, we are disappointed by their plans to strike and the inconvenience this causes to our students and families.

"While their actions won't change our ongoing commitment to negotiate with them in good faith or, to provide them with the best outcomes we can, it will significantly impact students and their families.

"This is particularly disheartening given the disruption they have already endured over the past two years due to the pandemic.

"However, we look forward to returning to our negotiations and concluding these in a timely and effective manner for teaching and support staff." 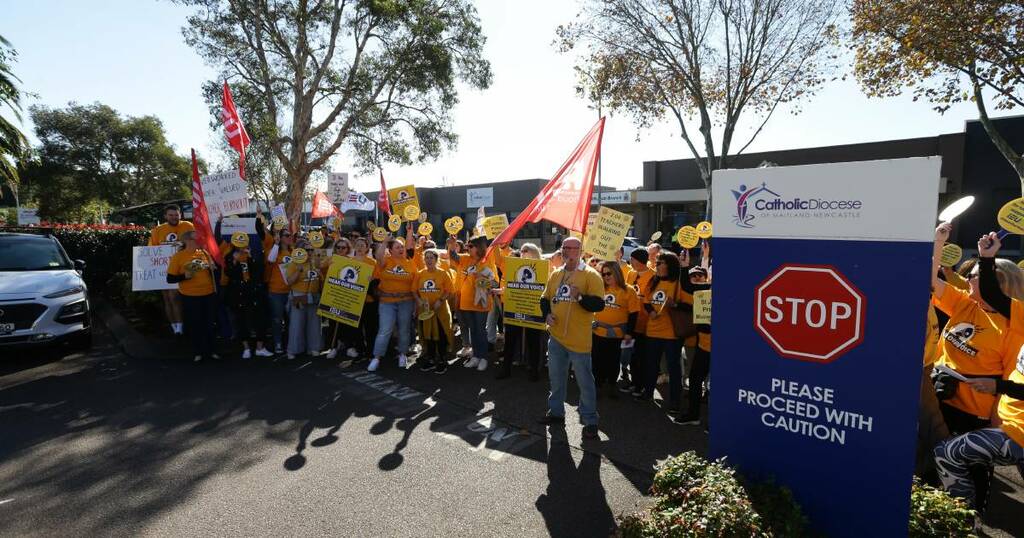