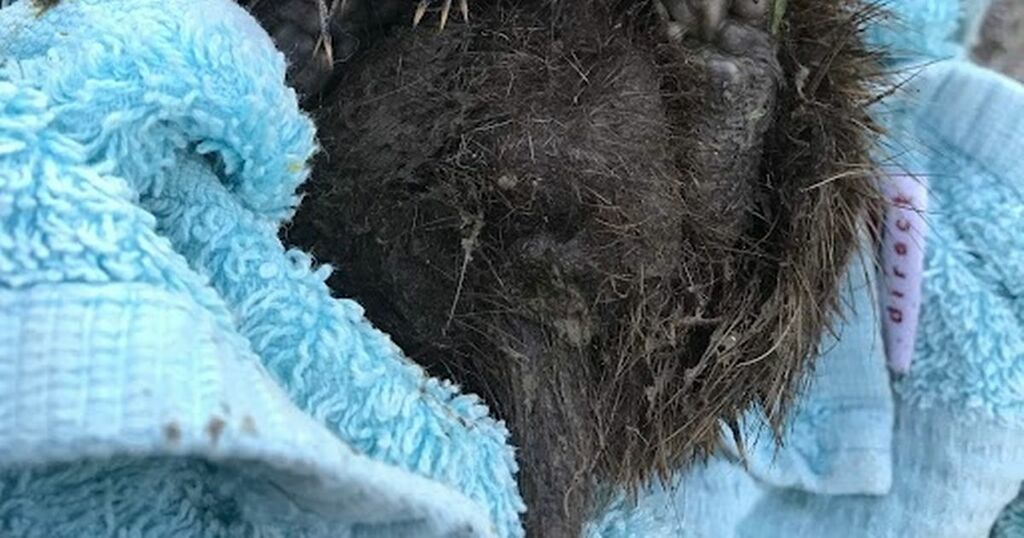 WARNING UPSETTING CONTENT: The postie is heard speaking a few words before passing the delivery to the girl as the…

A family say they have been left horrified after their beloved cat was found stuck in an 'illegal animal trap' less than quarter of a mile from their home.

Cory the tabby cat had to have his right hind leg amputated after being found lying under a hedge caught in the contraption near an allotment. It is believed he was lying there for four days with the killer device gripping his paw before a neighbour found him and took him to a vet.

Today his owner Marie Difolco spoke of the horrifying ordeal and how she has considered moving from her home in Greenside, Gateshead, because she can't bare the thought of living close to someone who she believes used an illegal device to intentionally harm her beloved pet.

Marie said: "I think people's biggest fear with cats is always the road and before this happened that was my biggest fear too. It's horrific if a cat gets run over but you kind of learn to accept it because people don't get in cars to hurt cats."

She added: "I think what really traumatised us is that we went out night after night shouting his name - and you're convinced you can hear him - while he was lying there for four days in this trap with no food or water, and because the trap is so heavy he wouldn't have been able to move very far. I think that being such a young and healthy cat is the only thing that saved him."

Cory left his home on February 11 and Marie started to become concerned when he didn't return home for food the following morning. After 24 hours they began to panic and started sharing posts on social media and her two children, aged 12 and 14, put posters up around the local community.

On February 16, Marie received a call from Moorside Referrals vet in Cramlington, Northumberland, to say Cory had been brought into them. The neighbour, who found Cory after investigating why her dogs had been barking at the bottom of the garden for days, took him to Cramlington after believing Cory would need to be cared for by a veterinary trauma centre.

Marie said: "One of my biggest worries is there are still people around here who are using that sort of thing and it could happen again. It could take a child's toes off if a child stood on it and it's a horrific thought that something like that could happen.

"It's really disturbed me and I know it sounds silly but I keep thinking I want to move house. We haven't lived here long and I just keep thinking I don't really want to stay where this horrible thing has happened to my cat because it just upsets me so much."

The 54-year-old said that the trap was tested and believed to have been left in the area recently due to being in such a good working condition. And although owning or selling the trap would not be an offence, using the device has been illegal in the UK since 1958.

Marie added: "If you do want to stop animals coming onto a property there are plenty of humane ways of doing it. There's stuff you can put down or traps where you can release an animal later. It sickens me to the core that there's people out there who still think using a device like that is OK.

"It's traumatised the whole family because we still have moments when we look at him and we think 'somebody did that to you on purpose, somebody wanted to hurt an animal.'"

As well as finding who is responsible for leaving the trap, Marie hopes her experience will help raise awareness of the dangers of animal traps and encourage people not to use them.

A Northumbria Police spokesperson said: "Following a report of a cat being injured in the Greenside area of Gateshead in February, our Wildlife Enforcement Team was contacted by a concerned pet owner. A member of the team carried out a thorough investigation into the incident, including making door-to-door enquiries and attempting to gain CCTV from the area.

"The owner believed the cat may have injured their leg in an animal trap owned by a local resident, however, there was insufficient evidence to prove this was the case. The investigation has now been closed and the pet owner fully updated."

WARNING UPSETTING CONTENT: The postie is heard speaking a few words before passing the delivery to the girl as the…