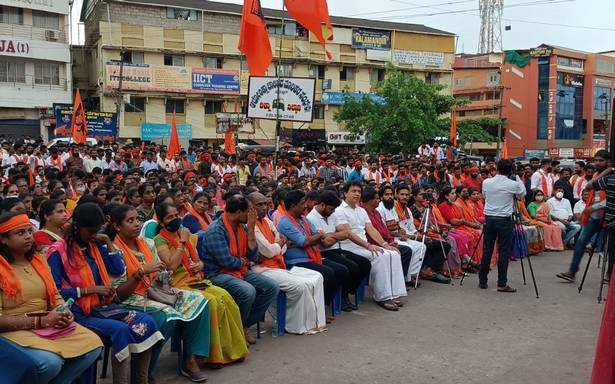 Police have filed a case against right-wing activist Chaitra Kundapura on the charge of making a hate speech at a Bajrang Dal and Durgavahini programme in Surathkal on October 4.

Surathkal police booked her on October 7 under Sections 153 A (promoting disharmony, enmity or feelings of hatredness among different groups) and 505 (2) (statements promoting enmity, hatred or ill-will) of the Indian Penal Code on a complaint filed by Abdul Khader of Iddya.

Ms. Kundapura, in a speech which has gone viral on social media, is heard warning a particular community to stop ‘Love Jihad’. “If that community continues with ‘Love Jihad’, Bajrang Dal workers will start doing the same with women from that community,” she said. She warned that ‘Bajrang Dal activists will convert all Muslims in two days’ and ‘will bring Muslim women out of their houses, make them remove their burqas and apply kumkum (vermilion)’.

The complainant alleged that Ms. Kundapura has made insulting statements against Muslims and Christians. She has attempted to disturb communal harmony.

An activist of the Democratic Youth Federation of India (DYFI) Bondala Chittaranjan Shetty had also filed a complaint with Surathkal police on October 6. Mr. Shetty had accused Ms. Kundapura of using certain words to defame a religion. He accused her of hurting the religious sentiments of that religion and also posing a threat to communal amity.

Police registered the case on October 7 after seeking legal opinion.