Cars damaged by an erosive substance in 'distressing' incident 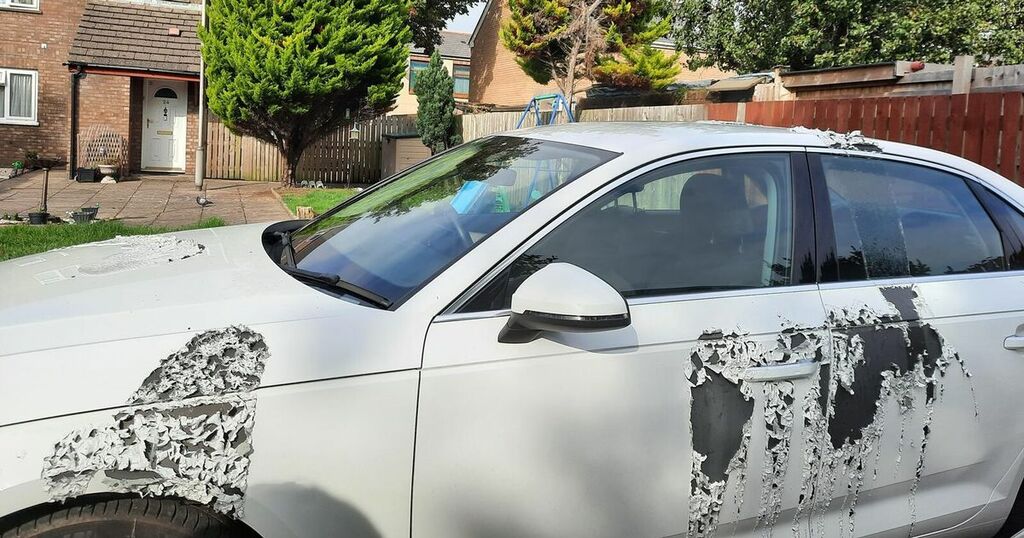 Cars have been damaged on a Cardiff street after an 'erosive substance' was thrown over them.

An individual was spotted on CCTV walking into the private parking area on Catherine Street in Cathays, Cardiff at approximately 9:15pm on the evening of Friday 8 October.

They were caught on camera with a plastic bag before throwing a substance over their car and another vehicle. A resident said that the person then briefly left the car park but "within a minute" returned and did the same to two other cars.

The resident, who did not want to be named, said that, from the CCTV footage, the incident lasted approximately four minutes before the individual is seen walking onto Catherine Street.

They added that a neighbour had taken their dogs outside about 10-15 minutes after the incident had occurred and said that they had seen something on the resident's car that they assumed was dirt at the time.

However, the next morning a neighbour raised the alarm when they saw the extent of the damage that had been caused to the four cars and called residents outside.

"Then you had the panic, the shock, and then phoning the police who came out straight away to be fair," the resident said.

Neighbours initially believed that paint stripped had been thrown on the cars, the resident said.

"We looked closer and the other neighbour's car has had their light melted at the front," they added.

The resident, who says that they had only bought their car 10 days before the incident, is now waiting for it to be taken into a garage to assess whether the damaged can be fixed.

"They said they'll take my car in and hopefully they can fix it, but if they inspect the damage and it's bad then it could be classed as a write-off," they said.

"It's just gutting. I'm just glad that the neighbour didn't come out a couple of minutes earlier - imagine."

"It's just a shock to everyone," they continued.

A spokesperson from South Wales Police said: "Officers have attended and spoken to all four victims whose vehicles were damaged at around 9pm on Friday, October 8.

"All four cars had significant damage from what appears to be an erosive substance. It is not known why these cars were targeted and enquiries are continuing to identify the person responsible.

"This is a distressing incident for the car owners and their families. We would appeal for anyone with information to come forward quoting occurrence *354586."

Get the latest stories from CardiffOnline straight to your inbox with our newsletters.