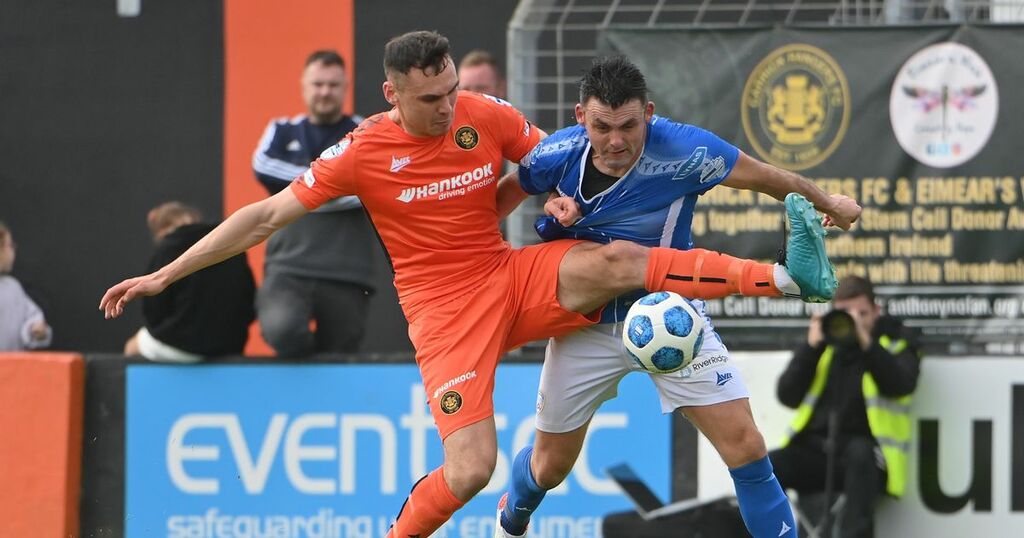 And with the 26-year-old now facing a lengthy spell on the sidelines, the club has signalled its commitment to the player by drawing up a new contract.

McNulty’s current deal is set to expire at the end of the season, but Rangers are willing to offer the centre back another year until 2023.

Carrick boss Stuart King said: “The club is ready to offer a new contract to Lee to give him a bit of security and take away any uncertainty he may have as he starts his recovery.

“I can’t commend my chairman Peter Clarke enough for coming to me with that offer. I’m delighted the club is showing a bit of faith in the player.

“We want to give Lee an extra year now to help reassure him that as a club we’ll be looking after him.

“I have been in similar positions as a player when I maybe broke an ankle and was out of contract at the end of the season. It’s not a nice place to be.

“As well as dealing with the physical recovery, you’re also dealing with a lot of insecurity and concerns about your future, so hopefully this helps put his mind at ease.

“Lee is one of my boys, he suffered a serious injury playing for this club so it is important we look after him as best we can.”

King admits he was wracked by emotion as he consoled a distressed McNulty immediately after the player's injury 71 minutes into Saturday’s game.

“That’s the first time I’ve faced a situation where one of my players has been in severe distress and it’s something I don’t want to experience again,” he said.

“I have been there before as a player when I broke my ankle and shattered my wrist, but it was a lot different dealing with that situation as a manager.

“I actually felt useless and I don’t mind admitting I found it tough to deal with. Lee was in real pain on the pitch and I told him to grab my hand.

“We actually laughed about it afterwards because the big man is over six feet tall and he’s got hands like shovels, so he nearly broke my wrist.

"Truth be told, I'm a bit of a softie in those situations so I warned him I'd probably get a wobbly lip and be tortured by all the boys.”

King, who was appointed Carrick boss in June, has been touched by the messages of support he has received since news of McNulty’s serious injury broke on Saturday afternoon.

“Everyone hammers the Irish League, but everyone has been brilliant,” he said. “I’ve been inundated by messages, particularly from players who have been hurt previously.

“Glenavon fans were also outstanding and the support we have received from other people around the league has been absolutely fantastic. It means a lot to Lee and the club.”

McNulty, who was taken to Craigavon Hospital for treatment before being transferred to Enniskillen, near his home, was released from hospital on Sunday.

He will undergo a further MRI scan to determine the full extent of ligament and tendon damage to his ankle when the swelling subsides.

NIFL confirmed on Monday that Carrick's 4-0 win would still stand despite the game being abandoned following the player's injury.