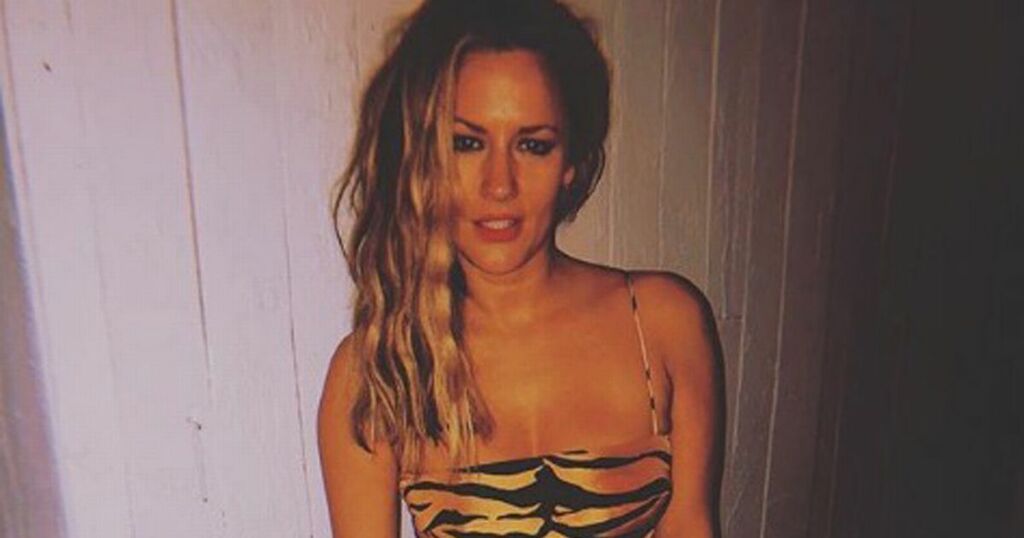 Caroline Flack stunned her fans on Sunday with a sexy snap of her bare cleavage.

The braless TV presenter teased her 1.9 million Instagram followers as she flashed her assets under a sheer black top as she stood in front of a mirror and her glam table.

Caroline is perfecting her sultry post in the stylish black and white photo, which she let speak for itself.

The post came as the TV star admitted she's secretly been 'dying inside' during some of the most high-profile moments of her year.

Despite enjoying success with Love Island and then scoring the coveted role of Roxy Hart in Chicago, the TV host has revealed that behind the smiles she was actually feeling wretched.

Sharing a collage of happy images of her best moments from the last 12 months, Caroline wrote: "My top 9..... funny isn’t it... I look so happy ... except I know in 4 of those pictures I was dying inside."

One image shows her posing in a pink dress at the Love Island final, which took place soon after ex-fiancé Andrew Brady announced their split without apparently telling her, and then met with Celebs Go Dating bosses.

She's said to have been the one who pulled the plug after he was accused of hooking up with another woman after a night out in Chester - claims he denied.

They got back together in September, with Apprentice star Andrew spotted moving his things back into Caroline's north London home.

But by mid November it was all off again, and he ended up calling an ambulance to her home after a boozy row.

According to The Sun, he feared she was planning to take an overdose, but Caroline set the record straight.

"The article is a ridiculous embellishment of a non-event," her spokesperson said.

“While an ambulance was called to Caroline’s address at the beginning of November, it was entirely unnecessary and paramedics found her to be in perfect health.

“They confirmed there was no emergency or reason for any concern.”

And earlier this month, she confirmed they were done, but hinted she's still very much in love with him.

"I’m on my own now. So I’m sorting myself out, I’m doing what I want to do. I’m putting my head into this, into work and focusing on acting," she told The Sun.

"Yeah, you know I like him. But I think we’re both doing what we need to do at the minute. We’re both looking after our own heads and doing our own thing."

And in her round up of the year, she admitted she's learned some big lessons in 2018.

"My top 9 moments were not represented by these pictures but by things that happened and will stay in my heart forever," she continued.

"I’ve learned many lessons this year mostly that everything is temporary... moments, feelings, people, flowers (RK)... and also that having a puppy is hard bloody work. Happy new year."