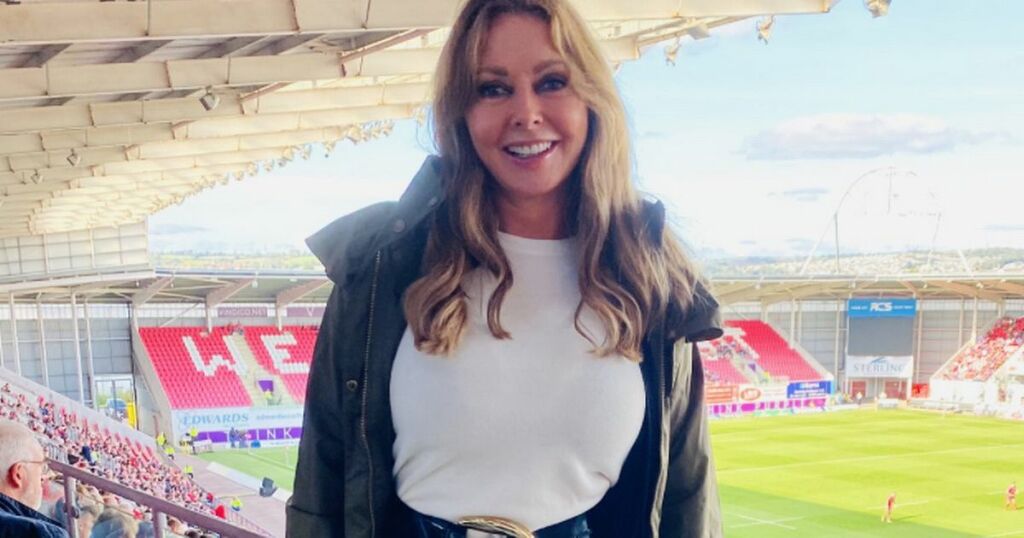 Carol Vorderman showcased her incredible figure as she backed her rugby team the whole way in red leather trousers.

The 60-year-old is a big fan of Welsh team the Scarlets and she was keen to let everyone know it.

The TV favourite wore a thick black statement belt and gold buckle as she cheered her team on.

The former Countdown star had temperatures soaring as she rocked up to Parc y Scarlets stadium in Wales in her team's colours - and let everyone know who she was supporting.

The star accompanied the outfit by some calf-high black leather boots and really turned heads in the stand.

She went to her first live game in "so long" - but the result didn't go her way.

Munster ran out east 43-13 winners as the Welsh club had a day to forget in front of their celeb fan.

She shared a series of photos with her friends at the stadium and offered a translation.

"Having a great time @scarlets_rugby....diolch yn fawr (thank you very much)" she wrote.

"Not been at a game for so long (covid)....come on bois. With naughty Wynne @wynneevans and Mooney @rupertmoon."

Fans were instantly enamoured with the snaps, as one posted: "Beautiful Carol!"

"Blossoming as always!" another fan chipped in, while a third penned: "Looking very sharp!"

On Friday, she flaunted her figure in a black bodycon dress.

She took to her Instagram Stories to share her mirror selfie with fans as she prepared for a radio show.

"Radio show time ooh put on a scruffy dress," the TV presenter captioned the post along with a few Welsh flag emojis.

The mum-of-two added that she would be doing another workout session with her personal trainer, Mel Deane, later in the day.

Earlier this year, Carol revealed her abs started appearing as a result of the keto diet she was on.

The TV star embarked on a new health journey and was aiming to lose weight by ketosis.

She previously discussed her keto diet and said she puts a knob of butter in her coffee in the morning as it makes her less hungry.